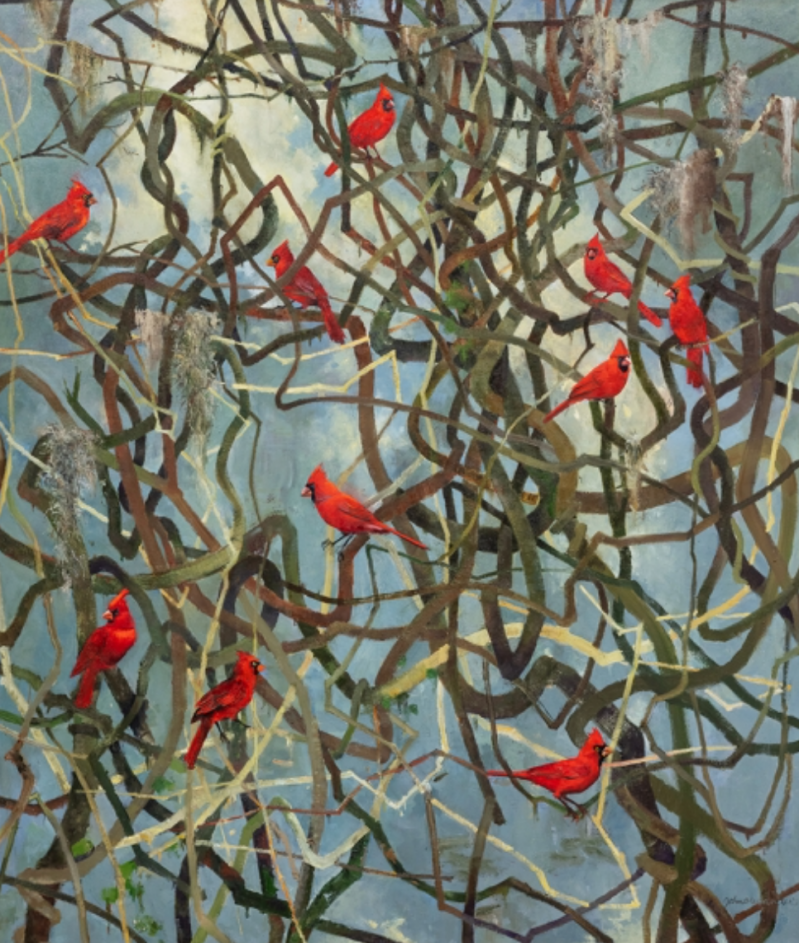 John Alexander’s most recent body of work is on view at Berggruen Gallery in East Hampton.
Jenny Gorman
By Mark Segal

John Alexander Solo
An exhibition of recent paintings and drawings by John Alexander, who divides his time between Amagansett and New York City, is on view at the Berggruen Gallery in East Hampton through Sept. 12. A reception will be held today from 5 to 7 p.m.

Mr. Alexander’s most recent body of work features a detailed collection of botanicals, sea life, birds, and animals, inspired by keen observations of his environment, filtered through his imagination, and rendered with thick, gestural strokes of paint.

“Each work is imbued with an authentic, raggedly pristine, emotional sense of the earth we inhabit,” said the gallery.

Nava's Outlandish Creatures
Pace gallery will present an exhibition of works on paper by Robert Nava at its East Hampton space beginning Thursday.

All created this year, the vibrantly colored drawings depict the unusual creatures the artist is known for inventing, taking "inspiration from prehistoric cave paintings, ancient Egyptian art, Art Brut, contemporary cartoons, and other varied sources," as the gallery said.

The exhibition remains on view through Aug. 29.

A Unique Montauk Venue
Max Levai, the former president of the Marlborough Gallery, has opened The Ranch, a 26-acre former horse farm in Montauk, as a venue for the exhibition of art.

The four sculptors exhibiting in “Camp Hero” are linked by “an underlying ideology that both depends upon and exceeds surface appearance,” according to a release.

Ms. Druks, a California artist embedded in the occult cauldron of mid-century Los Angeles, worked on the make-up and production design of Kenneth Anger’s “Inauguration of the Pleasure Dome.”

Based in Puerto Rico, Mr. Lind-Ramos creates assemblages from discarded objects or gifts from his neighbors.

Visits to The Ranch are by appointment only and can be arranged through theranch.art.

Solo at Colm Rowan
“Swing,” a solo exhibition of sculpture by Bret Reilly, an artist, gold record-winning singer-songwriter, and furniture designer, will open on Saturday at Colm Rowan Fine Art in East Hampton with a reception from 4 to 7 p.m. It will be on view through Aug. 29.

Inspired by Giacometti and Degas, Mr. Reilly’s sculptures consist of slender, elongated figures of white papier-mache, accented by a colorful pair of real shoes. Almost life-size, the figures are at play, primarily on swings but in other physical activities as well.

Mr. Reilly has said his aim is to capture “the intimacy of private moments, and the catharsis of freeing ourselves from inhibitions.”

Eugene Brodsky at Studio 11
“20/21,” a solo exhibition of new work by Eugene Brodsky, will open at Studio 11 in East Hampton with a reception Saturday from 3 to 6 p.m. and remain on view through Sept. 12.

Mr. Brodsky’s works are complex compositions of different, sometimes dissonant components. He focuses on both image and process, occasionally including cartoon figures in otherwise abstract works and “finding the hard way to make things that absolutely don’t look hard to make,” he told The Star in a 2015 interview.

The work in the exhibition was made during the pandemic, when he had to find new ways of getting what he needed to work while enjoying “the complete freedom to screw up.”

Art in the Garden
Five artists now exhibiting at the Leiber Collection in Springs in its Garden of Friends will be on hand Sunday afternoon at 4 to discuss their work. Participants are Jeremy Dennis, Philippe Cheng, Toni Ross, Bastienne Schmidt, and Almond Zigmund.

Abstraction at Phillips
“Abstract by Nature: Paintings from the 1950s to the Present,” is on view at Phillips Southampton through Sept. 6. The exhibition includes works from Abstract Expressionism and Color Field painters such as Jules Olitski, Hans Hofmann, Adolph Gottlieb, and Kenneth Noland, along with the contemporary painters Mark Grotjahn, Jennifer Guidi, and Petra Cortright.

Also on view will be the first pop-up of The Invisible Collection, a selection of contemporary products from veteran and emerging designers, as well as paintings by James Prosek, whom The New York Times has called the “Audubon of the fishing world.”

The centerpiece of “March Pictures,” Mr. Gahl’s show, is “Quilt,” a five-panel work that depicts characters in different stages of rest, their heads emerging from a coverlet that takes up most of the paintings. Some of the panels employ traditional pattern and representation, while others are more abstract.

The work in “Fall Apart in My Backyard” focuses on anthropomorphized trees, whose arms, heads, and hands move in and around branches and trunks, while nervous smiles and wide eyes peer out from the leaves.

Two Shows at Markel
“Re-Merge,” an exhibition organized by Heidi Lee Komaromi, an art adviser and curator, and “August Women,” a show of paintings and sculpture by 11 contemporary artists, will open today at Kathryn Markel Fine Arts in Bridgehampton and continue through Sept. 6.

“Re-Merge” includes work by 10 artists who use new technologies to raise awareness about ocean conservation and ecology. In the courtyard, a digital installation is presenting digital NFT artworks in collaboration with the online platform UltrArt. A reception will be held today from 6 to 8 p.m.

Engel at Kramoris
“Reverence for Road Signs and Travelers," a show of recent work by Christopher Engel, will open today at the Romany Kramoris Gallery in Sag Harbor and remain on view through Sept. 2. A reception will happen Saturday from 5 to 6:30 p.m.

The works in the exhibition reference calligraphy, graffiti, tar patches, and ripples in water. Faces and figures swirl with numeric symbols, words, and collaged images, reflecting the artist’s conviction that “we each are a part of something that never ends.”

“Clarity” at Grenning
“A Clever Clarity,” a show of work by five painters, is on view at the Grenning Gallery in Sag Harbor through Aug. 22.

Stephen Hannock’s landscapes include several works from his “Flooded River” series and two nocturnes that capture the desolation of Western buttes and prairies. Steven Levin, on the other hand, focuses on human exchanges, such as “Looking at Rembrandt,” a museum interior.

Sarah Lamb’s still life paintings feature flowers in a glass vase, a branch of lemons, and a rooster weathervane, while Melissa Franklin Sanchez’s oil paintings on metal catch the play of light on an ordinary door. Also on view are Ramiro’s studies for a massive commission for a cathedral in Williamsburg, Va.

New at Living Room
“Puffer Halo,” a show of mixed-media works by Elaine Stocki, is on view at the Living Room in East Hampton through Aug. 22. Taking the oval as their starting point, the seven new pieces use watercolor, linen, and canvas to create works that absorb the traditions of Color Field painting, Abstract Expressionism, and assemblage.

“The pieces celebrate the tradition of oil painting and defy it with a ring of hand-stitched scraps,” said the gallery. A selection of furniture organized by Fairfax Dorn Projects is also on view.

This article has been modified from its original and print version to add the exhibitions at Pace and the Living Room.