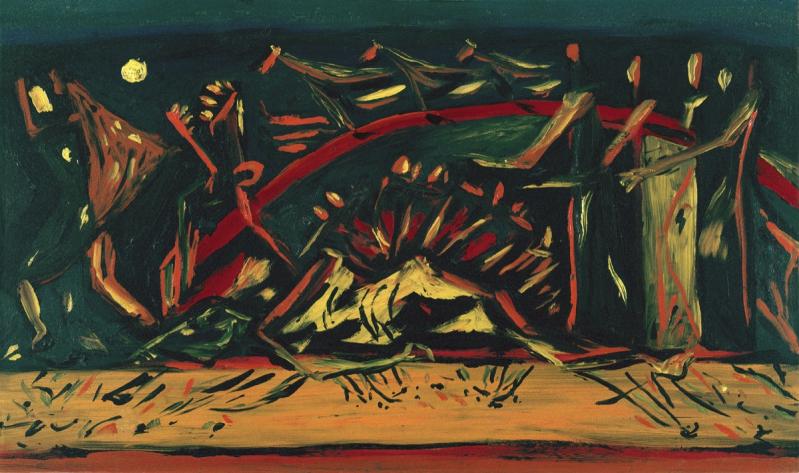 “Picasso in Pollock,” an exhibition that uses examples of both artists’ work to illuminate Picasso’s influence on Pollock, will open Thursday at the Pollock-Krasner House and Study Center in Springs and remain on view through Oct. 31.

Although the two artists never met, Picasso loomed large in Pollock’s formative years, especially from the late 1930s to the mid-'40s. In “Form and Chaos,” an essay by Pepe Karmel that accompanies the exhibition, the scholar includes a revealing anecdote:

“Lee Krasner recounted that when she and Jackson Pollock were still living in New York, she once heard something fall in his studio and then Pollock yelling, ‘God damn it, that guy missed nothing!’ She went in to see what had happened. ‘Jackson was sitting, staring; and on the floor, where he had thrown it, was a book of Picasso’s work.’ ”

The exhibition, which includes original works and replicas, was inspired in part by “Untitled (Composition with Red Arc and Horses)” (ca. 1938), the only painting by Pollock in the center’s permanent collection. That painting features a stylized horse’s head derived from the screaming horse in “Guernica.”

Another inspiration was provided by Pollock’s engravings from the mid-'40s, which contain Picasso-inspired imagery and are on loan from the Pollock-Krasner Foundation. Pollock’s only mosaic, a large panel created for the W.P.A. Federal Art Project, is also on loan from the foundation, courtesy of the Washburn Gallery in New York City.

"The exhibition is especially appropriate for us, given the relevant pieces in our holdings and our longstanding, mission-driven dedication to interpreting Pollock and Krasner’s achievements in a global context,” said Helen A. Harrison, director of the study center.
Picasso’s work was readily available to artists in the city, according to Mr. Karmel. In addition to numerous gallery exhibitions there during the '30s, the Museum of Modern Art presented “Picasso: Forty Years of His Art” in 1939.

Pollock also owned several books dedicated to Picasso, including Sidney and Harriet Janis’s “Picasso: The Recent Years 1939-1946,” which was given to him by Peggy Guggenheim.

Ms. Guggenheim wrote in her memoir, “When I first exhibited Pollock he was very much under the influence of the Surrealists and of Picasso. But he very soon overcame this influence, to become, strangely enough, the greatest painter since Picasso.”

The study center is open Thursdays through Sundays, by advance online reservation only.