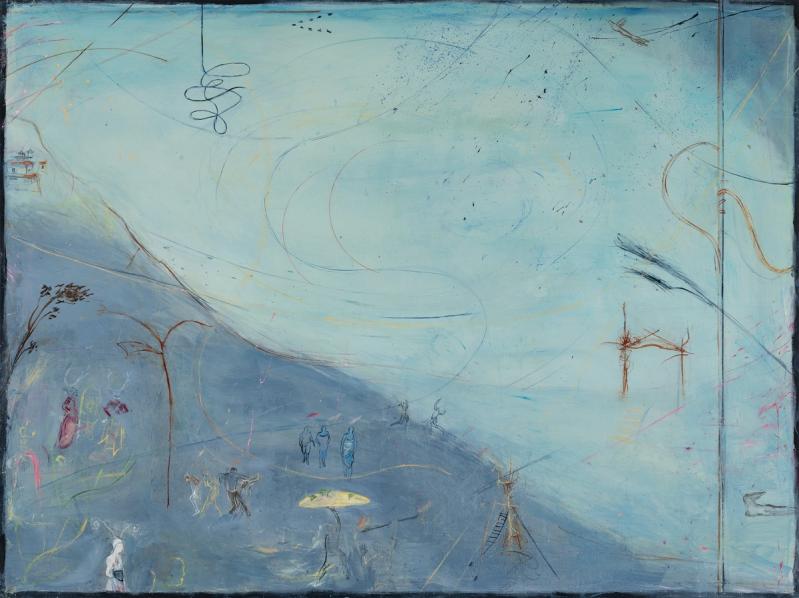 Jennifer Cross's "Coming and Going" (2021) is on view at the Arts Center at Duck Creek in Springs.
Gary Mamay
By Mark Segal

Two exhibitions of work by East End artists, Charles Manion of Montauk and Jennifer Cross of Springs, will open at the Arts Center at Duck Creek on Saturday with a reception from 5 to 7 p.m.

“Charles Manion Cerulean Blue and the Devil” will occupy the John Little Barn, whose rough-hewn walls suit works that “straddle the line between painterly sculpture and constructed paintings,” says the center.

Mr. Manion collects objects, many of them discarded, such as wood pallets, mosquito netting, tarps, and driftwood, which he repurposes to build dynamic compositions. A bricoleur (French for do-it-yourself), he makes work from a diverse range of things that happen to be available.

Some of his pieces are created by cutting swaths of stretched canvas from the frame, revealing the armature beneath. A series of shaped canvases are made from fragments of sailcloth, circus tents, and other found textiles. His stretchers are built or carved to accommodate the form of each painting, and the physical characteristics of his materials are as important as their final form.

“Present Tense” features a body of work started by Ms. Cross last year that records what she has described as “my shifting unmoored state of mind during this time, and represent themes of fragility, mourning, reclamation, and impermanence.”

Inspired by newspaper photos, dreams, art history, and objects in her studio, the images are painted in thinly veiled washes of color. Her process involves building up, wiping out, adding and subtracting. The play between gravity and disintegration, she has said, is related to her visceral responses to pandemic-related news reports and politics.

“Present Tense” will continue through Aug. 29. Mr. Manion’s work, which is the first of two related exhibitions, will remain on view through Aug. 15. “Wayne Magrin, His Brother From Another Mother,” will open on Aug. 21.

Of the connection between Mr. Manion and Mr. Magrin, who lives on the northern beach of Sydney, Australia, Julian Schnabel has written, “The regenerating anti-gravity machine called painting and/or the sea has drawn Charlie and Wayne to its banks from its different poles. And the forms that they have derived from both perspectives have radically different appearances. Yet the resonance of humidity and fog and white water are indelibly evidenced in ways that only those who know the sea would do.”