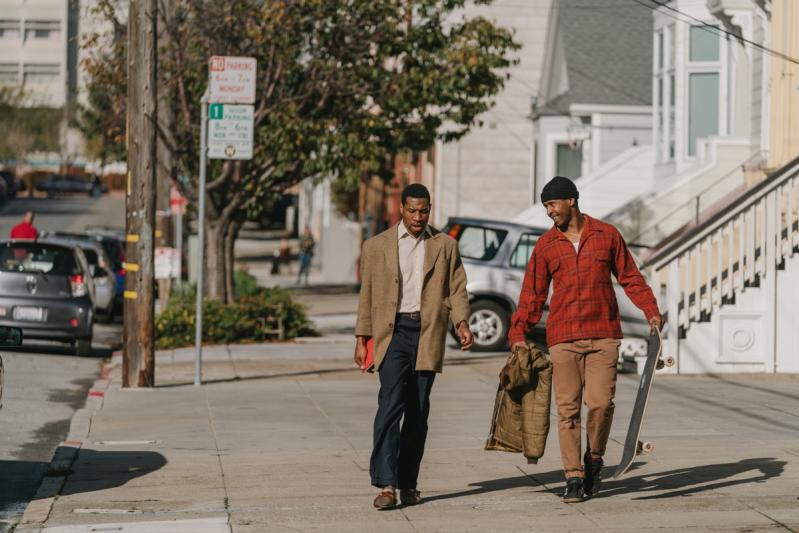 Jonathan Majors and Jimmie Fails struggle to adapt to a rapidly changing city in "The Last Black Man in San Francisco."
By Mark Segal

The stigma attached to mental illness, the impact of gentrification on Black communities, and persistence in the face of adversity and self-doubt are the themes of the second annual Black Film Festival, a co-presentation of the Bridgehampton Child Care & Recreational Center and the Parrish Art Museum. The two-part festival will take place outdoors at the Water Mill museum at 8 p.m. Friday and Friday, July 30.

Gregson H. Pigott, Commissioner of the Suffolk County Department of Health Services, will introduce this week’s program, which will kick off with “elephant,” Gladys San Juan’s 15-minute drama about Nicole, a woman in her late 30s who is suffering from a crippling depression that she is trying to keep secret from her husband, children, and employer.

The program will continue with “The Last Black Man In San Francisco,” Joe Talbot’s narrative feature about Jimmie, a young man who dreams of reclaiming the expensive Victorian house his grandfather built in what is now a gentrified neighborhood. Joined by his best friend, he searches for a place in a rapidly changing city that has left them behind.

The film, which stars Jimmie Fails, on whose life it is partly based, with Jonathan Majors, Danny Glover, and Tichina Arnold, is populated by skaters, squatters, street preachers, playwrights, and other locals living on the margins.

“My Father the Mover,” a 13-minute film from South Africa, is the story of a woman who motivates children to find their superpowers but can’t discover her own. It will be shown on Friday, July 30, followed by “Shaina,” a feature from Zimbabwe about a teenager and her friends who are struggling with a host of grown-up problems.

The films were selected by a committee representing both the child care center and the museum, as well as the Witness Project of Long Island and the county health department's Office of Minority Health.
Before both screenings, at 7, the museum will offer a tour of its current exhibition, “Tomashi Jackson: The Land Claim,” which centers on the experiences of communities of color on the East End. Corinne Erni, the Parrish's senior curator, will lead the tour, which will be available only to Black Film Festival attendees. Advance registration for the tour, through the museum’s website, has been strongly recommended.

Tickets to the programs are $15, $5 for Parrish and child care center members. Guests have been advised to take chairs, as the museum will not provide seating.