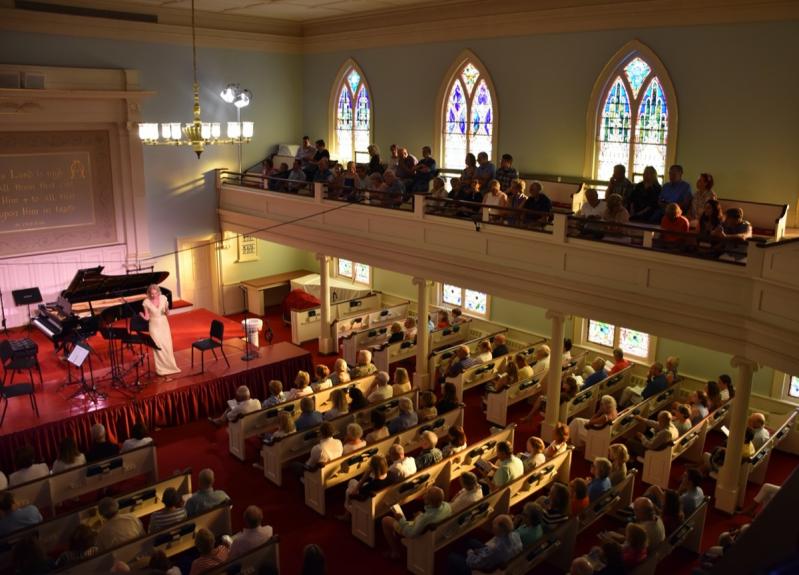 The Bridgehampton Chamber Music Festival will return to some of its favorite venues on the South Fork, including the Bridgehampton Presbyterian Church.
Michael Lawrence Photos
By Thomas Bohlert

The Bridgehampton Chamber Music Festival's summer season will be back onstage and in person, following a pandemic year of limited online programs and silent spaces. From Aug. 4 to Aug. 22, there will be eight hour-long programs, five of them with repeat performances.

"I felt that we need comfort food right now, we need to be pampered, we need to be refreshed and have our bodies and brains restored," said Marya Martin, the founder and artistic director of the festival. The music will include "some of the great masterpieces, as I feel as if we all deserve this sitting back and relaxing."

In the festival's 38th season, its schedule will be a bit less full than it was two years ago, but the familiar elements will be there.

It will begin with a portrait of a composer, this year focusing on J.S. Bach; specifically, his Partita in D Minor for violin solo and its last movement, the extraordinary Chaconne. The violinist will be Jennifer Koh, who has been critically acclaimed for her recent recordings of "Bach & Beyond," in which she pairs Bach's Sonatas and Partitas for solo violin with 20th and 21st-century works inspired by Bach.

Once again, Alan Alda will be the narrator. The actor is writing his own script for the concert, as he has done in the past. "It's fun for me," he said last week. "Usually I get to search through the letters of the people, so I can tell their story in their own words. But there aren't many letters that exist of Bach, and so I am relying on the town records, and they tell a story that's full of humanity."

For example, he said, Bach "could lose his temper really easily, and he could push to get what he wanted from the town officials or whoever he was employed by, and he would get them angry at him in turn."

The Chaconne, which in itself is about 15 minutes long, was written at a very poignant time in Bach's life. He returned home after a period of travel, and found that his wife had died while he was away. Ms. Martin said, though, that the Chaconne "is not sad or tragic; it is just profound. It is filled with raw emotion. Bach didn't necessarily do 'down' music. His music was always thoughtful and full of reason for being."

The back-to-back programs, at 5 and 7 p.m., will be performed at the Bridgehampton Presbyterian Church, the main venue for the series. There will be a question-and-answer session with the audience at the end, a new feature.

The music festival's annual benefit concert, titled "Joy in Gathering," will take place on Aug. 7 at the Atlantic Golf Club in Bridgehampton, with music for winds and strings by Mozart and Spohr. "A Lotta Night Music" will feature works by Mozart and Thuille on Aug. 8, with a newly arranged version of "Eine Kleine Nachtmusik" for winds and strings by Ms. Martin. On Aug. 11, Schubert's Cello Quintet will be heard along with Sonata X for Two Cellos by Jean-Baptiste Barriere, with the cellists Carter Brey and Paul Watkins.

Beethoven and Brahms provide the "comfort food" on Aug. 15. Here, a sampling of vocal music, which doesn't often appear in this series, will be heard, with Gregory Feldman, a baritone who is making his first appearance with the festival, singing some of the Irish, German, and French folk songs set by Beethoven. This will be paired with the large-scale Piano Quartet in G Minor of Brahms.

The musicians' yearly performance at the Parrish Art Museum will be held on its outdoor terrace on Aug. 17, with Boccherini's Quintet for Flute and Strings in F and Tchaikovsky's "Souvenir de Florence" on the program.

Another annual event, the William Brian Little concert, takes place in the sculpture garden of the Channing Daughters Winery on Aug. 20, with wine and hors d'oeuvres at 6 p.m. and the concert at 7. Last year, Ms. Martin said, the program was to have included Vivaldi's "Four Seasons" and Astor Piazzolla's "The Four Seasons of Buenos Aires." This concert will include movements from those works, and in addition, she said, there will be a new commission and premiere. "I reached out to my dear friend Eric Ewasen, and I said, 'Would you write a piece to go along with the Piazzolla and the Vivaldi?' and he said of course, he would love to do it." Mr. Ewazen has composed for the festival a number of times in the past. This new work is entitled "Seasons of Our Time."

The season finale, "Uplift and Romance‚" will be held on Aug. 22, with two composers who are not heard so often. The "uplift" is from Nino Rota, an Italian composer who is known mostly for his film scores (including "La Dolce Vita" and "The Godfather"), but who also wrote symphonic works. His Trio for Flute, Violin, and Piano "is a crazy little piece -- it is very perky and full of energy," said Ms. Martin. The "romance" is from Max Bruch, known especially for his setting of "Kol Nidre" for cello, regularly heard on Yom Kippur. His Piano Quintet, like much of his music, had languished for some time, but was rediscovered about 30 or 40 years ago. "It is an incredible work; it is romantic, it is big -- talk about 'comfort music,' it will just roll over you and embrace you!"

For nearly four decades, the Bridgehampton Chamber Music Festival has brought its programming to the East End. A few years ago it added a spring series. Its newest addition, originally planned for last year, will be another three-concert series, "BCM Autumn." Most tickets for the summer festival are $45 and $65, with student tickets available. Information, including pandemic protocols to be observed, is on its website.