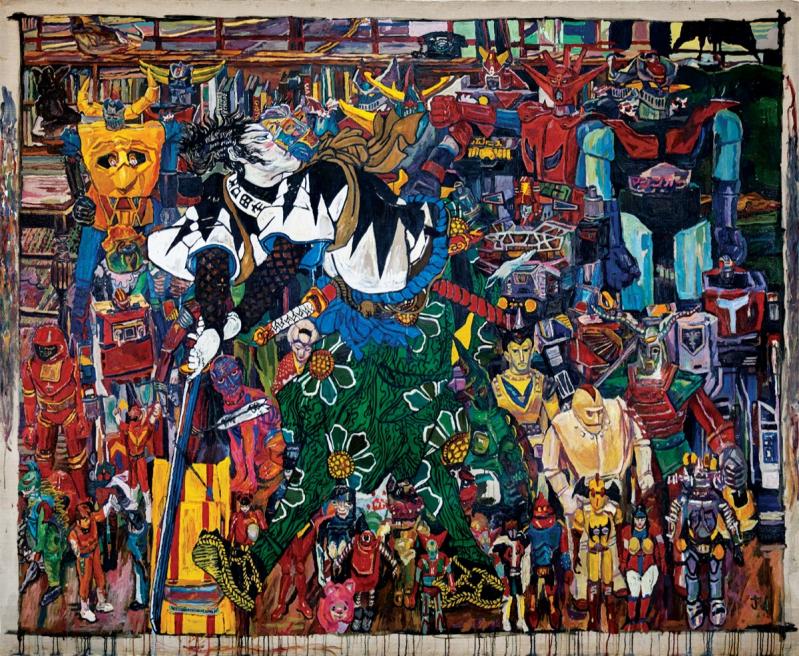 new show at the Mark Borghi gallery in Sag Harbor features the paintings of Jonathan Harkham.
By Mark Segal

Yung Jake's Metal
“Twisted Metal X,” a solo show of painting and sculpture by Yung Jake made entirely from heat-treated-and-warped Nerf guns, will open at Tripoli Gallery in Wainscott with a reception Saturday from 6 to 8 p.m. and continue through Aug. 24.

Yung Jake explores the intersections of technology and art across a wide range of mediums. Nerf Blasters are toy guns made by Hasbro that shoot foam darts, discs, or balls. Over the course of a year, the artist accumulated hundreds of used Nerf guns from Los Angeles and New York City, which he de-formed and wedged within wooden frames to create multicolored, all-over compositions that both reference and belie their source.

New at Borghi
“My Beloved Chogokin,” a solo show of paintings by Jonathan Harkham, opens Thursday at Mark Borghi in Sag Harbor, with a reception from 5 to 7 p.m. It will remain on view through Aug. 4.

The child of a mother from New Zealand and an Iraqi Jewish father, the artist grew up in Los Angeles, where he was influenced by the aesthetics of street culture, including music, skating, zines, and punk rock.

Mr. Harkham’s work is rooted in his multicultural upbringing and his travels. His canvases are densely packed with colorful images of Japanese toys, Samurai, and the occasional fragment of a streetscape.

Montgomery's Opus
The Fireplace Project in Springs will present “Opus Objects,” a solo exhibition of work by Candace Hill Montgomery from Saturday through Aug. 15, with a reception set for Saturday from 6 to 8 p.m.

The exhibition will include weavings, paintings, sculpture, drawings, and writings by Ms. Montgomery, who lives in Bridgehampton. An essay on her work by the artist Mary Heilmann will be published with the show.

A feminist and activist, Ms. Montgomery’s work has a political dimension that sometimes emerges through double entendres and plays on words. At the same time her use of materials such as horsehair, linen, leather, silk, and found objects lends the work a poetic lyricism.

Hartigan: "No Rules"
“No Rules,” a survey of the work of Grace Hartigan across three decades, is on view at Christie’s in Southampton through Aug. 8. Many of the paintings were inspired by the landscape of the East End, where the artist lived part time during the 1950s and ‘60s. Her circle of friends included Willem and Elaine de Kooning, Jackson Pollock, Franz Kline, Helen Frankenthaler, and many other notable artists.

In his catalog essay for the exhibition, Michael Klein, an art historian and curator, argues that while Hartigan has been “cast in the role of female Abstract Expressionist . . . As demonstrated by the show here, Hartigan’s appetite for new ideas and fresh approaches was integral to her thinking and working as a painter.”

Christmas in the Shed
This weekend only, East Hampton Shed, at 30 Blue Jay Way, is presenting “Christmas in July,” an exhibition of work by 16 artists that will be open Saturday from 5 to 9 p.m. and Sunday from noon to 5.

Painting at Markel
Kathryn Markel Fine Arts in Bridgehampton is presenting paintings by Deborah Dancy and Deborah Zlotsky in its downstairs space and, upstairs, paintings by Victor Pesce, in a show organized by Miles Manning, director of the Elizabeth Harris Gallery in Manhattan. The shows will run through Aug. 9.

Pesce, who died in 2010, is known for his still-life paintings, which feature novel color and spatial relationships in tightly organized compositions. According to the gallery, his work suggests the Metaphysical paintings of Giorgio Morandi.

Bilal's Reflections
“Behind the Veil: Musings of Muraqaba,” an exhibition of paintings by Imani Bilal, will open at Chase Contemporary in East Hampton with a reception Friday from 4 to 7 p.m. The show will remain on view through Aug. 8.

Muraqaba is an Arabic word meaning to watch over or meditate, and Ms. Bilal’s canvases, with their glistening resin surfaces, take on the characteristics of a mirror, both of viewers’ physical selves and, the artist hopes, of their inner beings. She has cited the technique, composition, and palette of Color Field painters as sources of inspiration.

Young at White Room
The work of Russell Young is featured in “Once Around,” an exhibition on view at the White Room Gallery in Bridgehampton through Aug. 15. Mr. Young is a British-American artist best known for large silkscreen paintings whose imagery is drawn from recent history and popular culture. The show includes screenprints of mug shots of David Bowie, Elvis Presley, and Jimi Hendrix.

Work by Jane Waterous, Percy Fontini Wright, Linda Colletta, Nelson De La Nuez, and Peter Strid will also be on view. A reception will take place Saturday from 5 to 7 p.m.

"Man vs. Paint"
The Grenning Gallery in Sag Harbor is presenting “Man vs. Paint,” a show of work by Viktor Butko, Anthony Ackrill, Marc Dalessio, and John Morfis, through Aug. 1.

Mr. Butko is showing moonscapes and late-winter snowscapes, painted recently on the East End, while Mr. Ackrill is represented by four figurative works that reflect his ability to handle paint and capture texture and surfaces.

Quarantined for much of the pandemic, Mr. Dalessio was able to paint several landscapes from his home in Portugal and while visiting France. Mr. Morfis continues his portraits of unique everyday items, among them three colorful sand shovels.

New at Romany Kramoris
An exhibition of paintings by Thomas Condon, Barbara Groot, and Gayle Tudisco is on view from Thursday through Aug. 12 at Romany Kramoris Gallery in Sag Harbor, with a reception set for Saturday afternoon from 5 to 6:30.

Mr. Condon’s paintings capture the play of shadow and light on streets and buildings in East Hampton and New York, where the absence of people creates a Hopper-like moodiness.

The energy of nature informs Ms. Groot’s abstract paintings, whose layered use of color and bold brushwork are offset by linear elements. Ms. Tudisco’s paintings include water views, marshes, barns, and boathouses, both on the East End and in Florida.

The show brings together artists with unique perspectives and diverse backgrounds, whose works are rooted in nature but take very different forms. More than 30 works by Cristina del Campo, Isadora Capraro, Megan Foster, Jack Henry, Michael Krondl, and the late Shimon Okshteyn will be on view through Aug. 29. A reception will be held Friday evening from 6 to 9.

Folioeast North
“Out East,” an exhibition organized by Coco Myers of Folioeast and Mary Cantone, the owner of William Ris Gallery in Jamesport, will open at the North Fork gallery on Saturday with a reception from 4 to 7 p.m. It will remain on view through Aug. 29.

Abstraction at Ezra
The Ezra Gallery in Sag Harbor will present “The Abstract Show,” an exhibition of work by 10 artists, from Sunday through Aug. 24. A reception will be held Sunday from 4 to 7 p.m.

This column was changed from the original and print versiosn to reflect a correction in the title of "Opus Objects," on view at the Fireplace Project beginning Saturday.