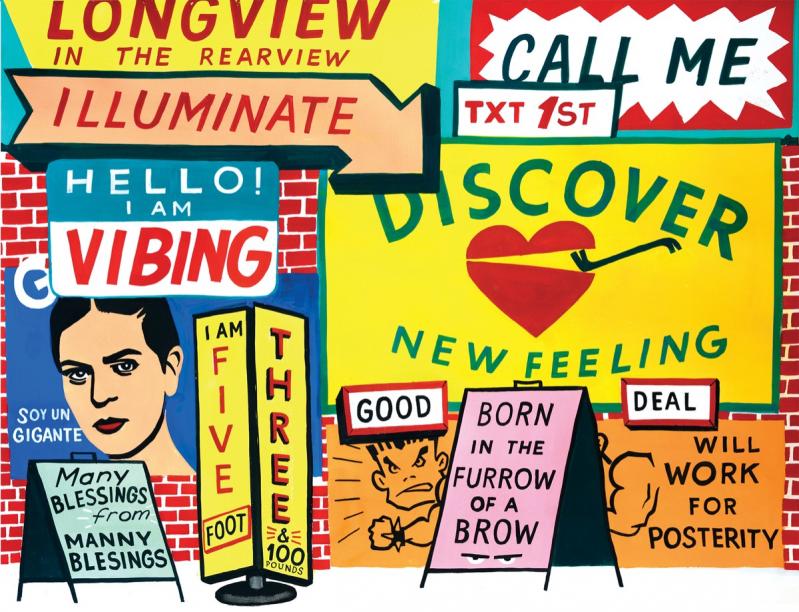 A work by Steve ESPO Powers will be on view in "Beyond the Streets on Paper" in Southampton beginning Saturday.
By Mark Segal

In a New York Times article about “Beyond the Streets,” a massive exhibition of graffiti held in Brooklyn in 2019, Jon Caramanica wrote, “It’s important to remember that graffiti was never just one thing. Within a few short years from when scrawled tags first went up on walls and trains, graffiti became marketing, fine art, politics and more. The form evolved rapidly and spread widely, captured in an eternal tug of war between external legitimacy and internal credibility, between the outlaw fringes and solvency.”

Two years later, “Beyond the Streets,” self-described as “a celebration of society’s most creative misfits . . . a platform for mark makers and rule breakers,” will leave its mark in Southampton, a most unlikely -- and graffiti-free -- location. “Beyond the Streets on Paper,” a show of more than 500 works by more than 75 artists from around the world, will open at the Southampton Arts Center on Saturday from noon to 5 with a free barbecue on the center’s West Lawn.

Organized by Evan Pricco, editor-in-chief of Juxtapoz magazine, and Kim Stephens, a curator at Beyond the Streets, the show explores experimental practices on paper by artists trained in and inspired by graffiti, street art, hip-hop, punk rock, zines, and underground art.

“It’s not very often you get to see so many world-renowned artists in one setting,” said Tom Dunn, the center’s executive director. “Shepard Fairey, Steve ESPO Powers, Martha Cooper, and many other exciting artists, some of which have never shown works on paper, will be part of this exhibition.”

On Sunday evening at 7:30, Ms. Cooper, a photographer who was one of the first to treat graffiti artists seriously and the co-author of the book “Subway Art,” will join a panel with Charlie Ahearn, the director of “Wild Style,” the first hip-hop film, and Roger Gastman, the producer of “Beyond the Streets” exhibitions. A screening of “Martha: A Picture Story,” Selena Miles’s 2019 documentary about Ms. Cooper, will follow the discussion.

In the early 1970s, the center of modern graffiti culture shifted from Philadelphia to New York City. At first, artists “bombed” trains, primarily with their tags, which usually paired a street number with a nickname. Within a few years, illustrations were added to tags, and graffiti spread beyond Washington Heights and the Bronx, eventually impacting the downtown music and art scenes.

Aside from a select few street artists who made the transition to art stardom, Jean-Michel Basquiat and Keith Haring among them, street art and hip-hop coexisted with the mainstream art world as a separate, outsider culture that challenged conventional definitions of what art could be. Fashion Moda, an alternative art space founded by Stefan Eins in the South Bronx in 1978, provided an important intersection for downtown artists, graffiti writers, and hip-hop.

“Beyond the Streets on Paper” celebrates street art’s challenge to authority by presenting a contemporary dialogue on individual expression. Because the works are on paper, an intimate medium, they offer a fresh approach to understanding the changes that have occurred in contemporary art and society over the past five decades, according to the center.

A pre-exhibition taste of the street art and downtown scene can be had Friday evening, when the center will present an outdoor screening of “Basquiat,” Julian Schnabel’s 1996 biopic about the artist’s meteoric rise but short life. Tickets are $12, free for those 12 and under. Gates open at 8, and the film will start at dusk.