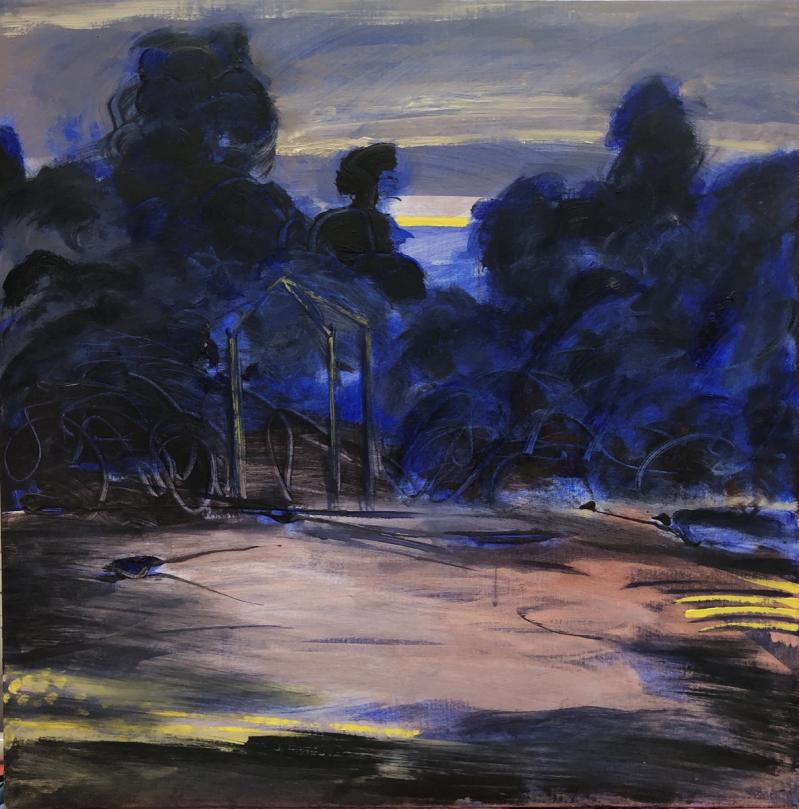 Roy Nicholson’s “Gloaming No. 6” from 1999 will be part of "Primarily Painting," a show opening at Ashawagh Hall on Friday.
By Mark Segal

Warhol at Skarstedt
The Skarstedt Gallery in East Hampton is presenting an exhibition of small-scale works by Andy Warhol from some of his most notable series, through Aug. 7.

Among the iconic subjects represented are Jackie Kennedy and Mao Zedong. Of the eight photos Warhol chose of the First Lady, two show her smiling just prior to the assassination, an image, says the gallery, that illuminated “the tragedy and subsequent grief.”

Warhol’s portraits of Chairman Mao were another example of his use of image repetition and the mass media. He made 199 paintings of Mao in five different sizes. The smallest, 12 x 10 inches, whose yellow, duck-egg blue, and crimson are overlain by the silkscreen print and gestural strokes, has a painterly quality.

New in East Hampton
Fairfax Dorn Projects, an interior design collective focused on the relationship between art and furniture, has opened the Living Room, a project space, on Park Place in East Hampton. “Shadows Spanning Two Nights,” a solo show of work by Miranda Fengyuan Zhang, is on view there through Sunday.

Ms. Zhang, who was born in Shanghai and lives in New York City, weaves recycled wool to create semi-abstract compositions that suggest gardens, animal silhouettes, rivers, and mountains, while at the same time emphasizing the properties of her materials.

Sculpture at Duck Creek
The Arts Center at Duck Creek in Springs is presenting “Liths,” two large-scale sculptures by Carl D’Alvia, which will be sited on its grounds from Saturday through Sept. 4.

The works in the “Liths” series explore sculptural dichotomies, with monumental works in painted aluminum whose hard edges suggest minimalism but whose bright colors and curving silhouettes link to the exuberant work of such artists as Elizabeth Murray and Alexander Calder.

Ancient monoliths are another source of inspiration for Mr. D’Alvia, although he undercuts the monumental quality by bending and curving his shapes and sometimes extending them along the floor. “Liths” is presented with the Hesse Flatow Gallery of New York and Amagansett.

Primarily Painting
A group show organized by Mark Perry, a painter, will be on view at Ashawagh Hall in Springs from Friday through Tuesday, with a reception set for Saturday from 5 to 8 p.m. While the primary focus is on painting, the exhibition will also include some collage and mixed-media works.

Two at Studio 11
Paintings and Porcelain,” an exhibition of work by Louise Crandell and Lana Kova, is on view at Studio 11 at the Red Horse Plaza in East Hampton through Aug. 8.

Ms. Crandell is showing paintings, created in oil and wax on linen during the pandemic, that “capture a sense of memory through fading or fragmented imagery,” according to the gallery.

Linoleum Collages
DieFirma, an artist-run platform anchored in New York, will return to Shelter Island on Wednesday with exhibitions of work by Bill Miller and Gloria Kisch.

“Bill Miller: In the Garden” will feature the artist’s most recent body of work, including complex landscapes, portraits, cityscapes, and interiors created by cutting and collaging vintage linoleum. Mr. Miller will be working on site and will also conduct workshops and conversations with members of the creative community.

Kisch, who died in 2014, was known for her large-scale mobile-like sculptures in bronze, aluminum, and stainless steel that she created on a 40-acre property in Flanders.

Reservations for the workshops and talks have been strongly encouraged. More information and a schedule of events is at diefirmanyc.com. The exhibition will run through Aug. 8.

Ned Smyth in TriBeCa
“Moments of Matter and Life,” an exhibition of Ned Smyth’s early post-Minimal sculpture from the 1970s and some of his most recent sculptural and photographic works, is on view at the Shirley Fiterman Art Center at Manhattan Community College in TriBeCa through Sept. 25.

Because the gallery is temporarily closed to the public due to Covid, Mr. Smyth designed the installation to be seen through the space’s large street-facing windows. Works by Mr. Smyth are also on view outdoors at Battery Park City.

Ms. Wong’s bulbous figures, usually naked and often with their eyes closed and in improbable positions, “hint at elusive and uncanny narratives,” according to the gallery. Mr. Faden’s images reflect the realities of vulnerable communities and draw parallels between the Covid pandemic and the AIDS epidemic.

Harper’s Gallery has also announced plans to expand, with a gallery set to launch on Melrose Avenue in Los Angeles in the fall and a 4,000-square-foot space that will open next winter in Chelsea.

Rosenquist Estate to Kasmin
The Estate of James Rosenquist, a pioneer of Pop Art who lived in East Hampton from 1964 until the mid-'70s, is now represented by the Kasmin Gallery in New York City. After having worked as a billboard painter, Rosenquist developed a painterly language that juxtaposed fragmented images, often on a large scale. He is best known for “F-111,” an 86-foot-long work that took the fighter plane as its subject but interspersed its parts with images of a child under a hair dryer, lightbulbs, and spaghetti, among others.

Kasmin plans to present a major solo exhibition of Rosenquist’s work in 2022.

Honor for Virtual Studio Tour
MediaCombo, a Brooklyn-based company that designs immersive interactive digital experiences, won a Telly Award for “Tracing Paint,” the Pollock-Krasner House and Study Center’s virtual studio tour. The VR experience enables visitors to experience the studio as it was when the artists worked there, to see their paintings where they created them, and to hear them talk about their methods and motivations.

Telly Awards showcase the best work created within television and across video, for all screens. Winners are chosen from over 12,000 entries submitted each year from around the world.