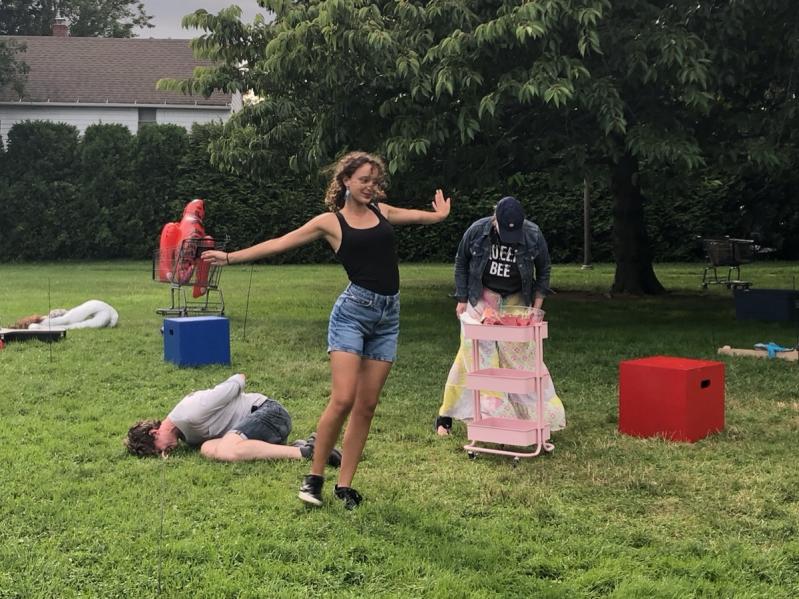 "The Complete Works of Shakespeare, Abridged" takes an irreverent and accelerated look at the 39 plays of William Shakespeare."
Zoe Lubetkin
By Zoe Lubetkin

Arise, fair audience, and kill the envious ennui: Kate Mueth and the Neo-Political Cowgirls will perform "The Complete Works of William Shakespeare, Abridged" starting Thursday at Herrick Park downtown. Bring a blanket or low-slung chair and catch a show -- they run Thursdays through Sundays at 7 p.m. until July 25.

Marking a return to public theater for the Village of East Hampton, Ms. Mueth, the director, sees the play as "exceptionally needed community-building, bringing life and vibrancy back to our village in a way that is inclusive and accessible."

Starring LaWanda Hopkins, Trevor Vaughn, and John Kroft, the play challenges the three-actor cast with tackling the Bard's 37 plays in 90 minutes. The less-than-reverent result is "really joyful, simple in its ridiculousness and fun," and appropriate for everyone, Ms. Mueth said.

It is her third time directing the play but the first for this company; in fact, it is the first time the company has produced and directed an already-scripted work. The Neo-Political Cowgirls, a theater company founded here by Ms. Mueth 14 years ago, works primarily in alternative performance spaces and outdoors, and the works typically feature music and dance.

The play is presented in partnership with the village and the East Hampton Chamber of Commerce. In January, the company met with Marcos Baladron, the village administrator, because the village wanted to organize events in Herrick Park and was "excited about the possibility" of bringing Shakespeare here, Ms. Mueth said. The new administration has put community art initiatives on the radar, and bringing theater outdoors and into public spaces "takes a lot of people saying yes to creativity and yes to community-building," she said.

Because of the isolation brought on by the pandemic, public theater and "experiencing a story together" are more crucial than ever, Ms. Mueth said. "It's part of a great diet in terms of what we feed our minds and our experiences."

In theater and in bringing people together, "timing is everything," she said. "It's been a long time coming."

Tickets are free but require a $5 reservation fee, which will be returned to each person in cash when they arrive at the park.

Front-row V.I.P. pods are available for $150. They include attendance for up to four people and swag bags with gifts from local shops. Ticket reservations are available at npcowgirls.org and are capped at 100 people per night.