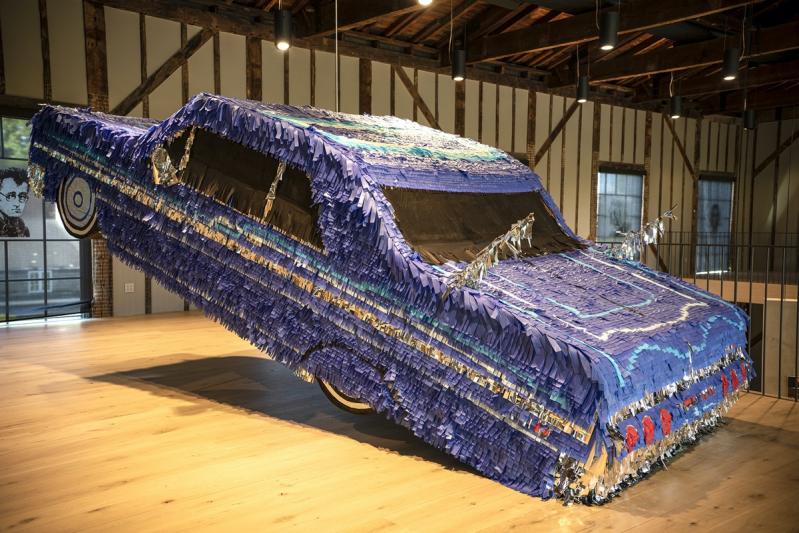 Justin Favela's "Blue Lowrider," a 1964 Chevrolet Impala made into a pinata, will be on view at The Church in Sag Harbor in its "Road Rage" exhibition.
By Mark Segal

A Car Crush
“Road Rage,” an exhibition of artworks that use the automobile as inspiration and material, will open Friday at The Church in Sag Harbor, with a reception from 4 to 7 p.m. It will be on view through Sept. 20. Organized by Sara Cochran, The Church’s executive director and chief curator, and Eric Fischl, its co-founder, the show features paintings, photographs, sculpture, and animated film by 25 artists, ranging from the 1960s to the present.

Fireplace Project Is Back
The Fireplace Project in Springs is opening its summer season with “Mrs. Robinson,” a group exhibition organized by Edsel Williams that will run from Friday through July 18. The show features current and recent M.F.A. students from Columbia University School of the Arts, Hunter College, and N.Y.U. Steinhardt. A reception will be held on Saturday from 6 to 8 p.m.

“Works on Cardboard,” a solo show of works by Frederic Tuten, and “Within and Without,” which features work by Mr. Fernandez, will also be on view. All three will run through July 21.

Christie’s Out East
Christie’s auction house has opened a pop-up gallery at One Pond Lane in Southampton that will present exhibitions of 20th and 21st-century art and luxury goods, client events, and educational programming.

“Out East,” the inaugural show, features work by some of the South Fork’s best-known artists, among them Willem de Kooning, Helen Frankenthaler, Lee Krasner, Fairfield Porter, Roy Lichtenstein, Andy Warhol, and Eric Fischl. The exhibition is open by appointment through July 11. Appointments can be made by emailing [email protected] or by calling 212-636-2600.

Hassinger at Dia
A site-specific installation by Maren Hassinger will open at Dia Bridgehampton Friday. The artist, who lived in Springs and taught at Stony Brook Southampton in the 1990s, explores connections among ecology, humanity, and identity.

Ms. Hassinger has often used repurposed industrial steel cable that she unravels and twists to create upright bush-like shapes with a human scale. The wire sculptures, which evoke the tensions of nature, have been central to her practice since the 1970s and provide the foundation for the installation at Dia, which includes hanging fabric panels on the first floor and a new bush sculpture on the back lawn.

The show will remain on view through May 2022.

A Summer Salon
Selavy by Di Donna in Southampton will open “Black/White/In Between,” its summer salon exhibition, next Thursday with an installation of important artworks across the years and mediums juxtaposed with modern design items, all using a monochromatic palette punctuated by jolts of color.

White in Retro
A retrospective of paintings by Nelson H. White will open at the Grenning Gallery in Sag Harbor with a reception on Saturday evening from 6:30 to 8 and remain on view through July 7.

Mr. White’s primary subject is nature. He often paints en plein air in a single sitting, layering wet paint on previous layers of wet paint, sometimes using a palette knife to build up the surface. According to the gallery, this exhibition, which includes paintings made in Connecticut, Southampton, and on Shelter Island, reflects a shift in his recent work toward abstraction, through a focus on pure color.

Meckseper’s Shorts
Guild Hall and the Elaine de Kooning House are presenting “Moments Choisis,” a series of new digital short films by Josephine Meckseper that will be made available for viewing on Guild Hall’s website starting Tuesday at noon.

Currently in residence at the de Kooning house, Ms. Meckseper is producing and editing three-to-five-minute clips that feature the studio’s architecture with layered shots of her works in progress and the surrounding landscape.

Subsequent installments will become available on the website at noon on June 29, July 6, and July 13, and all four will remain available for viewing online.

Two Shows at Markel
Kathryn Markel Fine Arts in Bridgehampton is opening two exhibitions today. A two-artist show of paintings by Stanley Bielen and Sara Macculloch is on view in the downstairs gallery, while "Down to Earth,” organized by Julia Halsey, a guest curator, has been installed in the upstairs space.

Mr. Bielen’s seven small paintings reflect his interest in objects of daily life, such as flowers, pots, and fruit, while the local landscape inspires Ms. Macculloch.

“Down to Earth” features work by Amanda Blacknik, Rebecca Poarch, Valerie Ferrugia, Brigit O’Hara, and Francesca Pagan. A reception will take place Friday from 5 to 7 p.m. and the shows will run through July 12.

Outdoor Sculpture
“Uncommon Ground IV,” an exhibition of outdoor sculpture by 14 artists working in a variety of materials, will open Saturday at Bridge Gardens in Bridgehampton.

Organized by Cheryl Sokolow of C Fine Art and produced in partnership with the Peconic Land Trust, the exhibition has been designed to let the dynamic of the garden provide the “ ‘ground’ from which the sculptures are seemingly born,” according to a release.

Heckscher at 100
“The Heckscher Museum Celebrates 100: Tracing History, Inspiring the Future,” an exhibition commemorating the art, people, and events that have shaped the Huntington museum since its founding in 1920, is on view through Jan. 10, 2022.

Drawn entirely from the museum’s holdings, the exhibition is grouped chronologically by acquisition year and includes some salon-style displays from floor to ceiling. Among the many East End artists collected by the Heckscher over the years are Thomas Moran, William Merritt Chase, Alfonso Ossorio, Audrey Flack, Jack Youngerman, and Roy Lichtenstein, to name a few.