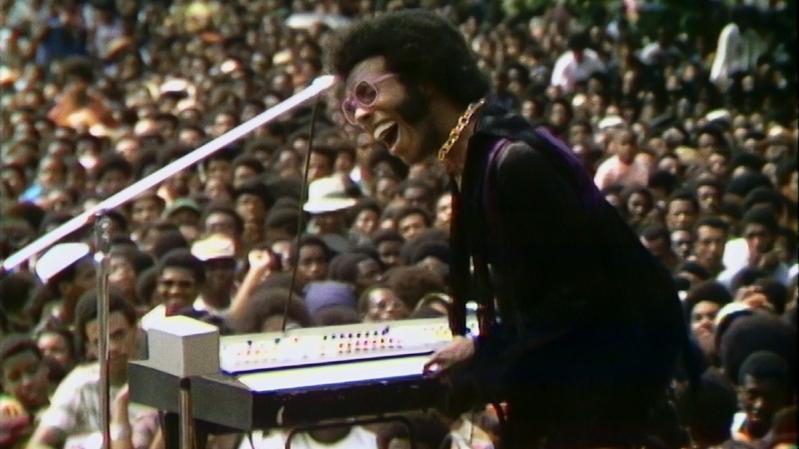 Concert footage of Sly Stone and many other stars of rock and soul is featured in "Summer of Soul," the first film in this year's SummerDocs series.
Mass Distraction Media
By Jennifer Landes

HamptonsFilm's SummerDocs series will return for another season with a set of three feature-length films beginning June 26. A discussion with the filmmakers and guests led by Alec Baldwin and David Nugent, HamptonsFilm's artistic director, will take place after each screening in the theater at Guild Hall.

The first film, at 7 p.m. on the 26th, will be "Summer of Soul (. . . Or, When the Revolution Could Not Be Televised)." Directed by Ahmir Thompson, more commonly known as Questlove, it explores the Harlem Cultural Festival, which took place over six weeks in the summer of 1969, celebrating Black history, culture, and fashion in the park now known as Marcus Garvey Park.

The festival and performances by Stevie Wonder, Nina Simone, Sly & the Family Stone, Gladys Knight & the Pips, Mahalia Jackson, B.B. King, the 5th Dimension, and others was recorded and then largely forgotten. The film provides an opportunity to see this footage for the first time and put it in a greater context as a historical record.

"Summer of Soul" premiered at the 2021 Sundance Film Festival, where it won the Grand Jury Prize and Audience Award. It will stream on Hulu in conjunction with Disney General Entertainment's Onyx Collective. Searchlight Pictures will release it in theaters.

The next screening, on July 24, will be Andreas Koefoed's "The Lost Leonardo," which focuses on the story behind "Salvator Mundi," a controversial painting attributed to Leonardo da Vinci by some but seriously doubted by others. The film traces its path from its acquisition at an auction house in New Orleans to becoming the most expensive painting ever sold at auction, at $450 million. The start time is 8 p.m.

"Lily Topples the World," directed by Jeremy Workman, will be shown on Aug. 21. Its subject, Lily Hevesh, is at the age of 20 the greatest domino toppler in the world and the only woman in the field. The documentary tells a coming-of-age story of a quiet Chinese adoptee in America who becomes a global sensation with 1 billion YouTube views. Made over three years, it features appearances by Jimmy Fallon, Katy Perry, and Will Smith, among others. It will be screened at 7 p.m.

Mr. Nugent said the documentaries "showcase the importance of history, culture, and art -- we are excited for our audiences to experience the magic of these films."

Tickets for the screenings are available at the HamptonsFilm website.

This article has been modified to correct the date of the first screening.