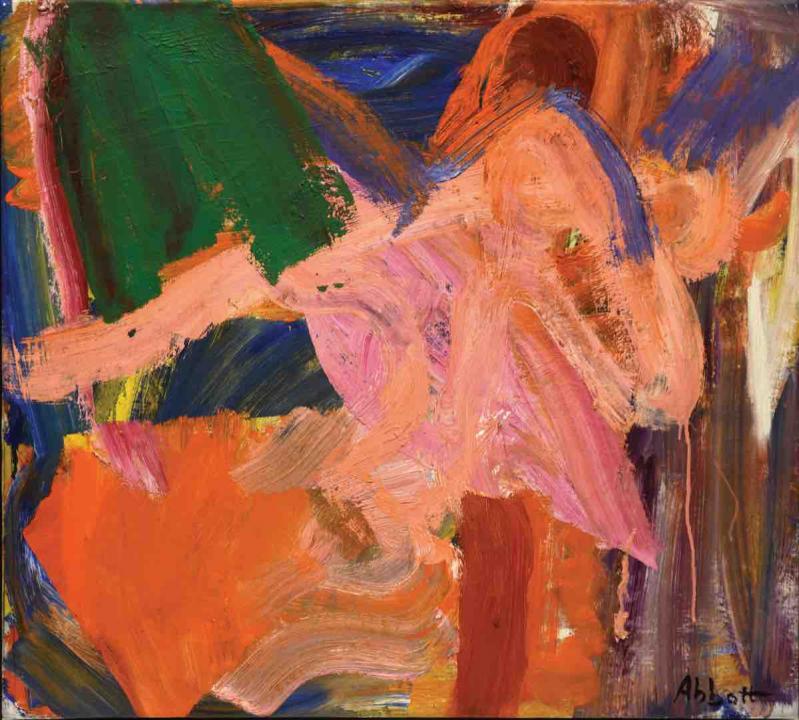 Mary Abbott's "The Living Possibility of Flesh," with strong ties to Willem de Kooning, is one of several of the artist's works on view at Pollock-Krasner House.
By Jennifer Landes

During the past decade or so, it's become trite to reflect on how much the rediscovery of the work of the female and lesser-known Abstract Expressionist painters of the New York School has reinvigorated the appraisal of the genre.

Those who may have previously sniffed that the era had nothing left to show them have likely been provoked into thinking otherwise by the startlingly strong works that have emerged from hiding in recent years by names previously lost to history.

She is also the sole focus of "Mary Abbott: The Living Possibility of Paint," an exhibition featuring her paintings of the 1950s at the Pollock-Krasner House and Study Center in Springs. There she really shines, outdoing herself from canvas to canvas in a decade when she moved back and forth from New York City to the Caribbean and a house in Southampton.

The range of styles and interests on view make it a relief that the show has kept focus on a single decade in her career. In these works, we see a continuous synthesis of observed nature and the subconscious. Objective reality entered the black box of her psyche and emerged on the other side as bold strokes of pigment, applied by knife, brush, and hand.

Sense of place is strong and movement is rolling and lyrical. It's tempting to guess just where she made some of these works, the Caribbean ones ("Mahogany Road" and "Mahogany Road / Water Distant") being the easiest to identify. Just as tempting is to find the influence of artists she studied and worked with in her formative years.

At 17, she was taking courses at the Art Students League with George Grosz and Anne Goldthwaite before she was even out of the Chapin School, from which she graduated in 1939.

Debuting at the Colony Club, she became one of the "It Girls" of New York City and soon began modeling as a cover girl for magazines and advertising. After a marriage to R. Lewis Teague dissolved, she returned to modeling and found an apartment on Spring Street and a studio on 10th Street. She began meeting the artists who settled in New York City before and after the war, such as Barnett Newman, Mark Rothko, Robert Motherwell, Grace Hartigan, Lee Krasner, and Elaine and Willem de Kooning.

Although she studied at the Subjects of the Artist School with Newman and Rothko, de Kooning would have the most profound and visible impact on her work. Her sensuous approach to gesture, allusions to flesh and other natural elements in her work, and application of paint all correspond well with his work.

In a catalog essay for the show, Phyllis Braff notes that "Like de Kooning, she regarded the artist's role in translating the concept of real space to a flat surface as the major challenge for modern painters."

Living and working downtown also gave her entry into the regular presentations and discussions at the Club, an artists' gathering spot in a loft on Eighth Street between University Place and Broadway. She was one of the few women members in the group. She also shared the same Manhattan galleries: Tanager, Kootz, Stable, and Tibor de Nagy.

Although each work in the show is striking in its own way, "Black Boat Bowed Greek (Poetry Painting)" has an avant-garde feeling that anticipates Cy Twombly in its use of line and language. Abbott met the poet Barbara Guest at Fairfield Porter's house in Southampton and the two collaborated on several works in which the poet would recite a line and the painter would interpret it on a canvas.

The writing in the painting seems unexpected and radical in this setting, but artists and poets such as Larry Rivers and Frank O'Hara were also collaborating in similar ways around the same time. Still, Abbott brings her deft and confident hand to the task, making the genre her own.

The exhibition is on view through July 25.