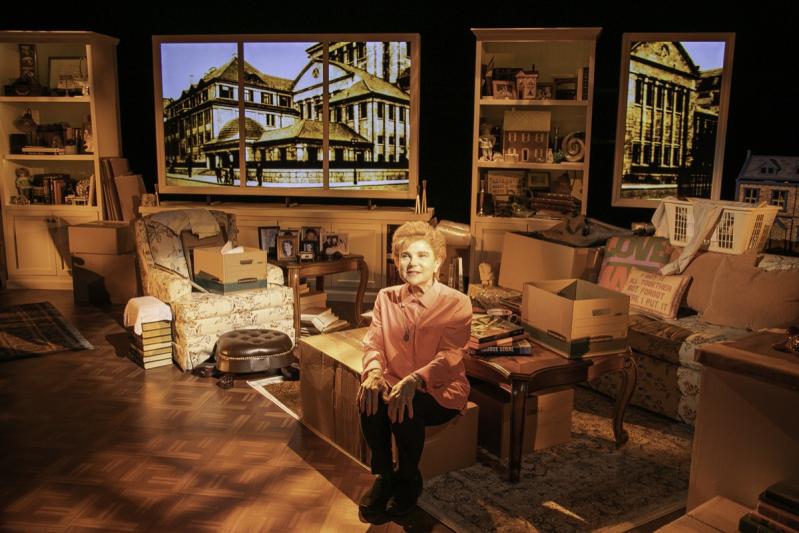 In her heyday -- the 1980s and early '90s -- Dr. Ruth Westheimer became the most unlikely of celebrities. A tiny pixie of a woman with an unguarded German accent, she gave sexual advice on radio, talk shows, and in countless books, and ended up an international sensation.

It was not just that she gave sane and unflinching sexual tips, but she was also infectiously likable. She radiated a can-do positivity and was quick to laugh, often at herself. She became talk-show gold, and a one-woman industry.

If millions enjoyed her personality as much as her work, few of them (myself included) knew the woman behind the public facade. She was, it turns out, a person of extraordinary character, and one who has overcome a tragic past. Her life story has the kind of dramatic arc that excites Hollywood producers.

It is this extraordinary back story that is explored in the play "Becoming Dr. Ruth," currently showing at Bay Street Theater in Sag Harbor.

This is a one-woman show, and a tour de force for Tovah Feldshuh. Portraying a personality as distinctive as Dr. Ruth can be treacherous for an actress; a lazy performance could easily fall into mimicry. And while Ms. Feldshuh has the voice and the mannerisms of her subject down cold, she also inhabits Dr. Ruth as a living, breathing person.

The play begins as Ruth is cleaning out her New York apartment of over three decades; her husband has died and she wants a new start. As she tucks her things into boxes, certain items jog her memory, and she begins to tell her story.

For Jewish Europeans of the first half of the last century, it is a familiar one. Ruth grew up on the Brahmsstrasse in Frankfurt in the early 1930s. "All the streets are named after composers!" she says happily. Her father, she tells us, was a prosperous merchant, and his marriage to Ruth's mother seemed a happy one. Born unusually small of size, Ruth was given fish oil to eat to help her grow, but nothing worked, though along the way size would be just another obstacle she would overcome.

The set has an ingenious stage design where the windows of Ruth's apartment also project photographs and images from her past. We see pictures of her family members, along with old boyfriends and husbands, but also images of Kristallnacht, or the night of broken glass -- the brutal European pogrom Ruth's family endured when she was a young child. She tells the audience of walking through the streets of Frankfurt after the attacks and seeing their family's synagogue in flames, and her father's shop destroyed and defamed with swastikas.

Ms. Feldshuh is masterful at manifesting the emotions of Ruth without sentimentality -- after all, Ruth tells the audience, she was taught as a child that "Jews don't cry." But through a series of long, halting pauses -- most notably with Ruth's remembrance of her father smiling up at her from the street as he is being taken away in a truck by the Nazis -- she conveys the full breadth of the emotion.

You can see why the subject matter drew the attention of Mark St. Germain, the playwright. Ruth's life serves as almost a metaphor for the Jewish experience -- a seemingly endless series of heartbreaks and impossible obstacles over which she ultimately triumphs. "I fall down, I get back up!" she says.

She was down a lot in her early life. Ruth escaped the Holocaust by being accepted at a Swiss boarding school, only to be used there as free labor for the indigenous Swiss Jews. Making her way to Palestine in the late 1940s, she enlisted in the Jewish Army as a sniper (and apparently was a crack shot!) and had half of her foot blown off by a bomb. Her first two marriages failed.

When she finally makes it to New York, she finds she is either too Jewish, or -- as one of her Zionist professors at the New School decides -- not Jewish enough. Ultimately, she comes to accept that her parents have died in the Holocaust.

But she persists. She gets her doctorate in education, veering into sex ed almost by accident, and by sheer pluck and energy ends up doing a late-night radio show. (There is another well-executed set piece as Ruth re-enacts her talk show from her living room desk.) Starting at 15 minutes, her radio show was soon expanded to an hour. The rest is history.

As directed by Scott Schwartz, "Becoming Dr. Ruth" is a crisp but emotional 90 minutes. And Ms. Feldshuh's performance is one the best at Bay Street in recent years. There was even an unfortunate "cellphone moment" toward the end of the play, when Ms. Feldshuh paused, shot daggers at the audience member, and seamlessly leaped right back into character in the next moment.

Like her fictional counterpart, nothing, it was clear, could derail Ms. Feldshuh from her triumph.