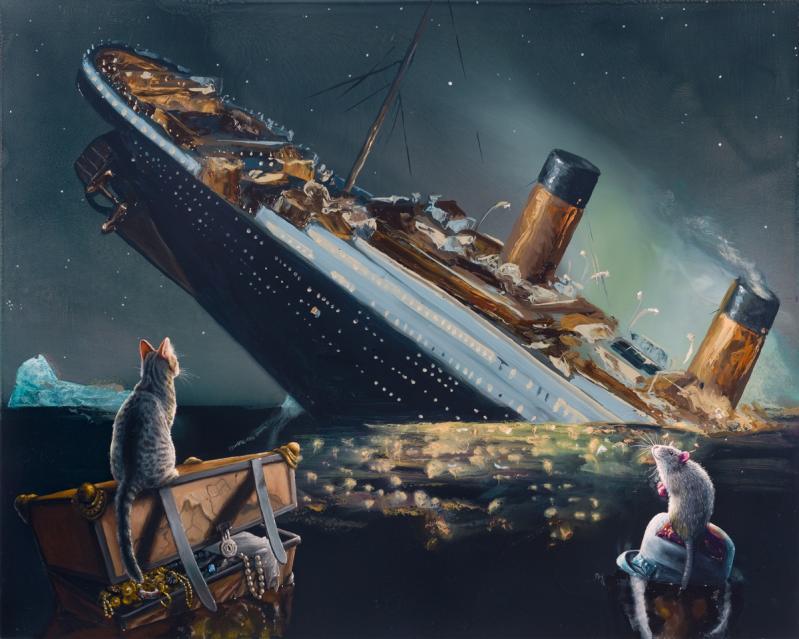 Animal survivors watch from atop lost cargo as the great ship goes down in “Titanic” (1919) from Alexis Rockman’s “Shipwrecks” series.
Adam Riech
By Mark Segal

Alexis Rockman’s paintings and drawings have ranged from realistic field drawings of flora and fauna from around the globe to large-scale, detailed paintings of a dystopic future in which nature and its inhabitants have been ruined by environmental recklessness.

“Alexis Rockman: Shipwrecks” will open at Guild Hall on Saturday. In the show's 40 paintings and watercolors, the artist turns his attention to the world’s waterways as a network by which all of history has traveled. Language, culture, art, architecture, cuisine, religion, disease, and warfare all followed the routes of seafaring vessels, going back to, and sometimes pre-dating, the earliest recorded civilizations.

Mr. Rockman depicts not only historical and imaginary shipwrecks, but also lost cargo such as bottles, life preservers, framed paintings, barrels, animals, and many other items floating or resting on the sea bottom. The vessels range from the familiar -- the Titanic, the Lusitania -- to the more historical and obscure, including the Luxborough Galley from 1727, a lifeboat from the HMS Terror, which disappeared in 1845; Chinese junks, Mississippi riverboats, and the raft of the Medusa.

“Through the lens of the shipwreck, Alexis Rockman examines the complexity of the human psyche, the rearrangement of material culture and economies, and the exploitation of life, with its intended and unintended consequences,” said Andrea Grover, Guild Hall’s executive director, who organized the exhibition. “His paintings awaken imagination to the colossal impact of the Anthropocene, and with any luck inspire better stewardship of the planet.”

“Shipwrecks” addresses the impact on the planet of the migration of material culture, people, plants, and animals, as well as globalization and the exploitation of humans, animals, and natural resources. In addition to traditional Eurocentric maritime images associated with the Age of Exploration, the paintings also depict non-Western waterborne vessels and journeys from other periods and global regions.

Alexis Rockman was exposed to natural history at an early age through his mother, who worked at the Museum of Natural History. His interest in film and animation led him to study at the Rhode Island School of Design, and to the School of Visual Arts in Manhattan. He was selected by the filmmaker Ang Lee to create conceptual sketches and design a sequence for the Academy Award-winning 2012 film “Life of Pi,” and his work is in the collections of important museums worldwide.

The exhibition, which will run through July 16, will be accompanied by “Alexis Rockman: Shipwrecks,” a catalog with essays by Sasha Archibald, Chanda Laine Carey, and Brett Littman, edited by Ms. Grover.

“Art and Cinema,” a conversation between Mr. Rockman and Carter Burwell, the Oscar-nominated composer of dozens of film scores, including 16 collaborations with Joel and Ethan Coen, will take place on Saturday at 7 p.m. in Guild Hall’s Minikes Garden. Ms. Grover will moderate the free discussion.

“Life of Pi” will be shown in the backyard theater Saturday at 8:30 p.m. The film tells the story of a young man who survives a disaster at sea to embark on an adventure during which he forms a bond with another survivor, a Bengal tiger. “Life of Pi” won Academy Awards for best director, best cinematography, best visual effects, and best original score. Tickets are $15.

Guild Hall After Hours, a series that features live performance, food, music, and interactive events, will respond on Saturday to “Shipwrecks” with a live sound installation by Cliff Baldwin and a participatory installation with Aurelio Torres. The free programs will take place at 6 and 7 p.m. in the backyard theater.

Registration for all programs is via Guild Hall’s website.