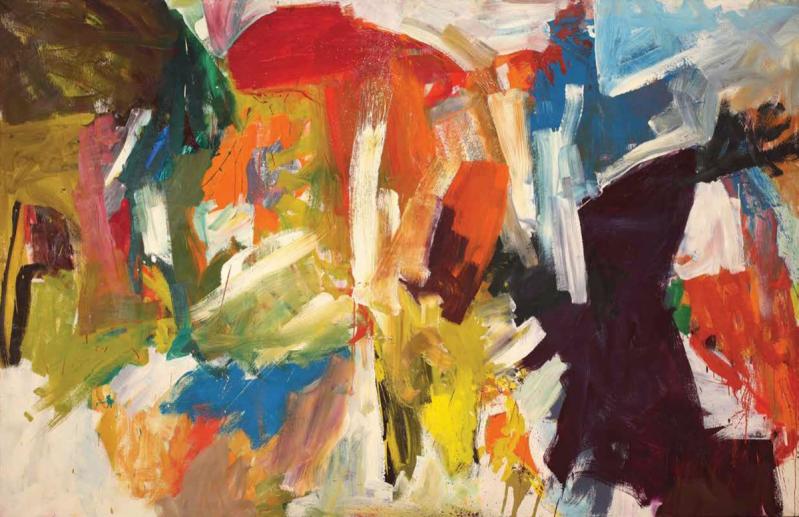 "Yaphank" from 1964 is one of a group of paintings included in "John Little: Home Again" at the Arts Center at Duck Creek.
By Jennifer Landes

Perhaps it was inevitable that John Little, the former resident of Duck Creek Farm, would return one day -- at least through his paintings -- to the arts center that has developed on the site where he once lived and worked, which was bought and preserved by East Hampton Town in 2006. At least many of us hoped so.

Residents and visitors to the area will have a chance to recall or acquaint themselves with his work when the exhibition "John Little: Home Again" opens at the center on Saturday. The micro survey of paintings dates from 1948, the year Little purchased the farm.

It's tempting to imagine his reaction to the peaceful yet active spot that the Arts Center at Duck Creek has become. With beautifully installed exhibitions that make the most of the rustic barn walls, a popular jazz concert series, and lectures and other special events, Duck Creek is now a Springs destination, one that complements its neighbor to the east, the Pollock-Krasner House and Study Center.

While Little's fame and fortune never came close to the success of his friends Lee Krasner and Jackson Pollock, he was always a respected artist among his peers and was introduced to East Hampton by the couple as a houseguest. It was Krasner who first showed Little the farm, hoping he would consider moving there.

The show was organized by the McCormick Gallery in Chicago and Vallarino Fine Art in New York, which represent the Little estate. In an essay by Thomas McCormick for the exhibition catalog, he notes that back then it was a "rundown old house with about seven acres on Squaw Road . . . but something must have clicked because Little bought it and immediately set to restoring it."

He added a barn from the David Johnson Gardiner farm on James Lane in East Hampton, which became his studio and now the exhibition and performance space for Duck Creek. "Black-and-white photos taken by Jackson Pollock in 1948 record the barn raising," Mr. McCormick writes.

Little, who died in 1984, worked in New York and Provincetown, Mass., with Hans Hofmann in the late 1930s. Hofmann encouraged his development as an abstract artist. He first showed his work in 1946 in San Francisco at the California Palace of the Legion of Honor, with a New York show at Betty Parsons's gallery in 1948.

After moving to Springs, he maintained a close friendship with Pollock, and they had a joint exhibition in 1955 at Guild Hall, which held a retrospective of his work in 1982.

In the Little Gallery is a show of three artists, "Sunsets on Mars are Blue." It features paintings by Kylie Manning, Jay Miriam and Grace Metzler, in styles somewhere between figuration and abstraction.

The exhibitions will remain on view through July 18. The gallery hours are Thursday through Sunday from 2 to 6 p.m. and by appointment.