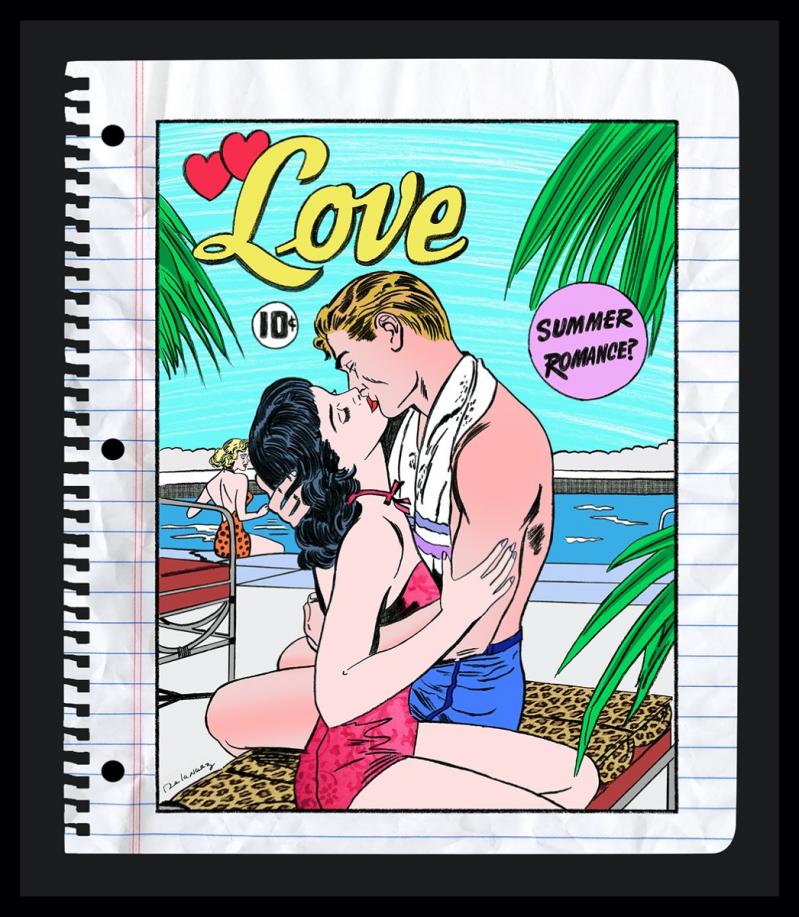 Nelson De La Nuez’s mixed-media work “Summer in the Hamptons” is on view at the White Room Gallery in Bridgehampton.
By Mark Segal

The exhibition will include 50 works by 29 artists in a wide range of mediums, with a balance between representational and abstract pieces. All were created before the beginning of the pandemic.

Shimon Attie, a visiting professor of studio art at Stony Brook University, conceived the show in conjunction with the Pollock-Krasner House. Artists were chosen in consultation with Norman L. Kleeblatt, a former curator at the Jewish Museum in Manhattan, and with curatorial assistance from Talya Feldman.

A Zoom panel discussion will take place Sunday at 3 p.m. with Mr. Attie, Mr. Kleeblatt, Jeanne Wolff-Bernstein, a psychoanalyst with a practice in Vienna, and Catalina Nestor, a Romanian artist whose work is included in the exhibition.

Michelle Stuart in Parrish Talk
Michelle Stuart, whose work is on view at the Parrish Art Museum in the exhibition "Affinities for Abstraction: Women Artists on Eastern Long Island, 1950-2020," will discuss her approach to nature and abstraction with Alicia Longwell, the museum's chief curator, tomorrow at 6 p.m. The conversation will take place in person in the museum's theater and be livestreamed. Advance ticket purchase and pre-registration are required.

“Surf Poems”
Grain Surfboards in Amagansett will open its gallery for the season on Wednesday with “Surf Poems,” an exhibition of 24 recent ink drawings by Manny Aloha, whose drawings, paintings, and poems are fueled by a life immersed in surfing. He often writes and draws immediately after surfing in order to capture the exhilaration of riding the waves.

The artist, a serious skateboarder as well as surfer, lived in Brooklyn from 1999 to 2005 and was part of the Barnstormers, a collective that included prominent graffiti artists. The show will run through July 6.

Here Comes Summer
“Edge of Summer,” an exhibition of work by 22 artists organized by Coco Myers of Folioeast, is on view at Ashawagh Hall in Springs today through Sunday from noon to 5 daily. A reception will be held tomorrow from 5:30 to 7:30 p.m.

Snoeman at N.53
“New York Love,” an exhibition of new works by Snoeman, a New York-based artist, is on view through June 28 at N.53 Gallery in East Hampton. Snoeman works in a wide range of mediums, with a focus on aerosol murals and mixed-media paintings. A street-art veteran, he is known, according to the gallery, for his gritty aesthetic and raw depictions of quintessential New York people, places, and things.

Poolside Reveries
“Oh, Pool Boy!” -- an exhibition whose title summons up images of 1940s movie stars brandishing empty martini glasses while lounging poolside -- is on view at the White Room Gallery in Bridgehampton through July 12, with a reception set for Saturday from 5 to 7 p.m.

Nature and Creativity
In conjunction with its current exhibition “Earth: Artists as Activists,” the Southampton Arts Center, in partnership with the Peconic Land Trust, will present “The Artist’s View: Contrasting Expressions of Nature,” a virtual panel discussion, on Wednesday at 6 p.m.

At Harper’s Chelsea
“Venus Su Misura,” a solo exhibition of work by Ryan Wilde, will open at Harper’s Chelsea today with a reception from 6 to 8 p.m. and remain on view through July 10. The show includes a new series of paintings and soft sculptures of anthropomorphized busts and appendages.

Ms. Wilde’s sculptures seek to provoke a dialogue on the theatricality of gender. The figures are faceless, except for implied features, and the hands are tasseled sex toys or pinwheels and lollipops. According to the gallery, they exist in a world where the expectation to perform as a woman crosses into absurdity and dysfunction.

Group at Kramoris
An exhibition of artwork by Jessica Alazraki, Kelly Nelson, Alan Nevins, and Jorge Silveira is opening today at the Romany Kramoris Gallery in Sag Harbor and will run through July 1. A reception will be held Saturday from 5 to 6:30 p.m.

Born in Mexico City, Ms. Alazraki is known for expressive portraits, both of Latinx life and culture, and dogs. People and animals, some with mythological overtones, figure prominently in Ms. Nelson's paintings.

De Kooning and Soutine
“Soutine/de Kooning: Conversations in Paint,” an exhibition organized by the Barnes Foundation in Philadelphia and the Musees d’Orsay et de l’Orangerie in Paris, is on view in the Roberts Gallery at the Barnes through Aug. 8.

The show examines how Soutine’s paintings, with their built-up surfaces and vigorous brushwork, helped shape de Kooning’s groundbreaking figurative-abstract works in the late 1940s and beyond.

Crush Now Hesse Flatow
Hesse Flatow East in Amagansett, formerly Crush Curatorial, will open for the season today at 68A Schellinger Road with a four-day group exhibition for the benefit of Dieu Donne, a nonprofit that fosters collaborative creation of contemporary art using the process of hand papermaking.
A reception will be held tomorrow from 4 to 7 p.m. On other days, timed appointments between 11 a.m. and 5:30 p.m. can be made at https://app.acuityscheduling.com/schedule.php?owner=19406212.

This article has been modified from the print version to include Michelle Stuart's talk at the Parrish Art Musuem, which was announced after press time.