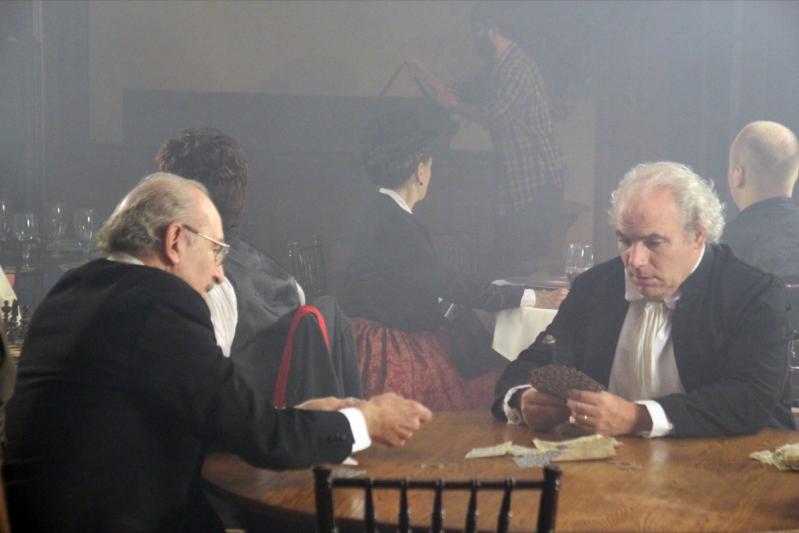 It wasn’t until the spring of his senior year in high school that Allen O’Reilly first performed onstage. Until then, his ambition was to be an athlete, and he was more likely to be found on a football field than in a theater. In fact, during his last year at the Peddie School in Hightstown, N.J., he made the all-state prep team and won a scholarship to play football at Ripon College in Wisconsin.

Enter Ken Kesey. Peddie was producing “One Flew Over the Cuckoo’s Nest” as its spring play. “I thought I’d try out for it,” said Mr. O’Reilly, “because even though I was a jock at the time, people always said, ‘You’re funny, you ought to be on the stage.’ ”

He auditioned and was cast as Ruckley, the vegetative victim of a botched lobotomy. “This particular character is in the crucifix position throughout the play, and in the movie as well. I added jerks and spasms, I had spittle coming out of my mouth, I really went for it. And on opening night I heard a man in the audience say, ‘This guy’s trying to go for the Academy Award.’ So I got the bug.”

More than four decades as an actor and education director followed, including, most recently, the position of director of education and community outreach at the Bay Street Theater in Sag Harbor.

Throughout that long career, acting gigs have kept pace with Mr. O'Reilly's day jobs, most recently with the release last month of the “The Enormity of Life,” a quirky comedy in which he plays “an obnoxious attorney” who offers a quarter of a million dollars to encourage a suicidal protagonist to hang on to life. “Wicked,” a film adaptation of a romance novel unrelated to the Stephen Schwartz musical, will open on May 27.

Instead of Ripon, Mr. O'Reilly attended Northern Arizona University and became a theater major. During his junior year he was nominated for an Irene Ryan Award at the Kennedy Center American College Theater Festival’s competition in Los Angeles. He didn’t win, but “I’ll never forget that Linda Lavin voted me through to the final round.”

His next stop after college was Actors Lab Arizona, a conservatory environment where he was cast in the title role in “Scapino,” a 1974 play adapted by the actor Jim Dale and the director Frank Dunlop from a play by Moliere. He also played Macbeth, even though still in his 20s, before deciding there were not enough acting opportunities in Phoenix.

Accepted by the Alliance Theater in Atlanta, he packed up a trailer and drove across country. There he was paired in a play with Teresa DeBerry, an intern from Charlotte, N.C. “We had a couple of love scenes together, and that was that.” They have been together for almost 35 years.

In 1987 Mr. O'Reilly joined Georgia Shakespeare, was made an associate artist in 1992, and remained with the company until 2014, when it folded. In addition to Shakespeare, “We did everything, other classics, Chekhov, Arthur Miller, Moliere.” While mostly a character actor -- “that’s what I am” -- he also played leads, including several performances as Mitch in “A Streetcar Named Desire.”

In a career highlight, he played opposite a young actor from Denison University who was there for the summer. The play was “Merchant of Venice.” Mr. O’Reilly was playing Lorenzo, who elopes with Jessica, played by the then 22-year-old Jennifer Garner.

Instead of having them speak “this wonderful verse that Shakespeare wrote," the director, "who hated Shakespeare’s verse, turned it into prose. He said he wanted us to make out in the scene, throw in a little text, but mostly make out. I was 32, and this was before she was famous, but even then she had a je ne sais quoi.”

In 2004, the position of education director opened up at Georgia Shakespeare, and the "character actor" was hired, balancing acting with developing, executing, and marketing the company's educational programming.

That same year he landed one of his favorite roles, that of the famous sportswriter Grantland Rice, in “Bobby Jones: Stroke of Genius,” a biopic about the legendary golfer starring Jim Caviezel and Malcolm McDowell.

“I’ll never forget my first day on the set. I got on the back of the lunch line, behind the extras. I didn’t know the hierarchy of a film set. And Malcolm called out to me, “Allen, Allen, come up here with me and my lovely wife. Get behind me at the front of the line.’ Malcolm was a genuine sweetheart to everyone on the set.”

After Georgia Shakespeare closed, Mr. O'Reilly was hired by the Cleveland Play House as its education programs manager. At the same time, he was offered the role of the father in “Billy Elliot” at a theater in Cleveland and the lead in “Inherit the Wind” at the Oberlin Summer Theater Festival, where his wife had been cast. Eager to do a musical, he picked “Billy Elliot,” and wound up winning an award for his performance.

In stark genre contrast, that same year he played Detective Steve Kitchen in the film “The Assassin’s Code,” a thriller in which “I had the pleasure of being killed by Peter Storare, who is perhaps most famous for putting Steve Buscemi in the chipper in ‘Fargo.’ ”

While he and Ms. DeBerry were happy and working regularly in Cleveland, when the Bay Street job opened he decided to go for it. He made it clear to the theater’s artistic director, Scott Schwartz, and its executive director, Tracy Mitchell, that he was an actor and would continue auditioning for roles, “and they were fine with that.”

One of the education department’s initiatives is Literature Live! a BOCES-approved Arts-in-Education program that features plays from standards-based literature. For last year’s program Mr. O'Reilly chose “Moby-Dick,” but during the pandemic it became clear that live performances would not be an option.

While the theater’s educational programming was getting used to functioning virtually, he adapted “Moby-Dick” into what eventually became a six-person Zoom production, starring Harris Yulin as Ahab and directed by Will Pomerantz, the theater’s associate artistic director. Mr. O’Reilly played Stubb, Elijah, Perth, and Coffin.

“I’m an actor first,” he said, adding that while he would be happy to be on a film set full time, he would not trade anything in his life for what he has been able to do as a private acting coach and educator.

“I’m blessed to have had the opportunity to watch people whom I work with grow, to have a legacy with different theaters but most importantly with different people, and to follow their careers and know I had an impact on them. It sounds a little Pollyanna, but it’s true, and I never would have had that opportunity if I was ‘just an actor.’ ”

Mr. O’Reilly and Ms. DeBerry, who have two grown children, are currently living in Coram. “We’re perfectly positioned to get to Bay Street,” he said, “but also to be close to the city for potential opportunities that might come up there.”