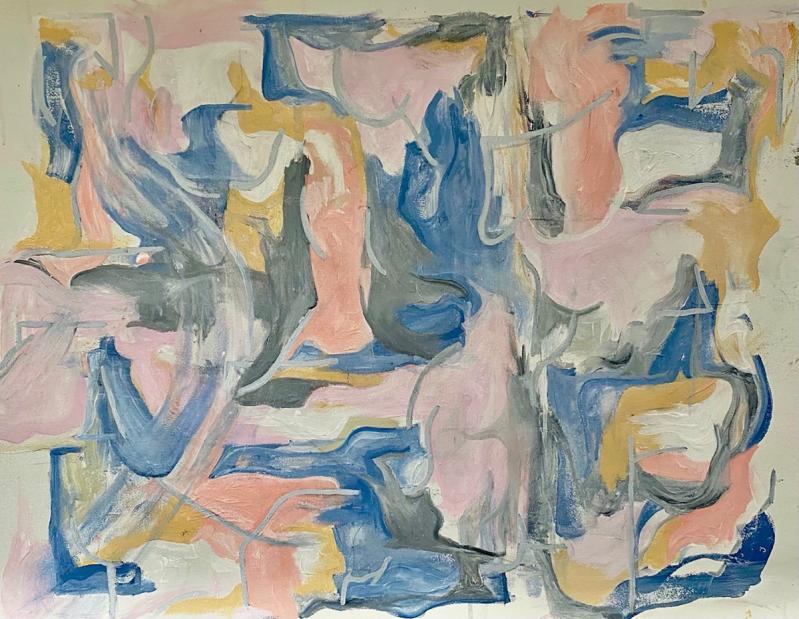 Lucy Villeneuve’s painting “Lyre” is on view at Keyes Gallery.
By Mark Segal

Geiser and Villeneuve
“Mysteries,” a show of work by David Geiser and Lucy Villeneuve, will open at the Keyes Gallery in Sag Harbor on Saturday, with a reception from 4 to 8 p.m., and continue through June 10.

Geiser’s career ranged from the underground comics he created in San Francisco in the 1960s and ‘70s to heavily-textured mixed-media works he made after moving east in 1979. The curator and museum director Peter Selz has written that "David Geiser's work is about transforming matter into spirit."

The exhibition is the first solo show for Ms. Villeneuve, who grew up painting but became more serious about it after taking a college course about Buddhism and the arts. “I work with the elements of Daoism and specifically the Wu Wei, the art of non-doing,” she has said, “and try to focus on the experience of painting rather than the work itself.” She also oversees the summer residency program at the studio of her grandfather, Willem de Kooning.

Abbott's Possibilities
“Mary Abbott: The Living Possibility of Paint,” an exhibition of paintings and works on paper by an Abstract Expressionist artist who died in 2019, is on view at the Pollock-Krasner House and Study Center in Springs through July 25.

Throughout her career she pursued a sensuous approach to abstraction, creating bold, colorful works often inspired by nature or music. The exhibition focuses on Abbott’s paintings of the 1950s, when her gestural canvases “abound with spontaneous expression,” according to the study center.

The artist, a contemporary of Jackson Pollock and Willem de Kooning, had studios in New York City and Southampton.

At Harper’s Chelsea
“Everything Is a Lot of Things,” a show of paintings by Dan Flanagan, is opening today at Harper’s Chelsea, one of the Manhattan outposts of Harper’s Books of East Hampton, and will remain on view through June 5.

The exhibition includes six recent large-scale works on canvas that feature the artist’s experimental approach to gestural mark-making. In addition to acrylic, oil, and spray paint, residual stains, footprints, and handprints testify to the raw act of painting.

According to the gallery, he draws out the connections between “the spontaneity of gestural abstraction and the drive to deface public property.”

Barrada at Pace
An exhibition of new and recent work by Yto Barrada, a Moroccan-French artist known for mining historical figures, sites, and situations for artistic materials, will be on view at the Pace Gallery in East Hampton from Wednesday through May 23.

The exhibition includes recent pieces that reappropriate images from Frank Stella’s “Morocco” series, collages using naturally dyed velvets, photographs of candy wrappers that explore the idea of the void, paper collages that respond to a catastrophic 1960 earthquake in Morocco, and furniture sculptures that use traditional Moroccan wicker-weaving techniques.

Whaling Museum Reopens
The Sag Harbor Whaling and Historical Museum has reopened for the season with “A Pleasure to the Eye,” a show of photographs of Sag Harbor and the East End taken by William Wallace Tooker. A lifelong resident of Sag Harbor, Tooker adopted the camera as a means of documentation in the early 1880s and accumulated 88 images of landscapes and historic buildings by the end of the century.

Brody-Lederman in Sag
The Sara Nightingale Gallery in Sag Harbor is presenting “Behind the Seen,” an exhibition of paintings by Stephanie Brody-Lederman, through May 23. Ms. Brody-Lederman combines simple imagery, such as a small patch of grass, trees, birds, and domestic paraphernalia, with snippets of text that help drive the implied narrative.

The texts, which are non-linear, have roots in the writings of Pinter, Beckett, and Albee as well as the work of such filmmakers as Truffaut and Fellini. Erasures are common on her surfaces, which are meant to evoke peeling walls and the passage of time.

Remembering Vito Sisti
A mechanic with no formal art training, Vito Sisti organized his first art show, “Arts and Auto Parts,” at Ashawagh Hall in Springs in 1991. A few years later he launched a series of shows with work by East End women, and before his death in 2013 he had become a treasured figure in Springs.

Nivola’s Sandscapes
An exhibition of work by Costantino Nivola, a longtime Springs resident, will open Saturday at Magazzino Italian Art in Cold Spring, N.Y., in the Hudson Valley, and remain on view through Jan. 10, 2022.

“Nivola: Sandscapes” explores the artist’s pioneering process of sandcast sculpting with a selection of approximately 50 works from the early 1950s to the 1970s. It includes sandcast reliefs, carved concrete sculptures, and rarely seen maquettes of his most important architectural commissions, reflecting the sculptor's impact on modern urban architecture and design.

De Kooning Drawings
“Willem de Kooning Drawings,” an exhibition of 32 works spanning the artist’s career, will open tomorrow at Matthew Marks in Chelsea and remain on view by appointment through June 26.

The exhibition’s earliest drawings, dating from the 1930s, reflect the tension in de Kooning’s work between abstraction and figuration. They include a 1937 study for his World’s Fair mural, his 1938 portrait of the critic Harold Rosenberg, and “Reclining Nude (Juliet Browner),” also circa 1938.