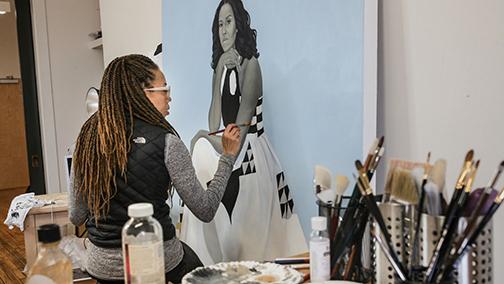 In a scene from "Black Art: In the Absence of Light," Amy Sherald worked on her official portrait of Michelle Obama commissioned by the National Portrait Gallery.
HBO
By Mark Segal

Black Art on Film
The Parrish Art Museum in Water Mill, in partnership with Hamptons Doc Fest, will screen "Black Art: In the Absence of Light" Friday at 6 p.m. and again at 8:15. Directed by Sam Pollard, the film focuses on both the landmark 1976 exhibition "Two Centuries of Black American Art" and the work of many important Black artists today.

"Black Art" includes extensive interviews with David Driskell, who organized the 1976 exhibition, as well as other artists and scholars who discuss the importance of that show. Among the contemporary Black artists featured are Kerry James Marshall, Carrie Mae Weems, Kehinde Wiley, Amy Sherald, and Theaster Gates, whose "Monument in Waiting" is on view in the museum's outdoor sculpture installation.

Tickets are $20, $10 for members, and preregistration on the museum's website is required.

New at Mark Borghi
"Reconstructed," an exhibition of mixed-media works by Gregory Coates, is on view at the Mark Borghi Gallery in Sag Harbor through April 30. Mr. Coates explores the possibility and nature of unconventional materials by combining such objects as steel plates, cardboard, rubber hoses, duct tape, twine, feathers, and paint.

In "Reconstructed," he attaches feathers to discs of lauan plywood, using a combination of oil and acrylic paint to bind the feathers to the wood and call attention to their new texture as a rigid, impenetrable surface.

Three in Manhattan
Keyes Gallery NYC, the Manhattan branch of Keyes Gallery in Sag Harbor, is showing the three-artist "Ides of Spring" through May 9. John MacWhinnie is best known for his portraits of notable artists and writers. Bill Claps's "Natural Abstractions" use photographs of New York as source material. Native American history and mythology inform the photographs of Jeremy Dennis, a member of the Shinnecock Nation.

"Butterfly Dream," a show of paintings by Ho Jae Kim, will open Thursday at Harper's Apartment, the Upper East Side outpost of Harper's Books, and continue through May 8. The figures in Mr. Kim's paintings evoke varieties of existence in a Kafkaesque society.

"Galoot," a film and art exhibition of work by Devon Leaver, a Montauk native, is on view at the Baxter Street Gallery through April 28. The show, which centers on Ms. Leaver's childhood experiences with autism spectrum disorder, attempts to provide a more profound understanding of neurodiversity.

John Torreano at Keyes
"Distant Objects and Dark Matters," a solo show of work by John Torreano, will open at the Keyes Gallery in Sag Harbor on Saturday with a reception from 4 to 8 p.m. and remain on view through May 9.

Mr. Torreano is best known for using faceted gemstones to create the impression of movement in his works. He has used jewels as a metaphor for vigil lights and, in recent years, to make space-like constellations. Of the current exhibition, he said, "Oxymoronic themes thread throughout this installation with black plywood diamonds, a gold black hole, and a painting about dark matter and the paradox of the infinite and finite."

A Reminder From PSEG About Digging
Petition to Speed Up Sand Replenishment in Montauk
Artistic Portraits of M.L.K. Up for Auction on Saturday
END_OF_DOCUMENT_TOKEN_TO_BE_REPLACED