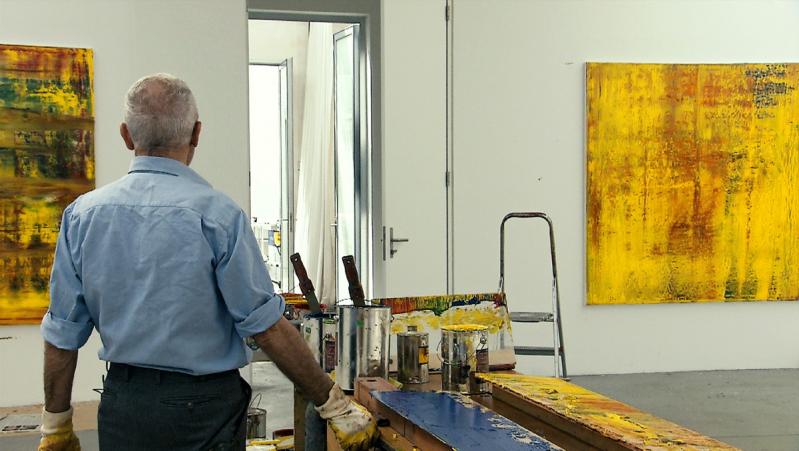 Gerhard Richter in his studio
Kino Lorber
By Mark Segal

Considered one of the world’s most important living painters, Mr. Richter has spent more than 50 years experimenting with a range of techniques and ideas. The film follows the artist as he works on a series of recent abstract paintings, brushing big swaths of paint onto the canvas and then dragging a squeegee, loaded with a single pigment, across.

The New York Times critic Rachel Saltz called him “his own kind of action painter” and added that “Mr. Richter remains an excellent subject, serious and purposeful but also unexpectedly good-natured.”

Preregistration for the in-person screening is required. Tickets are $15, $5 for members, and free for students.

Jeremy Dennis’s “On This Site”
The East Hampton Library’s Long Island Collection will host a livestreamed discussion Monday evening with the artist Jeremy Dennis, a member of the Shinnecock Nation, about his “On This Site” project.

The purpose of “On This Site,” an art-based photography project, is to preserve and create awareness of culturally significant, sacred, and historical Native American locations on Long Island. Through curiosity about his own origin and ancestral history, Mr. Dennis gathers and combines archaeological, anthropological, historical, and oral stories to answer essential culturally defining questions.

Mr. Dennis will also share artwork from his portfolio as it relates to Shinnecock history. A link to the talk, to begin at 6:30 p.m. via Zoom, can be found on the library’s website.

New at Harper’s Chelsea
“The whole time, the sun,” a solo show of paintings by Joani Tremblay, an artist based in both Montreal and Brooklyn, will open today at Harper’s Chelsea, one of the Manhattan outposts of Harper’s Books in East Hampton, and remain on view through May 1.

Ms. Tremblay’s landscapes and skyscapes are based not on observation but rather constructed from a variety of sources, including advertisements, postcards, social media, mass communication, and field research. Idyllic, often sun-soaked views are framed by fragments of domestic environments such as windows, thresholds, and plants. They are imbued with the “spirit and tenor of the American modernists of the Southwest,” according to the gallery.

Tour With Paton Miller
Paton Miller, a prolific Southampton artist, has found time during the past six years to organize large-scale exhibitions of work by East End artists, at the Southampton Arts Center. Mr. Miller will lead the final in-person tour of “East End Collected 6,” a show that features 38 artists, on Saturday at 12:30 p.m.

The free tour is limited to 20 people. Registration, on the center’s website, is on a first-come-first-served basis.

A Reminder From PSEG About Digging
Petition to Speed Up Sand Replenishment in Montauk
Artistic Portraits of M.L.K. Up for Auction on Saturday
END_OF_DOCUMENT_TOKEN_TO_BE_REPLACED