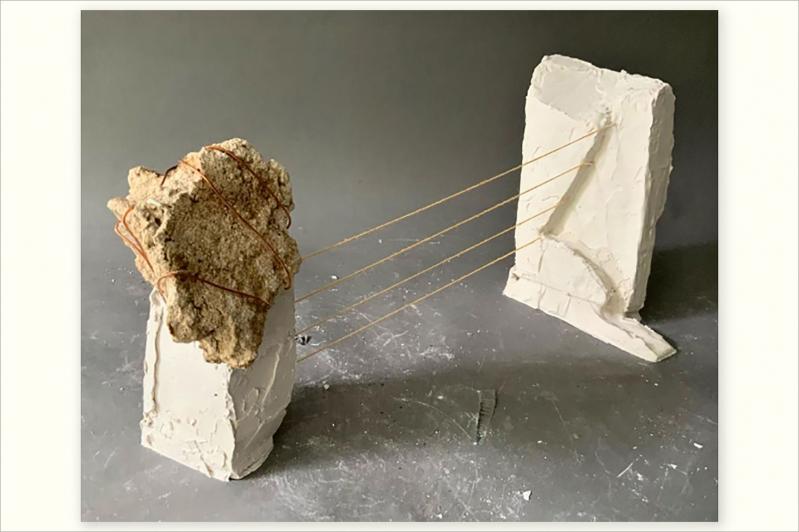 Mark Webber’s sculpture, such as this one combining Hydrocal, stone, copper wire, and string, is on view in New York at Anita Rogers Gallery
By Mark Segal

Focus on Creativity and Collecting
Parrish Pairings, a series of three livestreamed conversations between artists, collectors, and Kelly Taxter, the Parrish Art Museum’s new director, will kick off Sunday at 5 p.m. when Clifford Ross, a multimedia artist known for his intensive experimentation in photography and video, will chat with Beth Rudin DeWoody, an influential collector and philanthropist.

The artist-duo Elmgreen and Dragset, who explore the relationship between art and design while addressing social issues, will be paired with Chad Leat, a collector and former Parrish trustee, on March 14. Sheree Hovsepian, who creates assemblages using film-based cameras, light-sensitive paper, objects, and the human body, will talk with Ms. Taxter on March 21.

The real-time talks on Zoom will have limited capacity, and participants will be able to engage with the panelists. Tickets are $500 for the series, $250 for individual talks. All proceeds will benefit the museum’s exhibitions and education programs.

Tour With Paton Miller
Paton Miller, a prolific Southampton artist, has somehow managed to find time during the past six years to organize large-scale exhibitions of work by East End artists at the Southampton Arts Center. Mr. Miller will lead an in-person tour of “East End Collected 6,” a show of work by 38 artists, on Saturday at 12:30 p.m.

The free tour is limited to 20 people, and registration on the center’s website is on a first-come-first-served basis.

Rothko Chapel Turns 50
The Rothko Chapel in Houston, founded by John and Dominique de Menil, is celebrating its 50th anniversary with a series of public programs and the publication on Tuesday by Rizzoli Electa of “Rothko Chapel: An Oasis for Reflection,” which provides the first look at the recently restored chapel, the home of 14 murals by Mark Rothko.

Rothko, who spent time in East Hampton in the 1940s and ‘60s, was commissioned by the de Menils in 1964 to create a meditative space filled with his paintings. The black murals incorporate other dark hues and textural effects.

Additional anniversary-related programs will include “Filming the Rothko Chapel,” a Zoom conversation between Francois de Menil, director of the 1972 documentary “The Rothko Chapel,” and David Leslie, the chapel’s executive director, on March 31. The talk will coincide with a virtual screening of the short version of the film.

In honor of the chapel’s commitment to furthering social justice, it will present a two-part symposium exploring the current state of civil and human rights in the United States and how individuals, grassroots initiatives, and policy makers can work together to create a more equitable future for all. The first is set for April 28, the second for Feb. 19, 2022.

Mark Webber in SoHo
Work by Mark Webber, a sculptor from Sag Harbor, is on view as part of a two-artist exhibition at the Anita Rogers Gallery in SoHo through March 27. Mr. Webber is showing eccentric small-scale mixed-media pieces, some freestanding, some wall-mounted, made from disparate materials, among them Hydrocal, brick, string, copper wire, stone, and stucco.