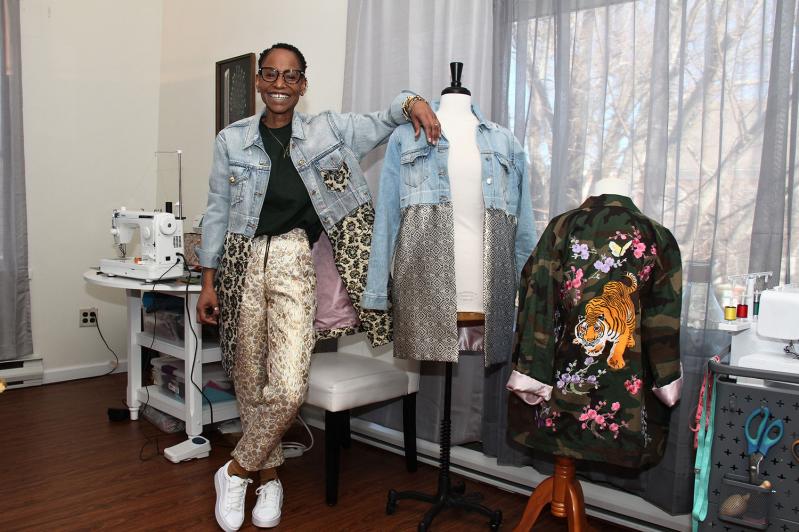 This spring, Jade Ford is launching Citizens and Heirs, her own collection of limited-edition denim-brocade jackets.
Durell Godfrey
By Isabel Carmichael

Jade Ford, a former fashion-shoot stylist turned traveling tailor, was shopping at the East Hampton Citarella one summer day in 2015 when a young man stocking blueberries and raspberries in the produce section noticed her. She saw him looking as she was leaving, and went back the next day, "even though I didn't need groceries, and I tapped him on the shoulder. Sparks flew."

Both were new to East Hampton. The young man, Elvis Jathan, had come from the island of Jamaica; Ms. Ford from Brooklyn. A year later, they were married.

Ms. Ford, who'd worked in Manhattan and Milan for designers and magazines but found herself less interested in posing their models and more in what the models were wearing, had begun hand-sewing and altering clothing herself. Mr. Jathan knew something about that: In Jamaica, everyone, boys and girls both, is taught home economics at school, including sewing. He went out and bought her her first sewing machine, taught her how to use it, and helped her connect with Kathryn Reid of Sew Hampton in Springs, who, she said, "helped me refine my technique and gave me more confidence to explore and create."

Growing up in Los Angeles with a pair of fashionistas, her mother and grandmother, she was "a tomboy who loved sports," but who also had a certain fondness for "mixed prints, patterns, and florals," having watched the grown-ups, who loved to dress up, "put a creative spin on all their items."

"When I think about it," she said, "they introduced me to do-it-yourself way before it became a thing."

Ms. Ford credits living in Brooklyn with bringing out her own imaginative artistry. With a B.A. from L.I.U. Brooklyn in exercise science and a master's in sports management from Brooklyn College, she shifted gears completely after moving there. The place and the people, she said, "opened me up to so much creativity and art and inspired me to create something with my hands and to make it my own. Brooklyn exposed me to the real me. It opened up the creativity I had bottled in me from my mother and grandmother and gave me permission to explore it."

A "huge vintage lover," she often "up-cycles" clothes, coming up, she said, with "cool ways to salvage them. I fell in love with vintage pieces and repairing them, going through my granny's closet after she had passed on." She loves brocade in particular, for its "texture and imagery . . . it brings a special essence to the garment, but I am also bringing a modern, cool spin to it."

Ms. Ford still works by hand as well as on the new machine, on both men's and women's tailoring, taking in shoulders, tapering trousers, and doing custom detailing. "I'm given difficult projects that force me to stretch myself," she said. She rebuilds and alters, including bridal gowns, and works for private clients as well as boutiques.

The pandemic has been a source of many assignments, she said, not only making masks, which she sews "by the hundreds" for boutique owners, but to fill gaps that opened when factories were forced to close. This spring she is collaborating with Matriark, a Sag Harbor boutique that carries upscale fashions by women-owned brands, and launching Citizens and Heirs, her own collection of limited-edition denim-brocade jackets. "Later in the year I will be planning out other ideas of my own."

Ms. Ford credits her mother and grandmother, and of course her husband, that she is "stepping out on faith as a creative designer and tailor in the Hamptons." Her email address reflects her ethos: [email protected].