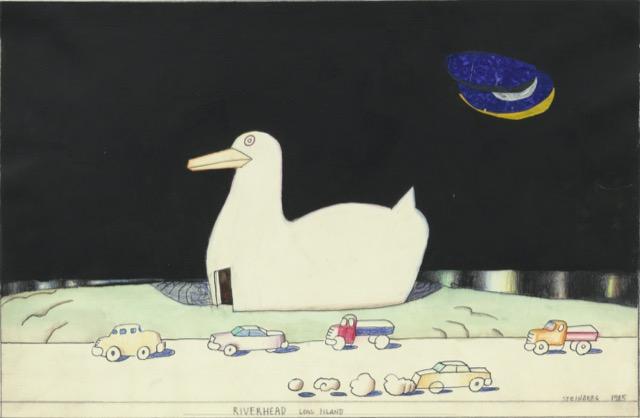 While the holidays may be assumed to have left little of uplift in their wake, there are some art exhibitions that remain on view and more opening to greet the new year and what has historically been the quiet time on the East End.

One of those now on view is the Saul Steinberg exhibition at Pace Gallery in East Hampton. In a welcome development, the local outpost of the international art dealing behemoth has announced plans for programming through October.

Through Jan. 17, the Steinberg show celebrates one of East Hampton's pre-eminent artists, and one who defied labels and the norms of his contemporaries. Consequently, his art remains particularly fresh on first and subsequent viewings. Those who first saw the show when it opened are likely to be rewarded on a second, third, or even fourth look.

Although the centenary of Steinberg's birth was in 2014 (he died in 1999), he remains on point, with canny observations of culture and everyday life. An avid reader, he grew up in Bucharest in a middle-class family and became a student of architecture in his college years in Milan. By the mid-1930s, his drawings and cartoons were being published in Italy. This early success would eventually help him make his way in the United States after he fled European fascism in 1942.

A friend and fellow emigre, Charles Simic, recalled in an essay from a 2006 retrospective that Steinberg said "being an immigrant made one into a child again . . . a child who talked funny and noticed things natives never did. Beauty in America came as a surprise."

This can be seen in drawings such as "Looking Down," from 1988. A view framed by the windows inside a drab apartment is an invitation to a technicolor world full of bustling urban energy. The small collaged cat is an avatar of our own presence, taking it all in from a dizzying and distorted angle with only the streetlights and traffic below to ground it.

"Union Square," from 1982, has a similar celebratory feeling. Although he had been in this country for decades at this point in his career, he never seems to have lost enthusiasm for the sights and vigor of his adopted environment. A much earlier drawing, worked on from 1949 to 1954 and rendered over six sheets of paper, indicates someone who wants to capture a landscape, real or imagined, in its entirety. The postwar scene feels genuinely American, with a touch of wistfulness for the European traditions in which this architecture finds its roots.

Evidence of Steinberg's fascination with structures continues with a drawing from the same period in which shorter elaborate edifices stand in the shadow of a massive modern box in a familiar melange. Other examples include "Paris," from 1984, an untitled drawing of a bank from 1986, a 1969 drawing of cantilevered buildings with other modern features, and a work titled "Chicago."

In "Riverhead, Long Island," from 1985, he features the Big Duck of Flanders. The drawing is one of a few takes on the subject, including one that became a New Yorker cover in May 1987. Once an advertisement for a local duck farm on what was then the main route from the expressway to the South Fork, it stands restored today on the same road in parkland Southampton Town purchased for its siting.

It is typical of Steinberg to celebrate something unique in the landscape that others take for granted. It wasn't the first time he drew inspiration from the area, but the duck represents perfectly his fascination with the absurd meeting his need to incorporate his surroundings in his work. Unlike the New Yorker cover, this duck is depicted at night with a crescent moon hanging low in a black sky. The water of the Peconic Bay casts odd reflections as the cars and trucks zoom past.

Not long after arriving in America, he began his association with many figures in the art world who would find their way here. Costantino Nivola and Charles Addams were two early friends along with a larger group that included Peggy Guggenheim and Betty Parsons, Alexander Calder, and William Steig. Steinberg bought his house in Amagansett in 1959. Even at his most ironic, his landscapes often offer a hint of East Hampton in their topography and evening sky. That same sky can be seen in at least one of the generic "landscapes" here, evidence that even he was not immune to the charms of this region's light.

With only 21 objects, the curator, Mica Mohrmann, is to be commended for capturing so many of the themes and mediums that occupied him over the years. There are the tongue-in-cheek portraits -- of Gogol and his nose and van Gogh and his palette. A dust storm of place names in an elegant cursive in one work references the script, both real words and fanciful swirls, that was another prevalent motif.

Gogol also signals the artist's affinity with literature and his own perception of himself as a "writer who draws." In addition to Gogol, a number of 19th-century writers influenced his work, such as Rimbaud, Stendhal, Dickens, Flaubert, and Tolstoy.

Rubber stamps, both generic and unique to Steinberg, demonstrate his fascination with serial repetition that was fed by the appearance of his illustrations in a mass market publication. The stamps appear in at least one of the works on view, where they serve double duty as representatives of the diplomas and official government stamps that he lampooned in other works. Additionally, a few photographic prints embellished with collage and ink become something other than what they originally set out to be.

Joel Smith, the curator of the 2006 exhibition, posited that there is a special place for Steinberg in the 20th-century canon as part of the "middlebrow avant-garde that addressed the possibilities of mass-produced and mass-distributed artwork -- and thus, in substantial ways, transformed mass sensibilities." In this small but comprehensive show, Pace demonstrates that, but so much more.