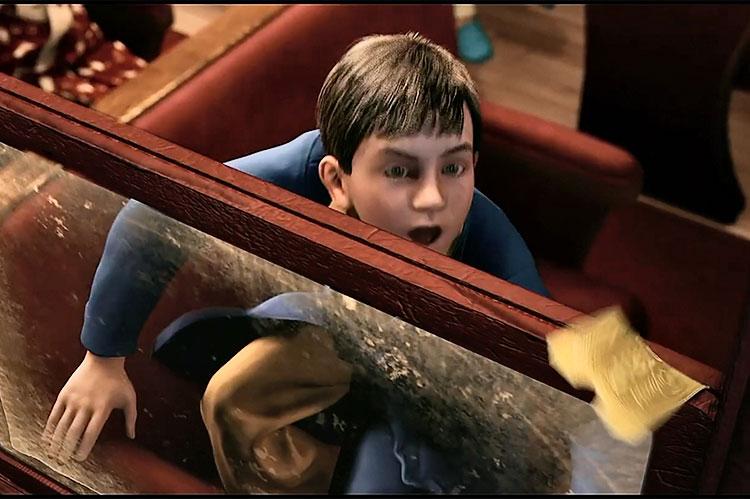 A scene from "The Polar Express," Robert Zemeckis's adaptation of the book by Chris Van Allsburg.
By Mark Segal

The first iteration of "Minutes" features nine holiday landmarks ranging from 1940s classics to Bob Zemeckis's 2004 adaptation of Chris Van Allsburg's famous children's book "The Polar Express." Ms. Vallan explains that Tom Hanks, who optioned the book and stars in the film, didn't want to do a traditional animated film.

"So they filmed it by attaching sensors to the actors and then animating those performers," said Ms. Vallan. "The scene I picked is the most breathtaking scene in a breathtaking movie. It's a tribute to the power of cinema which, of course, is movement."

Other clips, which range from one and a half to three minutes in length, feature two romantic comedies -- Mitchell Leisen's "Remember the Night," written by Preston Sturges, and Ernst Lubitsch's "The Shop Around the Corner," both from 1940.

No holiday roundup would be complete without Vincente Minnelli's "Meet Me in St. Louis" and Frank Capra's "It's a Wonderful Life." Judy Garland sings "Have Yourself a Merry Little Christmas" to her younger sister in the clip from the former film, while James Stewart and Donna Reed fall into a swimming pool while dancing the Charleston in the latter.

Of "Gremlins," Joe Dante's 1984 film, Ms. Vallan said, "It's a very naughty Christmas film. It's not an accident that 'Gremlins' is often called 'E.T.' with teeth." The clip from Tim Burton's "Batman Returns" shows Christopher Walken as a tycoon addressing a radio audience in front of a huge Christmas tree, which echoes the Rockefeller Center tree.

The clip from "Tokyo Godfathers," Satoshi Kon's 2003 animation, features three homeless people, a middle-aged alcoholic, a teenage runaway, and a former drag queen, who, after discovering a crying baby in a trash can on Christmas Eve, set out to find its parents.

Finally, there's Will Ferrell as Buddy in Jon Favreau's "Elf" (2003). As a baby who ended up on Santa's sleigh, Buddy by default grew up at the North Pole surrounded by tiny elves. Ms. Vallan chose a scene that reflects the difficulty of fitting in, one of the comedy's themes.

A second program of "Minutes," also hosted by Ms. Vallan, will be filmed in two weeks. The holiday clips will remain available on the cinema's YouTube page.