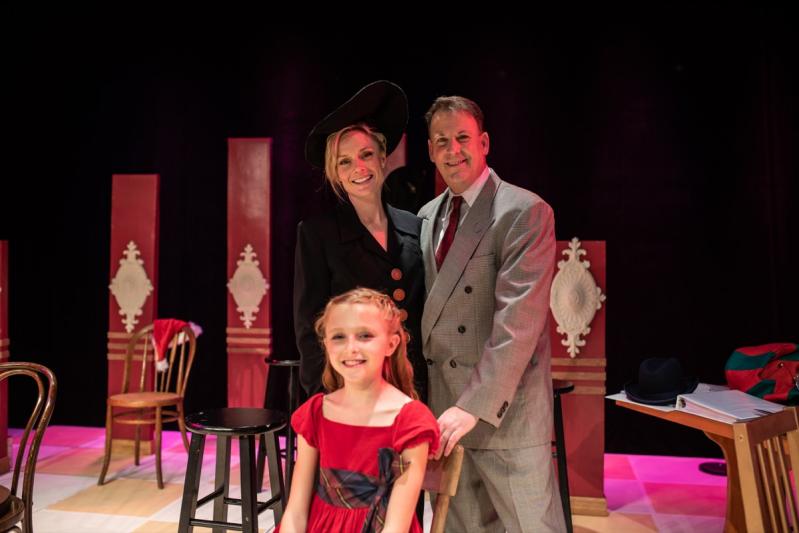 Six months ago, after several years away from the Southampton Cultural Center due to serious health issues, Michael Disher, its artistic director, decided he was ready to return. "I wanted to do something I was familiar with," he said during a recent conversation, "something that would approximate sticking the proverbial toe back in the water as opposed to diving into something new."

His choice combines two formats he is fond of: the live radio play and the musical. "Miracle on 34th Street: A Live Musical Radio Play" will open Friday at 7 p.m. and continue through Dec. 12.

For his previous live radio play productions, "It’s a Wonderful Life," "A Christmas Carol," and "Meet Me in St. Louis," Mr. Disher turned to his frequent go-to guy, Joe Landry, who has six such adaptations to his credit. Mr. Landry informed him that Fox would not release the rights to "Miracle on 34th Street."

A search led Mr. Disher to the 1947 Lux Radio Theater production, sponsored by Lux soap flakes, which was adapted by Lance Arthur Smith, with lyrics, music, and arrangements by Jon Lorenz. The play, which the narrator announced was coming to listeners through "the magic medium of radio," featured the film’s stars, Maureen O’Hara, John Payne, Natalie Wood, and Edmund Gwenn.

The story takes place between Thanksgiving Day and Christmas Day and focuses on a department store Santa Claus who claims to be the real Santa. When his sanity is questioned, a lawyer defends him in court.

The film won three Academy Awards. In 2005, it was selected for preservation in the National Film Registry of the Library of Congress.

While the cultural center’s production must stick to the script, "we are given license to personalize it to the area and to the performers," said Mr. Disher. "It makes it a little more homespun." The stage is set as a radio station in 1947, including a foley table with all the sound effects, "On the Air" and "Applause" signs, and vintage microphones.

Finding period costumes was easy, Mr. Disher said. "I would say, 30 years ago we were slaves to thrift shops and L.V.I.S., but now there is an abundance of period clothing online."

The production will include Christmas carols, including different versions of "Deck the Halls," "Good King Wenceslas," and "God Rest Ye Merry Gentlemen." "If you were a fan of the Andrews Sisters, or if you like rich harmonies and blends, the carols will sound totally different to many people."

Mr. Disher is glad to be working with people he's worked with before. "This was a hand-picked cast. I wanted to be surrounded by people who have done well by me and people I’ve done well by."

Performance times are Fridays at 7 p.m., Saturdays at 2 and 7, and Sundays at 2 and 5. Tickets, which are available from the center’s website or at the door, are $30; $20 for students under 21 and children.