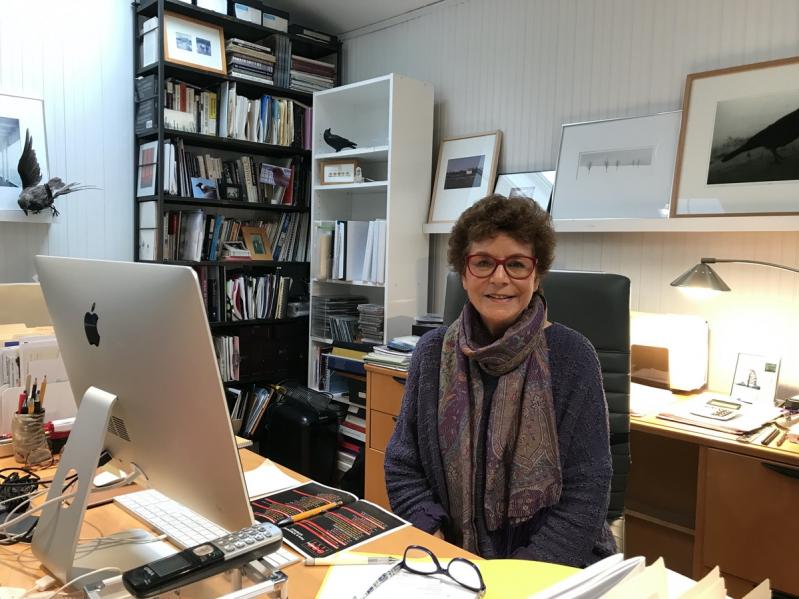 In the fall of 2008, Bonnie Grice, while interviewing Jacqui Lofaro on WLIU-FM radio, asked if “70 x 7: The Forgiveness Equation,” Ms. Lofaro’s new documentary, had been accepted by the Hamptons International Film Festival.

“When I told her it didn’t get in, Bonnie said, ‘This is outrageous, Jacqui. Start your own festival.’ Then I said, ‘Maybe I will, Bonnie,’ very offhand. And I did.”

“It started with nothing. We didn’t charge admission, but people could make donations at the door if they wanted to.” Asked if she had any idea then what the festival would become, she said, “No, none. But my nature is to grow things. I’ve always had an entrepreneurial streak.”

That streak manifested itself long before what is now known as Hamptons Doc Fest. Ms. Lofaro grew up in Greenwich Village and graduated from Fordham University. She wanted to be a journalist, but her parents cautioned her that there was no money in that. “So I went into advertising, worked my way up, and then opened my own firm.”

Warsaw Communications did advertising, sales promotion, and had many fashion industry clients, among them Pierre Cardin. Ms. Lofaro often traveled to exotic locations for photo shoots.

“People would say to me, ‘You’re so lucky, you get to go to Morocco.’ I would say, ‘Are you kidding? I would trade places with you.’” Between getting through customs, assembling the wardrobe, and dealing with clients' illnesses, location work turned out to be an exhausting undertaking.

Her last location shoot was for a J. Crew catalog. “It was insane. My photographer, who was a top fashion photographer, was a wreck because his wife was about to have a baby.”

After the shoot was over, Ms. Lofaro hurried to her house in Bridgehampton, which she'd bought in the late 1970s, “and curled up for two days. I couldn’t move.” She shut down the business as soon as possible and settled in to life on the East End, where she turned her attention to “what is dear to my heart -- the environment.”

In the 1980s, she became involved with the Group for the South Fork, now the Group for the East End, and joined the League of Women Voters, eventually becoming president of the local League, then the state League, and finally the League’s New York State Education Foundation. “You talk about smart people and smart women and substantive issues,” she said with a smile, remembering.

“I have a soft spot in my heart to this day for Bob DeLuca and the Group for the East End, and for what is now the League of Women Voters of the Hamptons, Shelter Island, and the North Fork.”

Because of her work at the League on natural resources, Ms. Lofaro was invited to a Southampton Town meeting about the town's 1990 Comprehensive Plan. Always drawn to land-use issues, she wound up on the town's planning board, where she has served for almost 20 years and is the chairwoman.

“I love the planning board. Over the years I’ve seen more and more applications -- not two-lot subdivisions, but much larger. Whenever I hear a land-use lawyer saying, ‘That will never happen, Jacqui,’ I’m so skeptical, because it’s all happening. I fiercely defend the environment” -- a position that, in the early years, often put her in the board’s minority.

As if Ms. Lofaro didn’t have enough on her plate, she eventually found her way to LTV, East Hampton’s public access channel. With Larry Penny and Rameshwar Das she formed Terra TV, which produced some 25 half-hour shows dedicated to environmental issues.

Several years later, the documentary filmmaker Victor Teich, a friend, asked if she'd like to work with him on a film about the death penalty. She agreed, but, knowing that he felt strongly about the issue, only on condition that the film would be open to opinions on both sides.

They started work in the mid-90s and released the film in 2003. “That’s where my love and appreciation for documentary filmmakers really took root,” Ms. Lofaro said. “You produce for half a year, and then you’ve got to fund-raise. You’re writing grant applications and hoping you get enough money to take it to the next step.”

“The Empty Chair: Death Penalty Yes or No,” a 42-minute film, tells four stories of murder victims’ families reliving the crimes and confronting the loss of their loved ones. Their first instinct for revenge, during the trial, followed by debate over the death penalty, leads to a search for forgiveness and healing.

The film debuted at the 2003 Hamptons International Film Festival and went on to win the Death Penalty Information Center’s Thurgood Marshall Broadcast Journalism Award in 2006. Amnesty International screened it at 700 locations across the country.

“70 x 7: The Forgiveness Equation” came out of stories the filmmakers couldn’t include in “The Empty Chair.” “Forgiveness seemed to be the lens when you’re looking at the death penalty," Ms. Lofaro suggested. "If you could entertain forgiveness, you might move away from a pro-death penalty position.” The film was also shown at a conference of the National Coalition Against the Death Penalty.

Ms. Lofaro’s third documentary, completed in 2009, is “The Last Fix: An Addict’s Passage from Hell to Hope.” The film focuses on three addicts on the East End who were offered an alternative to incarceration by the East End Regional Intervention Court, sometimes known as the Drug Court.

EERIC was founded in 2004 by Southampton Town Justice Deborah Kooperstein, who is Ms. Lofaro’s spouse. “That’s her passion,” said Ms. Lofaro, “helping people on a mission to break a cycle. You break the cycle of drugs, you can maybe break the cycle of criminality.” The filmmaker had access to the court, came to know its people, and selected stories that would be representative of its mission.

Now in its 14th year, Hamptons Doc Fest has a committee that looks at all submitted films, of which there are several hundred annually. In addition, the festival’s artistic director, Karen Arikian, “is always on the lookout for films that have risen to the top in the festival circuit.”

“One of the reasons I started this festival is because I knew what it took to make a film, produce it, raise money for it, get it into outreach markets -- and make no money. And hope you get seen by people.”

When the festival began in 2008, there were very few opportunities for documentary filmmakers, she said. The streaming platforms that have emerged in the last few years enable more people to see documentaries, and make it easier for filmmakers to finance them.

“It’s harder for a festival now, because you have almost simultaneous screening with streaming and theatrical release. I think the whole model is changing, and it’s a challenge to smaller film festivals like ours. We’ll see.”

“What I love is that ours is a filmmakers’ festival. D.A. Pennebaker always came and sat in the same seat at Bay Street, and Chris Hegedus is wonderful and carries on. We have people like Roger Sherman, Susan Lacy, Lana Jokel, Nancy Buirski, Nigel Noble, and Don Lenzer, and they all come for the Saturday-night event.”