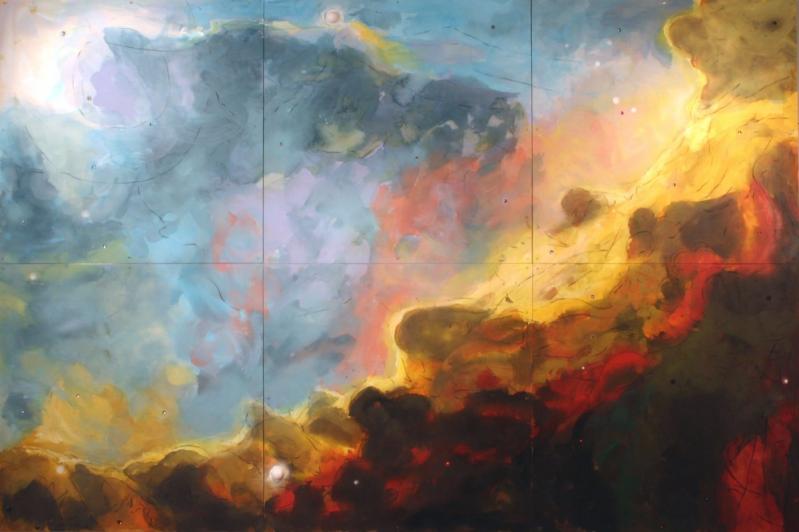 The Parrish Art Museum in Water Mill will have a trio of shows to take its exhibition program from fall and the holidays into the new year.

Opening to the public on Sunday are solo examinations of the work of peter campus, Virginia Jaramillo, and John Torreano, and they will remain on view through Feb. 27, 2022. Each includes recent work from mature artists that has not been exhibited previously.

Mr. campus, known as a video and new-media artist, adopted video back in 1971 and never went back. His recent work involves video capture from a static position of various landscapes around East Patchogue and Shinnecock Bay. The exhibition will feature nine of these pieces, all looped on separate monitors. The subjects include a floating duck blind, a fence tangled with red safety netting, and a wind-blown tree and beach grass.

The museum calls these subjects and the others the artist captures "visual meditations" that "underscore the gap between what the viewer perceives, what the camera records, and what the artist brings to the fore."

The artist's undergraduate degree is in experimental psychology. He then studied at the City College Film Institute in New York, receiving a John Simon Guggenheim Fellowship and a National Endowment for the Arts Fellowship in the mid-1970s. His work is in many significant public and private collections.

"Virginia Jaramillo: The Harmony Between Line and Space" showcases five of the artist's recent paintings, which she made in her Hampton Bays studio. They include two 12-foot canvases, "Quantum Entanglement" and "Quanta," that will be installed facing each other, their expanses of color "crisscrossed by impossibly uniform, razor-thin lines." According to the museum they are "the artist's visualization of communication between quantum particles across the vastness of space." Other works evoke the earliest spoken Irish poem, "Song of Amergin," a confrontation between technology and creativity, and the unconscious mind.

Ms. Jaramillo was first accepted into the Los Angeles County Museum of Art's annual survey of contemporary art in 1959 while still an art student, masking her gender by exhibiting under the name V Jaramillo. Although primarily a painter throughout her career, there was a period beginning in the late 1970s to the '90s when she made handmade paper and linoleum compositions. She was the subject of major survey this year at the Menil Collection in Houston.

Sag Harbor's John Torreano works in multiple mediums: paint, sculpture, relief, furniture, and hand-blown glass. His exhibition, "John Torreano: Painting Outer Space/Inner Space, 1989 to Present," will encompass 10 large paintings on plywood inlaid with gems and wood balls, evoking the cosmos. They were inspired by images from the Hubble Space Telescope. While based in recognizable phenomena, they can also be seen as nonobjective abstraction, contrasting "the physical with the illusory," the museum notes.

The artist has had a long and successful engagement with gemstones -- real and fake -- placing them in different contexts and lighting. He taught studio art at New York University in Manhattan and in Abu Dhabi for three decades.