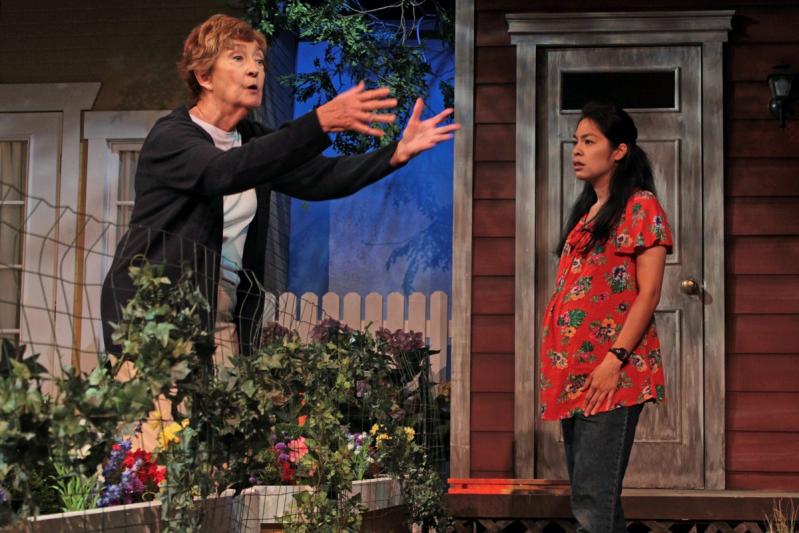 "Good fences make good neighbors," states a character in Robert Frost's "Mending Wall," which laments the seemingly universal xenophobia that people harbor toward one another.

It is no coincidence that this line is quoted in Karen Zacarias's comedy-drama "Native Gardens," a production of which is now running at the Hampton Theatre Company in Quogue.

Sly and perceptive, "Native Gardens" explores the differences -- racial, socio-economic, and political -- that have befallen contemporary America. It is also a work that falls directly in the wheelhouse of this theater company, which thrives on satire and social comedy.

The setup is ingenious. An ambitious, self-consciously liberal young couple, Tania and Pablo Del Valle, move into a "fixer-upper" in an upscale Washington, D.C., neighborhood. Next door to them are Virginia and Frank Butley, who welcome the couple with open arms -- at first. Chocolate and wine are exchanged, and there are friendly chats in the Butleys' backyard, which directly adjoins the Del Valles' property.

Despite the political and age differences -- the Butleys are Republican, the Del Valles liberal Democrats -- there seems some tenuous common ground. The Butleys listen to NPR, after all, "almost voted for Obama" in the first election, and "love" Mexico -- no matter that Pablo is Chilean and Tania from New Mexico. Both love gardening, though Tania favors low-impact, eco-friendly plants to Frank's environmentally taxing flowers. (It is part of Ms. Zacarias's talent that these small differences already begin to manifest the troubles to come.)

Soon, however, Pablo, a budding lawyer, takes a look at the survey and realizes the Butleys' property encroaches two feet onto the Del Valles' -- the very two feet that inhabit Frank's beloved flower garden. Tania is ready to forget the whole thing -- it's only two feet, after all. She changes her tune when Pablo points out the square footage holds a value of nearly $40,000.

When preliminary discussions with the Butleys devolve into name-calling, the gloves come off and the comedy kicks into overdrive.

The production's casting is nearly perfect. Martha Kelly and Terrance Fiore are outstanding as the well-meaning but slightly selfish middle-aged couple. Equally good are Samantha Herrera and Edwin Alexander Cruz as the good-natured, if slightly sanctimonious, millennials.

The kick of "Native Gardens" is watching how quickly the facades of these two couples crumble once money and property rights are at stake. The good liberal Del Valles begin to show a sudden but inordinate interest in money, for example, and the "compassionate Republican" Butleys resort to racially tinged attacks when things turn ugly. Cross words turn into stone-throwing, and eventually a chain saw comes out.

The actors handle all this deftly, and no matter how petty and selfish each side becomes it's a tribute to these players that the audience still likes each couple no matter how low they stoop. (The director George Loizides, incidentally, has an uncredited but very funny turn as a silent, Chaplinesque landscaper.)

Gary Hygom's set is the most ambitious for HTC in recent memory, displaying the facades of the two adjoining homes and their economic disparities. This includes a very real-looking oak tree in the Del Valles' yard, and a general feeling of claustrophobia in the proximity of the two properties.

"Native Gardens" was written just before the time of Trump's victory in 2016, and credit must be given to Ms. Zacarias's prescience at how divided the nation would become. The "good fence" of the play is, after all, as in the Frost poem, a mere metaphor -- this time for the socio and political extremes that plague contemporary America.

It is also a sly aside to the Trump wall that was being pitched during the 2016 campaign, though here the tables are turned. "I'm going to build a fence to keep you out!" exclaims Tania to Virginia and Frank. "And you're going to pay for it!" adds Pablo.

The production, running through Sunday, couldn't be a more timely or well-executed comedy.