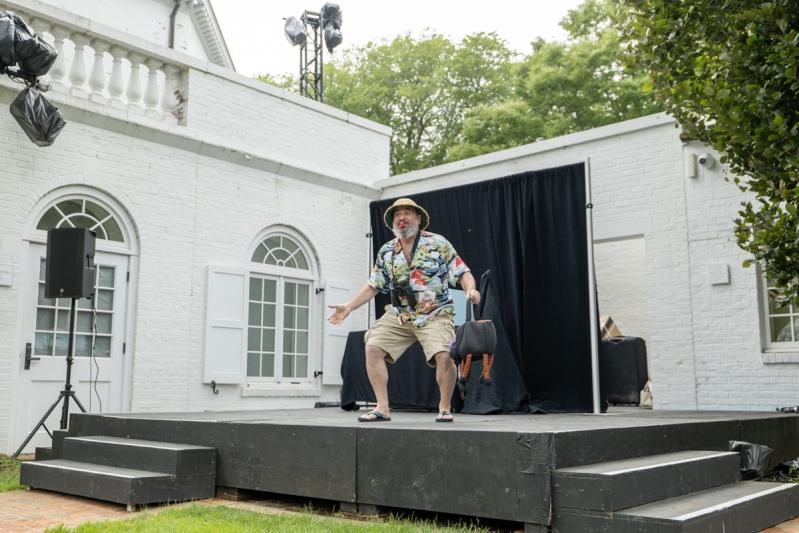 Josh Gladstone had some fun in the backyard theater Guild Hall built last year to allow for live programs during the pandemic.
Joe Brondo for Guild Hall
By Jennifer Landes

There's never a perfect time to leave an organization, but Josh Gladstone said now is as good as it gets to move on from Guild Hall.

After more than 21 years as the artistic director of Guild Hall's stage program, and after leading it through its 90th anniversary this year, he has announced his retirement from the institution at the end of 2021 to pursue other opportunities.

On Friday, he said his plans were to continue working in theater, but on his own projects, keeping a hand in producing, directing, acting, and writing. "I'd like to think I've got another chapter or two in me in terms of work," he said. "I'm at a different place now at this age than I was when I was a 32-year-old man with a young family."

In addition to the pandemic, he turned 50 in the past couple of years and began to reassess where he wanted to be in his life. "I'm noticing 21-and-a-half years is a good long run in one place."

Mr. Gladstone has been with Guild Hall since 2000, after being invited by its then board chairman, Mickey Strauss, and executive director, Ruth Appelhof, to run its performing arts programs. He, his wife, Kate Mueth, and their infant son, August, relocated from Brooklyn to Springs and have been active in the community ever since.

Although he is considering a number of projects in New York City, he and Ms. Mueth plan on keeping Springs as their home base. Their son, who has recently graduated from Emerson College in Boston, plans to pursue a screenwriting career after being accepted into a writers program in Los Angeles.

Mr. Gladstone noted the number of Ms. Mueth's community projects, including the programs and performances she produces on her own and through Neo-Political Cowgirls for the public and in the East Hampton schools, and the Little Free Food Pantries her company has set up in a couple of locations in the town.

The past three seasons have been a whirlwind, with 2019 an all-time record breaker at the box office, the shutdowns and other challenges of presenting live performances during Covid, and this year's marking of Guild Hall's 90th anniversary.

"We had three years in a row that were astonishing for their own reasons," he said. The theater staff's "show must go on" ethos lead to devising 20 outdoor programs for a 10-foot stage built outside in August 2020 and learning how to produce theatrical programs digitally both last year and this season. Being a live, virtual, and off-site theater was both exciting and exhausting. "It was a big, big job," he said. Leaving now, he said, would give him a chance to "go out with a smile and take a graceful bow."

Guild Hall said on Friday that it will begin a national search to find a new artistic director for its performances. In July, it announced it had launched a $10 million capital campaign to renovate its buildings, invest in "cutting-edge programming," and build a reserve fund.

After marking its 90th year, "Guild Hall is in an exciting transition moment" anticipating its centenary, he said. "There are a lot of new ideas. There's a lot of renovation work coming, and I think it's time for an infusion of new younger performing arts leadership."

He does plan to be there, applauding, when the new theater celebrates its opening night. Adding to his excitement will be the freedom from worrying about "everyone's hotel room, reimbursement for travel, and contracts," he said. "I'd just love to go and enjoy it from the audience's perspective and not feel 21 years of intense responsibility."

Mr. Gladstone spent childhood summers in Amagansett before starting the Hamptons Shakespeare Festival with his cousin David M. Brandenburg in 1996. To Guild Hall, he brought productions of "Hamlet," "Macbeth," "Julius Caesar," and "Romeo and Juliet" in addition to a run of successful and beloved productions of "Equus," "Moby Dick Rehearsed," and "All My Sons," along with numerous star-studded staged readings.

Some of the other programs he started at Guild Hall include the experimental JDT Lab for theater, the Guitar Masters mini-festival, Questlove's "Conversations on Creativity," and the annual "Summer Spectaculars" that used to mark the start of the season, with performances by the Beach Boys, Martin Short, Mandy Patinkin, Patti Lupone, Jay Leno, Audra McDonald, Liza Minelli, and Steve Martin. He also brought the popular The Met: Live in HD series to the theater.

Working with so many giants in their fields, "being a little star-struck is part of the fun." He recalled "going around backstage with Steve Martin and there's Liza Minnelli lying on the couch taking a nap before the show."

But one of his personal favorite "peak moments" from more than two decades happened in the early 2000s, when Guild Hall co-produced the readings of the Playwright's Theater of East Hampton, founded by Perry and Mitzi Pazer. Through happenstance, he became responsible for driving Jack Klugman, Charles Durning, and Len Cariou -- three actors in one of the productions -- to the Pazers' house for lunch.

When he was a child, he saw Mr. Cariou in the original "Sweeney Todd" musical on Broadway, where he "scared the hell out of everyone in the audience . . . probably one of the things that made me want to be in the theater." Klugman he had loyally followed since childhood, and Durning was "one of the greatest character actors of the 20th century."

"I'm just driving them and they're shooting the shit about the industry, talking about who got what job where, and 'this director doesn't like me and won't bring me in,' " he recalled. He began asking them questions and became part of their conversation.

"That was one of the great surreal moments for me. . . . So there's been a lot of them like that, but that was one that stands out. It was just a weird, then wonderful moment."

After being in talks for several prospective projects, he should be able to announce one of his new ventures soon. In general though, he's leaving himself open to all of the possibilities of the next chapter. "I don't know what it's going to look like exactly. That's kind of scary, but the amazing thing about this is that I know that it's the right time to make a leap into something new. . . I don't think I can leave on a higher note."