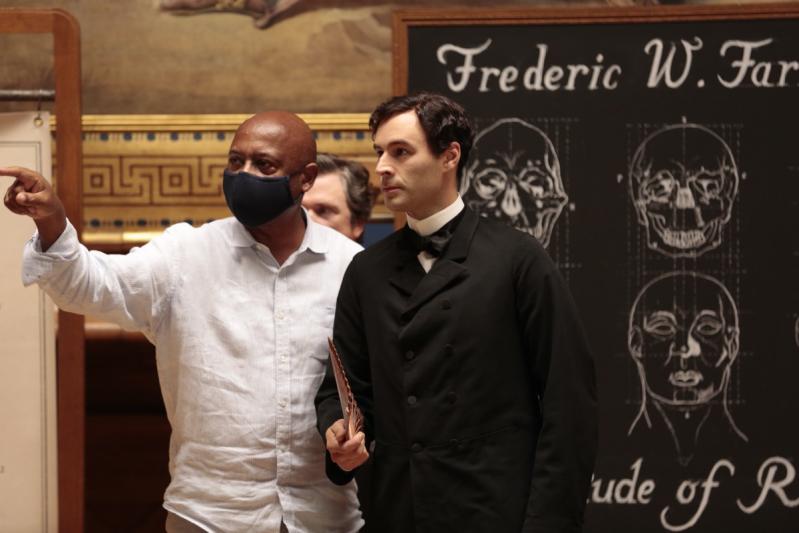 Raoul Peck, the director of “Exterminating All the Brutes,” with the actor Eddie Arnold
Velvet Film: David Koskas/Courtesy HBO
By Mark Segal

Rethinking History
Raoul Peck, an Oscar-nominated director, screenwriter, and producer from Haiti, will be at the Sag Harbor Cinema on Monday evening at 6 for a screening of the first two episodes of "Exterminate All the Brutes," a four-part HBO documentary series.

"Exterminate All the Brutes" combines documentary footage, archival material, animation, and interpretive scripted scenes to challenge the audience to rethink how history is being written. The series, based on three works by authors and scholars, revisits and reframes the meaning of the Native American genocide and American slavery and their implications for the present.

Monica Castillo of rogerebert.com has called the series "a striking piece of nonfiction work that has the intellectual rigor of an advanced history course."

A question-and-answer session will follow with Mr. Peck and Jennifer L. Morgan, a history professor and author of "Reckoning With Slavery, Gender, Kinship, and Capitalism in the Early Black Atlantic." Tickets are $15, $12 for senior citizens and people with disabilities, and $7.50 for children 12 and under.

Classical Piano
The Church in Sag Harbor will present a concert by John Kamitsuka, a classical pianist, on Saturday at 7 p.m. Mr. Kamitsuka performs regularly throughout the United States, Europe, South America, and Japan, including at Lincoln Center's Alice Tully Hall, the 92nd Street Y, and the Weill Recital Hall.

The program will include several compositions by Beethoven and Bach. Tickets are $30.

Salon Series Returns
The Salon Series at the Parrish Art Museum in Water Mill will open its fall season with a recital by Solomon Eichner Friday at 6 p.m. An award-winning pianist in competitions worldwide, Mr. Eichner will perform a series of short works from the Baroque, Classical, and Romantic periods by Bach, Gluck, Debussy, Chopin, Liszt, Schuman, Kapustin, Tchaikovsky, and Rachmaninoff.

Music on the Rock
The Shelter Island Friends of Music will return to live music performance on Saturday at the Shelter Island Presbyterian Church. The featured musicians in the group's first concert since February 2020 are the Merz Trio, pianists who will perform their "Quiet Cities" program, music from a variety of composers (from Hildegard von Bingen to Haydn and Alma Mahler to Alban Berg) that evokes a private world. The program will conclude with Brahms' B Major Trio with Schumann's "Widmung."

The free (donations appreciated) concert begins at 7 p.m.  A reception with the musicians will follow. Masks are required during the concert, and social distancing is recommended at the reception.