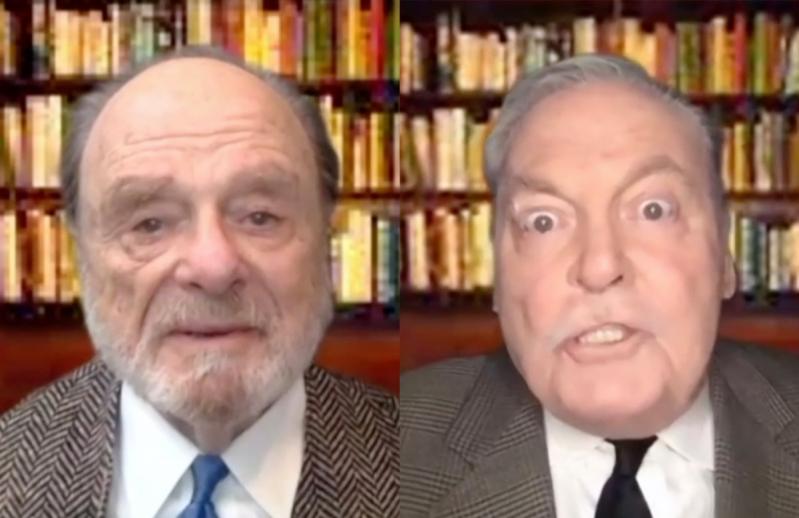 The world premiere of "Vienna," a two-person play starring Harris Yulin and Stacy Keach as Sigmund Freud and Carl Jung, will be available on YouTube from Sunday through Wednesday at 8 p.m. The free broadcast is a benefit for the Actors Fund.

"Stacy and I are always on the lookout for something we can do together," said Mr. Yulin in a phone conversation. "Once the pandemic hit, nothing was going on except our individual Zoom productions." While they were kicking around ideas for things they could do on film or Zoom, Mr. Keach "came up with Freud/Jung."

Over the next few months, Mr. Yulin, Mr. Keach, and Jim McGrath, a writer, met two or three times a week. "First Jim came up with a form, then we tore it apart, and put it back together, innumerable times."

While Mr. McGrath gets writing credit for "Vienna," the three developed the play together, said Mr. Yulin, drawing from the psychoanalysts' letters, writings, and other sources. Most of the dialog is in Freud's and Jung's words.

Due to the circumstances of filming -- Mr. Yulin was in Bridgehampton and Mr. Keach in Poland -- the set-up is Zoom friendly. Each man is filmed head-on, while sitting in the same virtual book-lined alcove. Roughly half the film consists of a split screen containing both figures, and the rest shifts back and forth from one to the other. Both men are dressed in tweedy suits and ties.

The dialog carries the details of their fraught relationship. A close friendship developed between the two men early in the 20th century, with Freud playing the roles of mentor and father figure, and for six years they cooperated in their work. In 1913, the year after Jung published "Psychology of the Unconscious," which marked a theoretical divergence between the two, their relationship fractured.

Their dialog is at times intercut with archival footage of the period under discussion, including filming of book burning in Berlin in 1933. Ruefully, Freud says, "My books, Einstein's, Upton Sinclair, Zola, Proust . . ." and goes on to say in medieval times they would have burned him as well.

Much of the second half of the play includes Freud's charges that Jung was anti-Semitic and not sufficiently resistant to the Nazis. Jung defends himself vigorously, adding that he tried to get Freud safely out of Vienna when it was under Nazi siege.

While they men never met again after 1913, there is some softening late in the play. At one point Freud says to the camera, "The loss of Jung was an amputation," while Jung admits, "I never truly recovered from the loss of Freud's love."

Mr. Yulin said he and Mr. Keach are discussing the possibility of doing the play as a film, if the responses to the premiere are positive. "We would do it somewhat in the same style, not a naturalistic film, but something like what we did in 'Vienna.' "

The link to "Vienna" will be available at stacykeachzoomtheater.com, where donations to the Actors Fund have been requested. The 90-minute video includes an entertaining intermission with a message about the work of the fund.