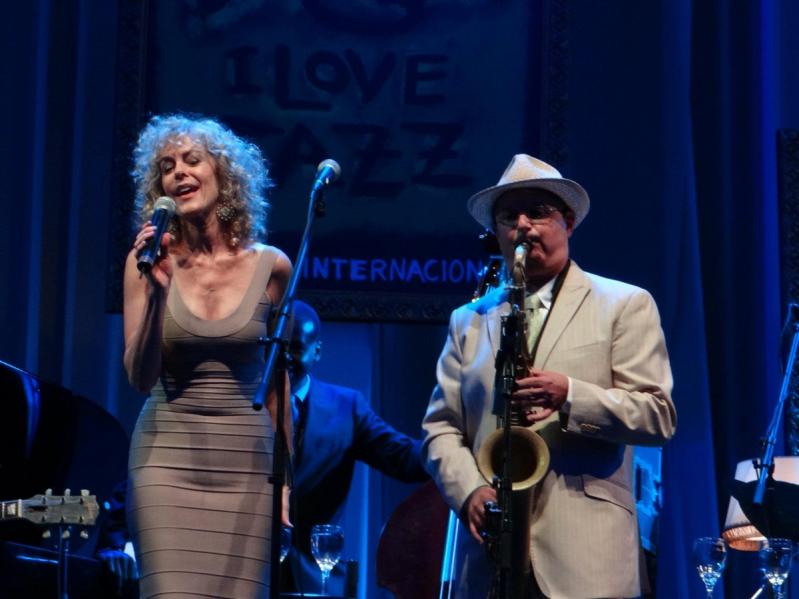 After a return to performing and traveling earlier this year, Judy Carmichael will be at Bay Street next weekend.
By Christopher Walsh

Sag Harbor's own Judy Carmichael, a Grammy-nominated pianist and singer, will perform "Swing! I Go for That" live and in person on Dec. 4 at 8 p.m. at Bay Street Theater in Sag Harbor.

Ms. Carmichael, nicknamed "Stride" by none other than Count Basie, is a leading interpreter of stride piano and swing.

More recently, the California native added vocals to her performance, with her singing debut on her 2008 album "Come and Get It" followed by 2013's all-vocal "I Love Being Here With You."

She is the host of "Judy Carmichael's Jazz Inspired," a weekly radio program and podcast on which she interviews celebrated creative people who are inspired by jazz, from musicians including Billy Joel and Jools Holland to the astrophysicist Neil deGrasse Tyson and actors such as John Lithgow and Blythe Danner. The show airs locally on WLIW 88.3 FM on Sundays at 7 p.m.

"Swing!" will be her first performance at Bay Street in two years. Chris Flory on guitar and Pat O'Leary on bass will accompany her.

It was only recently that Ms. Carmichael resumed what was once a busy touring schedule that has taken her around the world: Earlier this month, she performed for one week aboard a cruise ship in the waters around Barbados, then flew to Montana for a single performance before returning to the tropics, where she is at present aboard another cruise ship as it sails from Belize to St. Kitts.

"I'm so happy to be back on the road, to be back playing after so long," Ms. Carmichael said last week, shortly after landing in Montana. "Now I'm pretty busy, but it's nice. I'm grateful to be playing piano again."

She admits to having had "moments" during the pandemic -- the world virtually shutting down, her performances canceled and venues closing indefinitely if not permanently. But, she added, "I felt grateful. I couldn't feel sorry for myself. I was in a beautiful place; I didn't have a flock of kids to homeschool. I hadn't been home for that long in 20 years, at least. I thought, maybe this is going to be good for me, a rest from all those airplanes."

In that long stretch of downtime, she taught herself film editing, "made some funny films to post, and got better and better at that." She also worked on a book celebrating "Jazz Inspired," which is about to mark its 21st anniversary. "So I found other things to do," she said. "I can't complain -- I used the time to my advantage and am grateful for that."

But there is a time for caution and a time for swinging, and as Covid-19 vaccines get into more bodies, many people have resumed, if cautiously, a pre-pandemic lifestyle and are hungry for the communal experience of live music performance. "People are yearning to be normal again," Ms. Carmichael said.

"This is one of their first in-person events" since reopening, she said of Bay Street. "I am thrilled with that. It's always my favorite gig, in a way, because it's the hometown gig. I love that theater, and lots of my friends come."

She promises to debut some new compositions -- "pandemic tunes" -- as well as the music for which she is best known: selections from the Great American Songbook, revered and influential American popular songs and jazz standards from the first half of the 20th century. Some of these may be "new things I've had a chance to focus on during this time," she said.

The Bay Street building and theater have been renovated with upgraded air ventilation, and all admission is available via touchless ticketing. Those attending must show proof of vaccination and will be required to wear a mask throughout the performance. No food or beverages will be allowed in the theater.

Her return to live shows "has been very emotional," she said, and not just for herself, but "for the person introducing me, for the audience. It's actually funny -- on the cruise, people were cheering and whistling, it was rock-concert behavior at a jazz concert. Yeah, baby, keep it coming!"