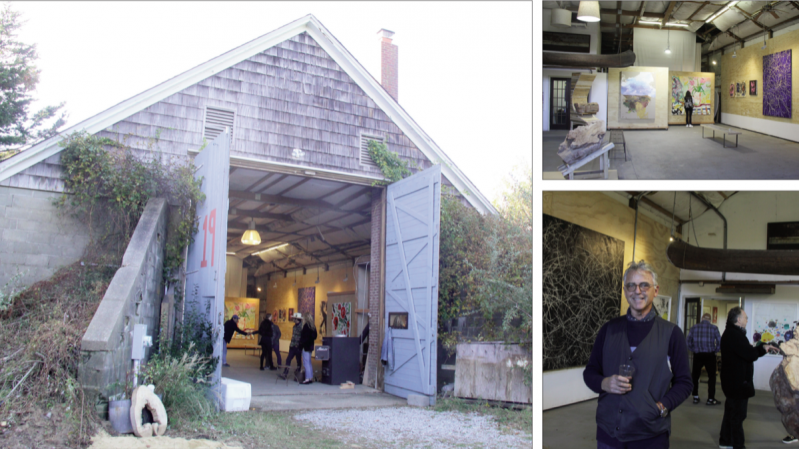 The Lester barn in East Hampton was the site of a group exhibition organized by Mark Wilson, above right, who stopped for a photo during the show's opening.
Durell Godfrey Photos
By Mark Segal

While surveying the exhibition he organized recently of his work and that of seven other artists, Mark William Wilson said, "People were here yesterday and said, 'This is the best gallery space in the Hamptons.' "

The space, a vast barn on Skimhampton Road in East Hampton that originally belonged to Sam Lester, has been Mr. Wilson's studio for three years -- until he learned in October that he would have to vacate within three weeks because the property was being sold.

There is a long history on the East End of artists repurposing barns into studios. Among the pioneers was John Little, whose barn studio is now sited at the Arts Center at Duck Creek in Springs. Steve Miller, Terry Elkins, John Alexander, Hector Leonardi, and Karen Hesse Flatow are among the fortunate few whose converted barns continue to provide space conducive to large-scale artworks.

As for the Lester barn, the painter Kryn Olson had been there for several years before Mr. Wilson took it over. The day before taking down the exhibition and beginning to vacate the building, Mr. Wilson noted that vernacular architecture, "the essence of what this area was about, was taken over by people like myself, artists, using the barn spaces."

"The sad thing is that a space like this is going to be pulled down to make way for a mediocre spec home. So we lose the authenticity of the place and the memory of what had happened here. It's all a bit of a land grab, and you can take that all the way back to the indigenous people who were here initially."

However, Mr. Wilson was not blaming the owners, Sam Lester's daughter and her husband, for selling. They have been generous landlords, and "she grew up here, so for her it's a big shift."

On the subject of place, he cited Bruce Chatwin's book "The Songlines," which explores Aboriginal song in Australia and its connections to nomadic travel. "The memory of the place comes up through the land and out through their song," enabling them to navigate a space without landmarks.

Mr. Wilson's fascination with the memory of place led to "Earth," his series of large paintings that engage the art of the American Impressionist William Merritt Chase. He essentially copies a Chase painting, in one instance "The Bayberry Bush," and affixes it to a larger canvas on which he expands the original.

"It's a painting within the painting. By using the same color palette of the Chase painting, I can compress time and reveal how it is we perceive abstraction through nature." Central to the sense of place is the quality of "this North Atlantic reflective light that makes this all conducive to the pleasures of the experience of the East End."

The barn exhibition included several of Mr. Wilson's "Earth" paintings, which were shown previously at the Parrish Art Museum in 2019, and there are more to come. He has set his sights on Thomas Moran's work as the next touchstone for the series, which will be exhibited during the spring and summer of next year at the Gardiner Mill Cottage Gallery in East Hampton.

In addition to his own work, the barn exhibition included paintings by Darius Yektai, Suzannah Wainhouse, Mr. Miller, Nick Weber, and Kevin Teare, mixed-media works by Pipi Deer, and sculpture by Evan Brownstein, local artists all.

He has done projects that involved placing work by local artists in houses, but this was the only group show he mounted in the Lester barn. As for the future, while he is not interested in running a gallery full time, "I would like to continue sort of what I started in the barn. And if I find the right space, I will do that."

In the meantime, he said he was thinking of building several large plywood walls, dropping a tarp over them, and painting outdoors as Julian Schnabel does in Montauk. He first met Mr. Schnabel in East Hampton in the '80s and worked for him for a time.

While Mr. Wilson first came to East Hampton in 1984, after having moved to New York from Australia, his permanent move east happened in 2009. "Somebody was reading The East Hampton Star, and I looked over their shoulder and saw in the classifieds that there was an artist's studio for rent. I thought why not take a look." The moment he crossed the threshold, he thought, "This is my house."

He rents that Springs house, which includes a studio space, for eight months each year. The summer months he spends in a 400-square-foot house in the dunes on Lazy Point, which he said would be a perfect site for his outdoor studio.

While losing the barn presents Mr. Wilson with a dilemma, he did admit to having "good real estate karma, although I've never owned." He had a seven-story building on Bond Street in NoHo where he lived and worked rent-free for two years in the mid-'80s.

But he agreed that dedicated studio space on the East End is priced out of most artists' reach. "That eventually happened to me in New York. I was used to living in loft spaces in the 1980s. These days if you've got a loft you're making lots of money."

During a second conversation at his Springs home and studio, he reflected on his "Earth" series. "This whole idea of continuity, a place having a memory, the quality of the light, and being able to compress time within paintings, and all these ideas that come up are not thought out ahead of time, they reveal themselves as you do the work. That's truly the mystery of making art and being creative, it's bringing the invisible to the visible."