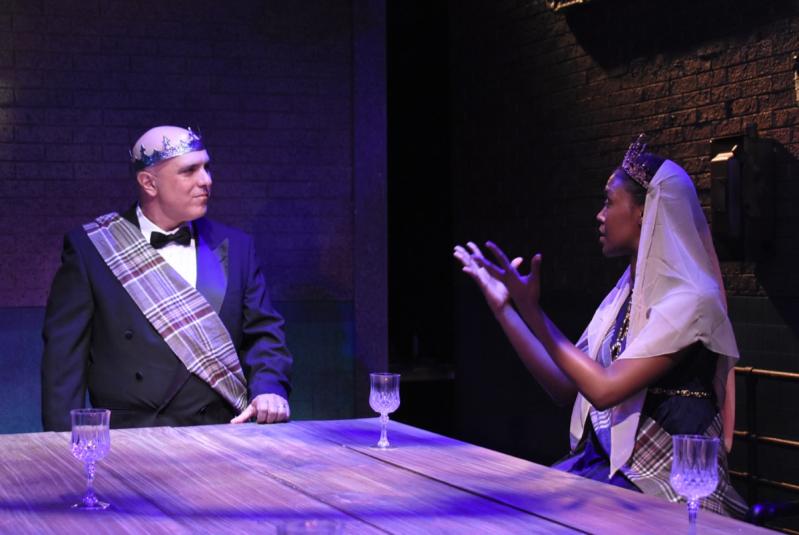 Although this performance is strictly a streaming event (available now through Dec. 5 on the Bay Street website), it is a step forward technically from last year's "Moby-Dick," which was available only by Zoom. And so we creep one step closer to normalcy . . .

The series is designed, at least in part, for students. I suspect many of them will be quite pleased with this filmed version of "Macbeth," which includes quick cuts and nifty special effects, all the while clocking in at a propulsive one and a half hours. It is a quick, bite-sized version to introduce younger viewers to the Bard, and a bloody thriller to boot.

Shakespeare enthusiasts, however, are likely to find the production truncated and a bit rushed.

You know the story, of course. Macbeth, a Scottish nobleman, and his ambitious wife plot to kill King Duncan and take over the throne. The plot is successful, though through a series of tactical errors, bloody overreach, and mental dissembling brought on by their own guilt, Macbeth and his wife succumb to revenge and suicide. Pass the Raisinets.

"Macbeth" is Shakespeare's shortest play, half as long as "Hamlet," but here the director, Allen O'Reilly, pares it down even more, sometimes moving through scenes so swiftly that the audience -- and the actors, for that matter -- barely have a chance to register the horrors that are piling up.

Joe Pallister -- so wonderful a few years ago in the Literature Live! series as George in "Of Mice and Men" -- seems less comfortable here as Macduff, and his reaction to discovering the death of King Duncan is oddly muted. "Confusion now hath made his masterpiece," Mr. Pallister intones, in a hushed, even timbre that suggests rational control rather than confusion.

Similar is the reaction of Macbeth to the news of his wife's death. When Matthew Henerson, very good here as Macbeth, is told that his wife has killed herself, there is nary a moment of repose or dismay; instead, he turns instantly to the camera and recites his lines -- among the best in the English language -- as if they were ready-made rather than the result of painful reflection. "Out, out, brief candle! / Life's but a walking shadow, a poor player / That struts and frets his hour upon the stage / And then is heard no more. / It is a tale told by an idiot, full of sound and fury / Signifying nothing."

Still, amidst the brisk direction, there are memorable performances, including by Mr. Henerson, who is otherwise savage and intense as Macbeth, Erin Margaret Pettigrew as regal Lady Macbeth, and Teresa DeBerry, whose sudden switch to a baby-voiced witch is truly chilling. The murder of Banquo is skillfully staged and stomach-churning in its gruesomeness.

But the real centerpiece here is the stark set and use of film language.

Mike Billings, the set and lighting designer, offers a suitably dreary atmosphere and mise en scene for this production. Discarding Shakespeare's Scottish castle setting, Mr. Billings offers a minimalist set that suggests a 20th-century sanatorium. It is a stroke of inspiration: Madness and pestilence already hang over the text of "Macbeth," of course, and the sanatorium also serves as a metaphor for a contemporary world recently in the grips of plague (and, some would say, madness).

This being Shakespeare -- whose elastic language almost always offers opportunities for contemporary relevance -- one can find vague allusions to Covid in the text without much stretching. In Scene One, the Weird Sisters, who wear surgical masks in this "Macbeth," announce, "Fair is foul, and foul is fair; / Hover through the fog and filthy air." Later, when these witches vanish before their eyes, Macbeth explains to Banquo that they have disappeared, "Into the air, and what seemed corporal / Melted, as breath into the wind."

Toward the end of this production, when the witches visit Macbeth once again, part of their torment includes stabbing him in the arm with a syringe.