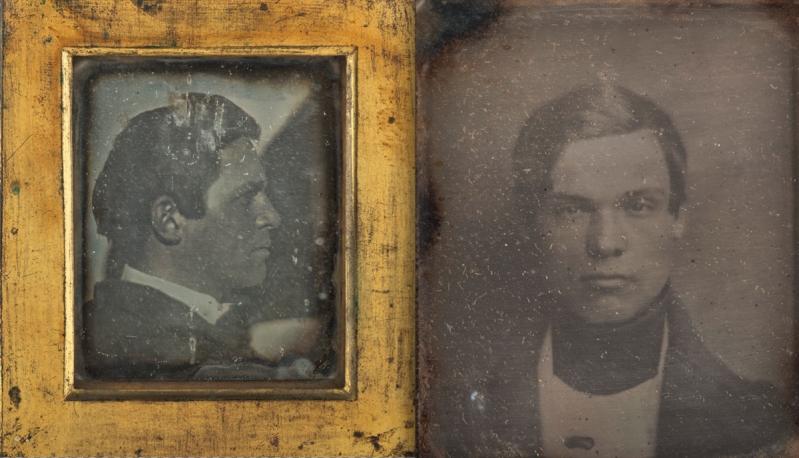 The daguerreotype portrait of Henry Fitz Jr. from January 1840, left, was one of the earliest surviving photographic portraits taken in America. On right, "Portrait of Young Man. Possibly Henry Fitz Jr."
Hindman Auctions
By Jennifer Landes

On Monday, a trove of early photo portraits recently found in Peconic in an unheated shed were auctioned by Hindman Auctions, a Chicago-based company, in its Cincinnati office.

The photographs were offered as a single lot comprising 23 daguerreotypes, one tintype, one carte de visite, and oil paintings of Henry Fitz Jr. and his wife, Julia Wells Fitz. The lot had an estimated sales price of $150,000 to $300,000 and sold for the high estimate.

The Henry Fitz Jr. Archive of Photographic History was formed between 1840 and 1842, with portraits of Fitz and his family that are some of the earliest known portraits taken in America.

Long forgotten, the 23 daguerreotypes were called a national treasure by Grant Romer, a photo historian and curator emeritus of the George Eastman Museum in Rochester. They and their whereabouts were last mentioned in the 1930s.

Fitz, who died in 1863, was a telescope maker in New York City who helped make the first patented camera in this country. According to representatives of the auction house, "he sat for some of the earliest successful photographic portraits taken in America in January 1840, including a small profile image found in the recent discovery." Surviving portraits from this time are very rare, they added.

Daguerreotypes captured images by making a silver-plated sheet of copper sensitive to light. A description of the process first came to America from France in 1839. Among those with the technology and understanding to make such images, it begat a race to produce photographs that could easily be sold to consumers.

According to Hindman, "Fitz, along with partners Alexander Wolcott and John Johnson, won the race." A trip to France to learn more about the process and his understanding of optics were key to his ability to help develop the first patented camera in America. In 1840, he also operated Maryland's first photo studio, in Baltimore, where his father lived. He returned to New York City in 1845, according to the International Center of Photography.

Mr. Romer noted that the "collection in toto represents an extraordinary opportunity for scholars to understand the first few months of the development of a technology and art that would change the world. It really demands to be preserved."

Such a large number of early photographs from a known source and known subjects within this specific timeframe is unique, the auction house said. "While single images from this period exist, most are anonymous, undated, and orphans floating in the historical ether. By contrast, the Fitz archive can be quite tightly dated to have been produced between about January 1840 and the fall of 1842. It was during these 36 months that photography in America sprang to existence and emerged as a commercial enterprise."

The collection was passed on through Fitz's son George Fitz, who died in 1934. Its existence became known initially around the time it also effectively disappeared in the shed George used as a workshop and office in the family house in Peconic.

Harry Fitz, one of George's siblings, donated his own group of early daguerreotypes of the family to the Smithsonian Institution, where they became part of the National Museum of American History's collection. Hindman said that included in that group "was a portrait of their father claimed by the Fitz family to be the earliest self-portrait of a living human." Harry Fitz also told the Smithsonian they could build on the collection by contacting George "to acquire additional historically important Fitz family property, but nothing came of it."

George Fitz's collection was finally rediscovered early last year, when the Peconic property was in the process of being sold.

"Any scholar interested in the history of photography in America has heard of Fitz and knows that he sat for some of the earliest portraits taken," said Wes Cowan, the vice chairman of Hindman Auctions and a 19th-century photography expert. "When I first saw the collection, the hair on my arm literally stood on end."