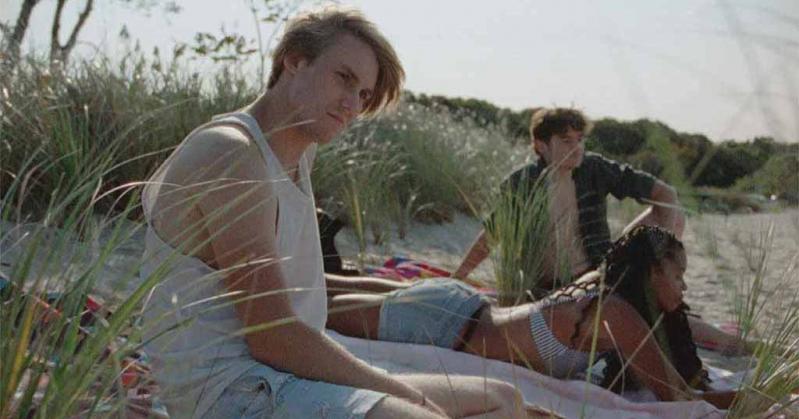 In "The Glass," Matthew Courson plays the lead character, Del, pictured at left, who reflects on climate change and gentrification.
By Christine Sampson

The imagery of water runs through the short films like a theme in the Hamptons International Film Festival's annual "Views From Long Island" program, which features two narratives and two documentaries this year.

Of note is "The Glass," which uses Sag Harbor as a setting for reflection and growth. It begins with an all-too-familiar story: A local family is on the verge of being forced to leave the area, and their son is enjoying one of what viewers can guess is one of only a few remaining nights of revelry.

Class struggles are a driver -- illustrated when the salty characters throw day-old doughnuts from 7-Eleven at BMWs and other fancy cars, observing that "pretty soon, there'll be just millionaires, billionaires, and ticks." Pollution in the water acts as another symbol, and there's reference to the historically Black community of Azurest, which has undergone dramatic racial shifts in recent years. Viewers will learn why the "can in the fridge" mentality is a dangerous way to live.

Standing on its own two sea legs, "The Glass" is the skillful work of Tom Van Scoyoc, who happens to be the son of a local elected official.

Another narrative short, "Good Grief," written by Tess Cohen and directed by Nastasya Popov, is a darkly comedic take on death with a twist of tearjerker potential. A slightly dysfunctional family -- which, in one scene, gets high on marijuana together on Halloween -- scatters the ashes of its late patriarch at the shore in Montauk and bumps up against the traditions of Judaism and the expectations surrounding "the five stages of grief."

The documentary "Radical Love" intertwines different forms of love -- romance, friendship, a sense of physical place and belonging, and a commitment to defending humanity, sometimes at all costs. Written and directed by William A. Kirkley, it chronicles the life and work of Michael J. Kennedy and Eleanora Kennedy, a husband-and-wife legal team who fought for civil rights by defending politically subversive groups and activists. Viewers will especially appreciate an interview filmed three months before Mr. Kennedy's death, in which he reflects on the idea of taking "personal risk to better humanity."

The shorts program's final offering is "The Soul of a Farmer," a documentary that's an homage to agriculture on Long Island and to its "Picasso of the vegetable," Patty Gentry. Ms. Gentry, a former chef, pours passion and a deep respect for the land into her three-acre farm in Brookhaven Town. Produced in rain-or-shine (or snowy) weather, the film captures the precarious balance between the love of farming and the need to make a living at it.

"Views From Long Island" is supported by the Suffolk County Film Commission, which ties together local settings with important social and political issues. Those who miss the Sunday screening can find the films on various online platforms.