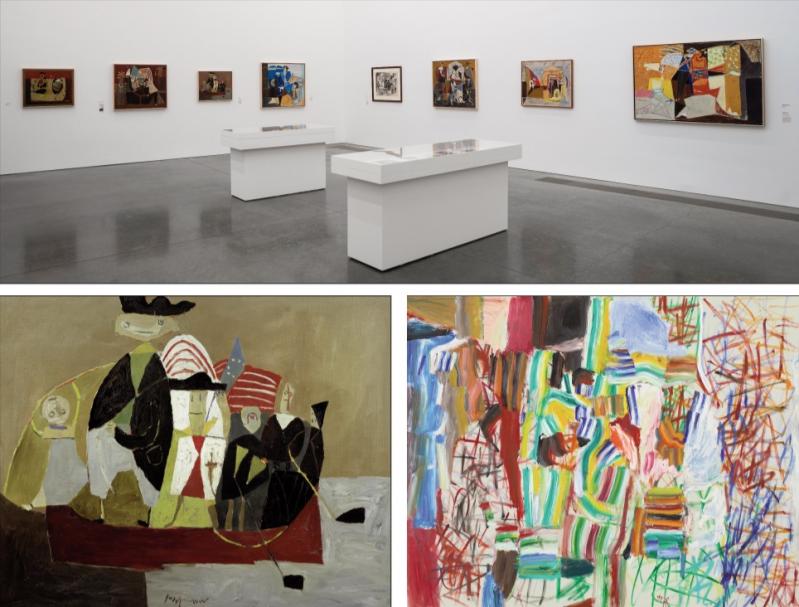 What was there to do after Abstract Expressionism? That clearly was the question that dogged the artists coming up in the mid to later 1950s who sensed that the once-revolutionary style of art was becoming stale and, even worse, trite.

Those who prefer a linear history like to say that a bend toward realism was a reaction to abstraction -- post-abstraction or the pastiche of postmodernism -- but close observers of that same history will find that a modernist take on realism existed side-by-side with the most radical of nonobjective art from its very beginnings.

One artist's struggle to find that new language of art can be seen now at the Parrish Art Museum in Water Mill in its exhibition "Roy Lichtenstein: History in the Making, 1948-1960," which the museum describes as "the first major museum exhibition to investigate the early work of the artist."

That is understandable, given the content. It's not a group of artworks anyone would associate with Lichtenstein, who moved to Southampton in 1970, except for a very few and subtle precursors of what would come to be his mature style. Museums don't often take these kinds of academic approaches to artists anymore, preferring the safe space of blockbuster shows of market-approved exemplars of a given artist's best-known style.

Although the art market and certain dealers can also make lesser-known periods of an artist's work more desirable (see the late periods of Willem de Kooning and Andy Warhol), it typically works the other way, with auction prices reinforcing what is considered "good" versus not so, or even bad.

In the context of graduate school, the undiscovered and the unusual was intellectually stimulating, if not always aesthetically pleasing. Those odd exceptions and experiments offered insight into an artist's process the way preparatory drawings might, yielding secrets and new understanding.

In other words, don't come to the exhibition to be blown away by the familiar Benday dots Lichtenstein applied to every genre of painting: landscapes, interiors, still lifes, portraits, nudes, and so on, after he exhausted the original comic-book material that inspired him to use them in the first place, or even his early hand-painted Pop stylings. Instead, examine and follow the works from room to room, thinking about what he might have been looking at during the time he made them. Read the wall labels carefully and pay attention to what they say while looking closely at each of the works. It's a time to learn and really think about the period covered and what others were doing simultaneously to break the shackles of what had come before them.

There is a group of 90 paintings, drawings, and sculptures (enough to fill the three western galleries of the Parrish) along with some relevant ephemera from more than a decade of work to consider. The sculptures are a welcome surprise, alerting us that although he was known primarily for painting, three-dimensional objects were part of his work from early on.

Although Lichtenstein was born in New York City, the curators suggest the artist's undergraduate and graduate studies in Ohio and his war service in Europe made the kind of impressions necessary to develop themes such as consumerism, appropriation, and satire that would emerge during this time. These same themes would be honed in this era through a series of paintings addressing European modernism, American history, cartoons, and the brushstrokes of action painting.

They note that his appropriation of historical archetypes of explorer, statesman, warrior, knight, and outlaw as well as the female tropes of Madonna and damsel became the precursors of the artist's Pop stereotypes of fighter pilot and girl.

The rest of the mostly chronological installation has themes such as Midwestern Medieval, Mythic America, Painting Machines, Glimmers of Pop, and Comic Abstraction. All of the raw material is in evidence in these rooms. The fascination with childlike expression and the toys and entertainments of childhood are there from the beginning. The American archetypes such as the two versions of "Washington Crossing the Delaware," from 1951 look primitive and so artless that one version could have used thumbprints for faces.

The show includes quite a few wood statuettes, prints, and drawings depicting American Indians -- many more than cowboys. This parody of the American West, the Indian treated as far more interesting than the cowboy, feels like sincere homage, perhaps recognizing earlier than most that American heroics were not always so. It's hard not to think of the generation before of New York School artists who saw themselves as cowboys (Jackson Pollock and Willem de Kooning in particular) when looking at these pieces. Already the next generation was deflating some of that forced machismo.

There are signs aplenty of what was to come. A lithograph of a highly stylized $10 bill pops up in 1956, hinting at an awareness of the Neo Dada impulses taking shape in New York City, but reveals the artist's need to make the object his own.

In 1958, he was making ink-and-brush drawings of Bugs Bunny and Mickey Mouse, included in the show, as well as others from Disney and Warner Brothers cartoons. He painted canvases as well, but according to the curators he later recalled using them as dropcloths while he painted his early Pop subjects.

In the main gallery, a series dating from 1959 features abstract brushstrokes with bands of mostly primary colors. In a quote included on a wall label, the artist said, "I was doing Abstract Expressionism very late . . . and much of that was because it looked like art to me." He would take those same impulses five years later and translate them into his new comic-book style in works like "Little Big Painting," which is part of the Whitney Museum of American Art collection and not included in this show.

For those looking for crumbs in the early days to indicate the explosion of Pop paintings to come just a year or so after, these final works will have to suffice. Otherwise, visitors should come prepared to explore the early meanderings of a world-famous artist, one so tied to a style he worked in for decades that his oeuvre would seem to offer few surprises. This exhibition provides some new wonder.

Lichtenstein Talk
On Saturday, the Parrish will host a talk with Dorothy Lichtenstein and Donna De Salvo on "Roy Lichtenstein and Pop Art: Before & After the Dots." Ms. Lichtenstein, the artist's widow, was once director of the Paul Bianchini Gallery that operated in New York in the 1960s. Ms. De Salvo is a senior adjunct curator at the Dia Art Foundation.

The free program will be offered onsite and streamed at 3 p.m. Registration is recommended through the museum's website. The exhibition will be on view through Sunday.