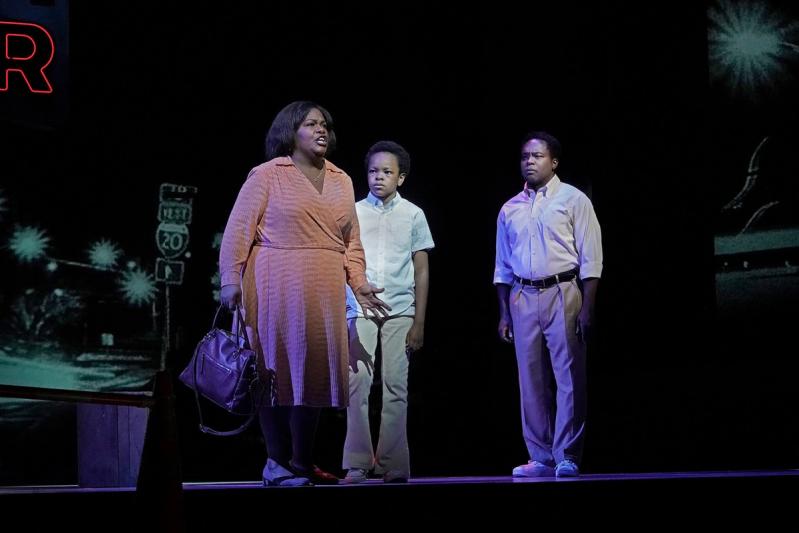 Latonia Moore as Billie, Walter Russell III as Char’es-Baby, and Will Liverman as Charles in Terence Blanchard's "Fire Shut Up in My Bones.”
Ken Howard / Met Opera
By Mark Segal

Opera from the Met
The Met: Live in HD will bring to Guild Hall a simulcast of “Fire Shut Up in My Bones,” the first opera by a Black composer to be presented on the Met’s stage, on Saturday at 12:55 p.m.

Terence Blanchard, a jazz trumpeter who has created scores for films by Spike Lee, adapted the opera from Charles M. Blow’s memoir about his upbringing in rural Louisiana. The libretto is by Kasi Lemmons, a filmmaker and the first African-American librettist in the Met’s history.

The story of a young man’s struggle to overcome trauma and hardship is co-directed by James Robinson and Camille A. Brown, and stars Will Liverman, a baritone, as Charles, and the sopranos Angel Blue and Latonia Moore. Tickets are $23, $21 for members, and $16 for students.

The screening will be preceded at 11 by Bel Canto Boot Camp, whose co-founders Rachelle Jonck and Derrick Goff will discuss current trends in opera and their expectations for its future. The program is free.

Dreaming of Cuba
The Church in Sag Harbor will present two performances of “Top Drawer: Stories of Dysfunction and Redemption from Park Avenue to Havana,” Adelaide Mestre’s one-woman show about her privileged but complicated upbringing, Friday and Saturday at 7 p.m.

The show follows her quest to reclaim her family’s Cuban and artistic heritage by returning to Havana to find her deceased father’s piano, which was left behind when the family fled the island in 1960. She also chronicles life growing up on the Upper East Side with her mother, an opera-singing socialite, and her Cuban father, a gay, manic-depressive concert pianist.

Ms. Mestre moves between music and storytelling, occasionally stepping out of character to address the audience directly. Tickets are $40 at the door or through The Church’s website.

Sondheim and ‘Company’
“Original Cast Album: Company,” D.A. Pennebaker’s 1970 documentary about the recording of the cast album of Stephen Sondheim’s musical, will be shown at the Sag Harbor Cinema on Saturday at 7 p.m.

Presented as part of the cinema’s ongoing retrospective of the films of Pennebaker and Chris Hegedus, the film chronicles the work of the cast and Mr. Sondheim during a 15-hour recording session. “Pennebaker’s film . . . is revelatory in getting under the skin of the main players,” said The Guardian’s review of the film, which was recently released after years of unavailability.

After the screening, Giulia D’Agnolo Vallan, the cinema’s artistic director, will discuss the film with Ms. Hegedus, Frazer Pennebaker, and Ted Chapin, who was present at the original recording session.

Tickets are $15, $12 for senior citizens and people with disabilities, and $7.50 for those 12 and under. An episode of Documentary Now! from its third season, “Original Cast Album: Co-Op,” which parodies Pennebaker’s film, will also be shown.

Classical Music
Music for Montauk will return this weekend with two free concerts. “Bohemian Romantic Trios” will feature an evening of music performed by Hilary Castle on violin, Ani Kalayjian on cello, and Milos Repicky on piano. The concert, with compositions by Joseph Haydn, Jennifer Higdon, and Bedrich Smetana, will take place Saturday at 5 p.m. at the East Hampton Presbyterian Church.

“Shooting Stars,” set for Sunday at 3 p.m. at St. Therese of Lisieux Church in Montauk, will feature a concert by the Overlook Quartet, which is dedicated to discovering and performing music by Black composers. Sunday’s program will feature works by Leila Adu, Eleanor Alberga, and Shelley Washington, and be performed by Monica Davis and Ravenna Lipchik on violin, Angela Pickett on viola, and Laura Metcalf on cello.

Piano Stars Return
The Rising Stars series of classical piano concerts will return to the Southampton Cultural Center on Saturday at 6 p.m. with a performance by Fei-Fei, a winner of the 2014 Concert Artists Guild Competition and a finalist in the 2013 Van Cliburn International Piano Competition.

Fei-Fei has performed with orchestras in Buffalo, Fort Worth, Denver, Kansas City, Austin, and Spokane, and abroad in Canada, Germany, and China. Saturday’s program will include compositions by Beethoven, Rachmaninoff, and Chopin. Tickets are $20 in advance, $25 at the door, and free for students under 21.

Motown Hits
Dr. K’s Motown Revue will bring hits from the 1960s Motown era to Bay Street Theater in Sag Harbor on Saturday at 8 p.m. The 12-member band, which has played at venues ranging from Lincoln Center and the United Nations to Jones Beach and Mohegan Sun, will perform tracks by the Temptations, Marvin Gaye, the Four Tops, and others.

Tickets start at $35; masks and proof of vaccination are required for entry.

Perlman Recitals
The Perlman Music Program’s virtual Stires-Stark Alumni Recital Series will kick off its 2021-2022 series Friday with a performance by Michelle Ross and Doori Na on violin, William Frampton on viola, and Jia Kim on cello.

All concerts will be released for online viewing on Friday afternoons on PMP From Home, which can be accessed from the program’s website.

At the Masonic
The music series at the Masonic Temple in Sag Harbor will feature performances by Chase Allardice on Friday at 9 p.m. and Jetty Koon on Saturday at 8.

A singer-songwriter from Sag Harbor, Mr. Allardice pays homage to both the Greenwich Village folk scene of the 1960s and the Seattle indie rock boom of the late ‘90s. Based in Montauk, Jetty Koon includes Thomas Muse, Abby Levin, William Lucey, and Peter (Bosco) Michne.

Poetry Reading
The Watermill Center's Viewpoints series is offering virtual reading by Jeffrey Perkins of his most recent work on Wednesday at 5:30 p.m. A conversation moderated by Susan Merrell of Stony Brook Southampton will follow.

Mr. Perkins is a queer poet who earned an M.F.A. in poetry at Bennington College, where he received the Jane Kenyon Memorial Scholarship. His poems have been published in Tupelo Quarterly, Adroit Journal, Memorious, Rhino, The Cortland Review, and The Massachusetts Review, among other journals. A registration link is on the center's website.