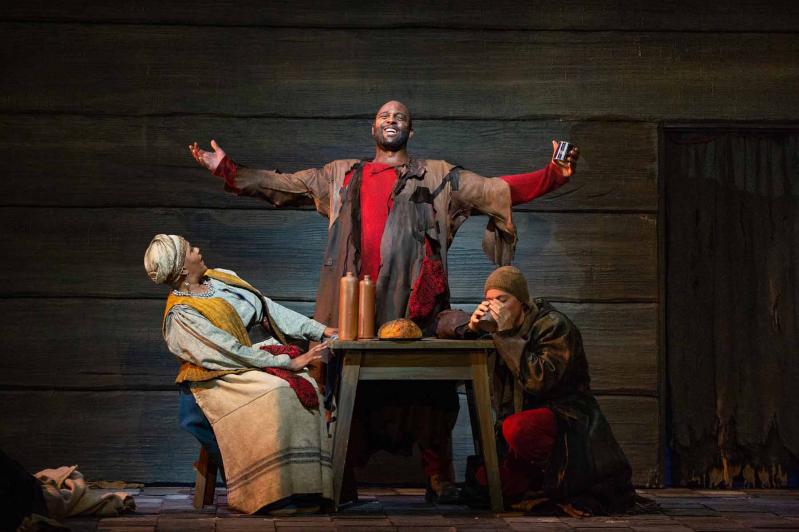 Tichina Vaughn as the hostess of the inn, Ryan Speedo Green as Varlaam, and Brenton Ryan as Misail in Mussorgsky’s “Boris Godunov.”
Marty Sohl/Met Opera
By Mark Segal

After having cancelled its entire 2020-2021 season due to the pandemic, the Met: Live in HD will return to Guild Hall on Saturday at 12:55 p.m. with an encore screening of Mussorgsky’s “Boris Godunov,” the first production of its new season.

Composed between 1868 and 1873, the subjects of Mussorgsky's only completed opera are the Russian ruler Boris Godunov, who reigned as Tsar during the Time of Troubles (1588 to 1605), and his nemesis, the False Dmitriy, who ruled from 1605 to 1606.

Unlike the Met’s 2010 production of the opera, which drew upon the heavily revised version from 1872, the current production is based on Mussorgsky’s original, and leaner, 1869 composition. However, like the earlier production, the current one stars Rene Pape in the title role.

Of Mr. Pape’s 2010 performance, the New York Times critic Anthony Tommasini wrote, “Mr. Pape looks regal and imposing. . . . [he] has vocal charisma as well, and his dark, penetrating voice is ideal for the role.”

The screening will be preceded at 11 by the first of the season’s Bel Canto Boot Camps, during which the BCBC co-founders Rachelle Jonck and Derrick Goff will explore the tradition of Russian choral singing. In operas with political plots, like “Boris Godunov,” the chorus provides the social context in which the action takes place.

Subsequent programs, both live telecasts, will feature Terence Blanchard’s “Fire Shut Up in My Bones,” the company’s first performance of an opera by a Black composer, set for Oct. 23, and Matthew Aucoin’s “Eurydice,” another Met premiere, on Dec. 4. Bel Canto Boot Camps will precede both screenings.

Race, Class, and Egypt
Andrina Wekontash Smith, a Shinnecock writer, actor, and performer, will present “East End Native,” the culminating showcase of her community artist residency at Guild Hall, on Saturday evening at 7.

Part one-woman show and part panel discussion, the program will explore the intersection of race and class on the East End through the lens of her personal narrative. After the first half of the program, which will include spoken word, monologues, and stories, Ms. Smith will moderate a panel discussion with leaders fighting for representation for all of the East End’s residents.

The evening is a benefit for the Shinnecock Youth Clubhouse and Guild Hall’s learning and public engagement initiatives. The clubhouse provides support for Shinnecock youth. Tickets are pay-what-you-can, with a suggested starting donation of $25.

Hamptons Observatory and Guild Hall will present a free virtual presentation by Colleen Darnell, an Egyptologist, on Wednesday at 7 p.m. Dr. Darnell will discuss how astronomy influenced the belief system, art, and life in Ancient Egypt. Registrants will receive a link on Tuesday.