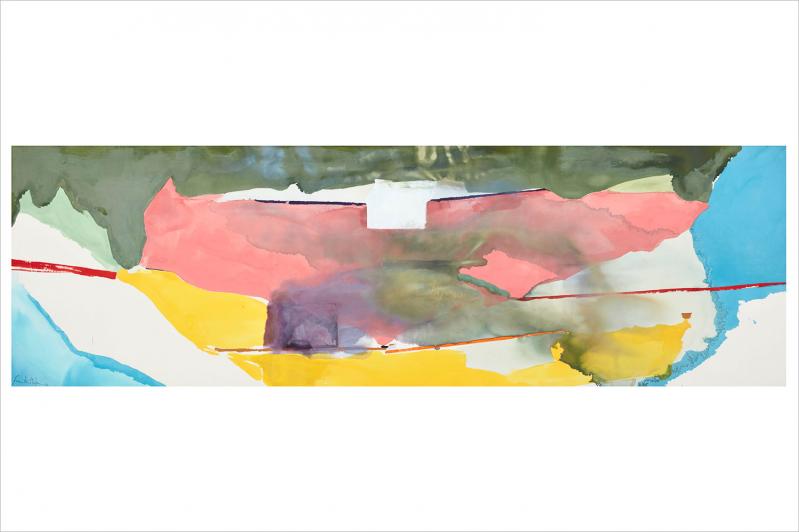 Helen Frankenthaler's "Off White Square," a large wide canvas from 1973, will be offered in the Phillips auction house's November Sale.
Via Phillips
By Jennifer Landes

The New York City galleries and other visual art spaces that have set up shop on the South Fork this year have returned to their urban headquarters in recent weeks. Yet they will continue to operate their local outposts in a "both/and" model through the fall and end of the year, if not longer.

Last month, Phillips auction house took over the space most recently occupied by Pottery Barn on Main Street and Hampton Road in Southampton Village, which was previously Saks Fifth Avenue and once the town hall.

The grand brick building, always a little awkward for retail, makes an exceptional gallery. The expansive interior walls offer a perfect setting for sweeping canvases such as the colossal Helen Frankenthaler "Off White Square."

This is the centerpiece of a suite of four paintings by the artist on view, all made from 1973 to 1981. It was a period when she transitioned into her mature style, marked by more brushwork and thicker, practically bas-reliefs of paint on top of her signature poured areas of color.

The earliest painting in this group and the only one up for auction in November's New York sale, it is also the most exquisite. Earlier Frankenthaler paintings often seem to be the result of early criticism of being too sweet in composition or color. In the period from the 1950s, when she developed her poured method of applying acrylic paint to canvas, to the early 1970s, she seemed to go out of her way to avoid beauty, perhaps in an effort to be taken more seriously as an artist who was also a woman.

Some paintings from that period exhibited last year at the Parrish Art Museum are a case in point. Ostensibly about the allure of Provincetown inspiring her work (in a series of summers she spent there after decamping from East Hampton), there isn't all that much that is beautiful in them. Many eschew color, and the ones that do employ it disharmoniously or include some less than appealing shade of mustard, brown, or mauve that encourages an intellectual response over an aesthetic one. This tendency does not disappear in the years after, but she seems to find a balance.

Decades after the macho mandates of Clement Greenberg's high Formalism have receded, she appears to follow her own artistic instincts and concerns. Starting with "Off White Square," a new confidence is in full flower. She maintains gesture but adds drawing and brushwork. And it is stunning, the kind of composition and palette that could have been expected from her Cape Cod paintings if she had felt free enough to express herself in that way.

Any notions of landscape give way with a grassy green area at top and a sunny yellow ribbon at the base. In between is a kind of atmospheric haze that partially obscures a band of pink. The more the painting is examined, the more confounding it becomes. Bound by a watery sky blue at the lower left corner and a more opaque version of the same hue on the right, it could be considered the antithesis of landscape in some ways. Yet the horizontal orange, red, and ultramarine painted lines are a siren's call, a temptation to situate.

On the wall perpendicular to the main event is "Untitled," one of three works available privately that Robert Manley, Phillips's co-head of 20th century and contemporary art, brought together to highlight the artist's work of this period. A very tall canvas from 1978, it mixes long and wide bands of brushstrokes with the more expected poured paint, in tones of red that range from a faded tomato to a deep dried-blood color, broken up briefly with a few patches of white.

By 1981, when Frankenthaler painted the remaining works on view, she had fully integrated brushwork as well as thick globules of pure color into her compositions, with the addition of a glittery dust that imbues these works with an otherworldly phosphorescence. "Fireball" shares a similar palette with the nearby "Untitled," but in subtler integrated tones.

A few black lines hang in midspace, set at an angle but not intersecting. With the red blotches near either lower corner, there is an asymmetry and calligraphic quality that reads as non-Western. Its mystery is bewitching.

"Tethys," conversely, signals a return to her less appealing palettes, featuring a brackish upper area along with brown blots and blobs drifting about in the bottom third. The majority of the canvas is taken up with a wash of brown diluted by white (or is it white diluted by brown?) with a strange passage of glittery baby blue. At first sight, it's not an easy painting to love. Yet it becomes more compelling over time, offering its rewards generously with the more attention paid to it.

This is a capsule exhibition, but the four works' magnitude and complexity provide a satisfyingly complete experience. Their sensory and intellectual benefits can be striking, but also achingly subtle. They will be on view in the showrooms until Oct. 4.