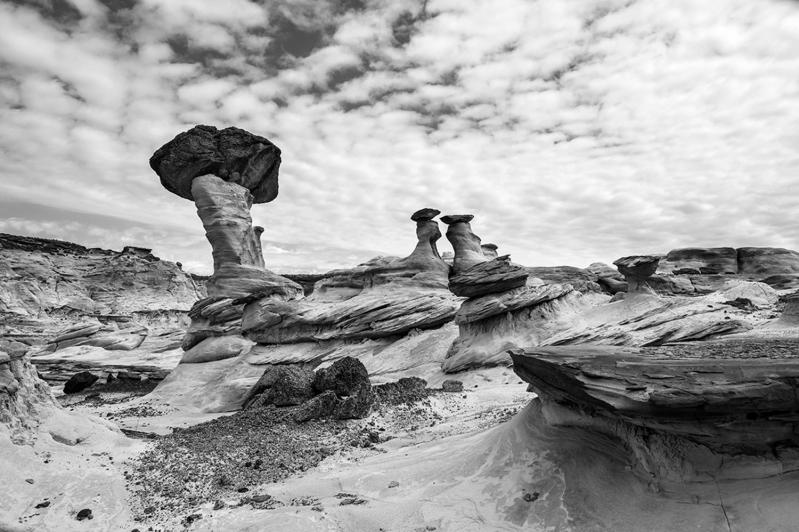 David Salle at Skarstedt
Thirteen drawings from David Salle’s “Tree of Life” series, all made in isolation during the pandemic, are on view at the Skarstedt Gallery in East Hampton through Oct. 6. Each drawing contains a man and woman flanking a single tree in an upper panel, with the tree’s roots in a narrow bottom panel.

Inspired in part by the visual vocabulary of the New Yorker cartoonist Peter Arno, each panel can be seen as a strange, often witty, representation of a Garden of Eden whose couples seem to reflect degrees of boredom, surprise, joy, prurience, even menace. Some of the trees are bare, while others are in the grip of a spiny wormlike creature.

Art historical references, including a couple of Cubist faces, appear among the roots. Each drawing suggests a distinctive narrative.

Priscilla Rattazzi Photos
“Hoodooland,” an exhibition of photographs by Priscilla Rattazzi, is opening today at the Staley-Wise Gallery in SoHo, continuing through Nov. 7. Ms. Rattazzi, who lives in New York City and East Hampton, photographed the weathered, mushroom-like rock formations in southwest Utah known as “hoodoos,” a name brought to the Americas by enslaved Africans.

The exhibition and accompanying catalog are a direct response to a 2017 order from President Trump that two million protected acres in Utah be made available for resource extraction. In 2018, motivated by what was the largest rollback of public lands protection in United States history, Ms. Rattazzi began in earnest to photograph the dramatic landscape.

Three at Rental Gallery
“Love Will Turn You Around,” a show of new work by Sarah Braman, Charles Ly, and Kon Trubkovich, is on view at the Rental Gallery in East Hampton through Oct. 17.

Mr. Ly’s and Mr. Trubkovich’s oil paintings reflect the places and people who have helped shape their art and given them a sense of place. Mr. Trubkovich draws on his Soviet heritage; Mr. Ly is of Vietnamese descent. Ms. Braman’s sculptures suggest themes of home, family, and nature.

Mr. Kresch and the late Mr. Bell were colleagues and friends who lived and worked in New York City during the post-World War II years. Both married artists and both had daughters who, exposed to the artistic movements and controversies of their parents’ generation as well as their own, took up the same profession.

An outdoor reception will take place today from 4 to 6:30 p.m.