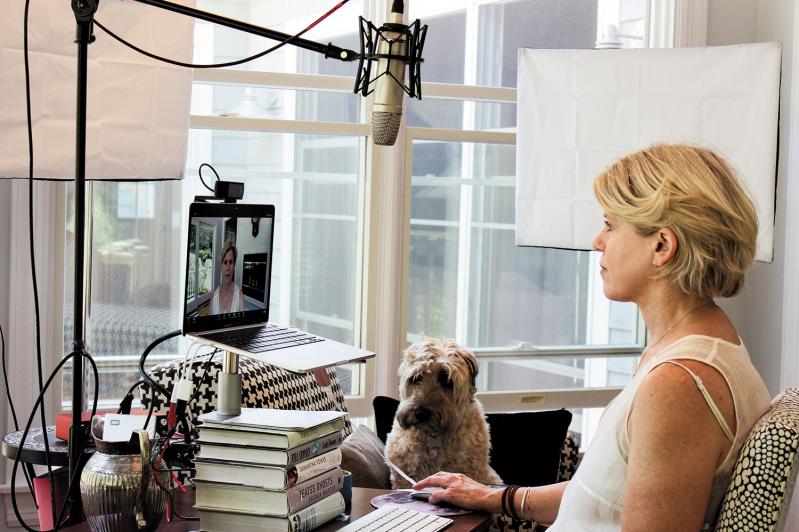 Tracy Thorne will give 16 live performances of her new play “Jack Was Kind” over 25 days from her East Hampton home.
Bella Lewis
By Mark Segal

Spend five minutes with Tracy Thorne, and you know she is not easily fazed, not even by quarantine. Beginning Wednesday, the playwright and actress will give 16 live performances on Zoom from her East Hampton home of her new play, “Jack Was Kind."

The play begins with the line, “How could I just sit there,” a question that could be asked of Ms. Thorne as well.

“It’s just me and my computer, and I just talk for 70 minutes,” she said. When asked what the play was about, she demurred. “There’s a secret, and I’m not going to tell you the secret.” The play began as a series of stories that she read aloud to a friend, who said, “Dude, it’s a play! I want to hear it out loud.”

Another friend once told her, “You don’t write what you know, you write to find out what you know,” which she said has always been her experience. When she started writing the play, she fully expected the protagonist’s husband and her children to show up, “and an hour and 10 minutes later nobody had shown up and it was a complete experience.”

“Jack Was Kind” is centered on a real event in America, “a very small gesture that we will all remember when it gets revealed.” The protagonist is a privileged white woman, and the play examines “what her privilege has wrought in our culture. It’s about how power is built, brick by brick, in families, which then affects Americans in Kenosha, in Minneapolis, all over.”

Once she'd finished the play, she insisted that her agent ask theaters if she could come and read it to them. “I saw the density on the page and thought, nobody’s going to read that. Half the joy of reading a play is that there’s so much white on the page.”

Plenty of theaters said no, but she persisted, contacting directors, theaters, and friends. “I called one director who runs a theater in New York. She had just had a baby, and I read her the story walking in Central Park while she nursed her baby. We changed the diaper during the story.”

Eventually it got to Nicholas Cotz, the executive and producing director of All for One Theater, a Manhattan venue devoted exclusively to solo performances. Their 2020 season was already booked, but they asked her to do three performances on Zoom, all of which sold out. Once the pandemic hit and the theater had to close its doors, Mr. Cotz decided to produce “Jack Was Kind” virtually.

“Lots of things on Zoom are fabulous, but you wish they weren’t on Zoom,” said Ms. Thorne. “This play is meant to be viewed on a screen. We did some tweaking of the text to make it exactly what you are doing. You’re meant to push a button and watch.”

Because “white privilege is on the table now,” Ms. Thorne, Mr. Cotz, and Jami Floyd, the consulting producer, decided that a 20-minute discussion between Ms. Thorne and one or two guests on the subject of complicity in American power structures would follow each performance. Ms. Floyd, who is the host of WNYC’s “All Things Considered,” will select the guest speakers.

“We all felt we should seize this moment, when people are making political decisions, and take this tiny little story about a privileged woman and the power it has, out into the world.” Ms. Thorne stressed that the play doesn’t take sides. “I hope it is meaningful to people on both sides of whatever national divide we’re experiencing now. I’m not selling a point of view.”

Ms. Thorne was born in New York City and raised in Hastings-on-Hudson. Because her mother worked in the theater, she was surrounded by that world early on. After majoring in history at Smith College, she attended the London Academy of Music and Dramatic Art, then returned to New York and immediately found acting work.

“Acting was my straight job and I made a good living at it.” She cited playing Honey in “Who’s Afraid of Virginia Woolf?” under the direction of Matthew Warchus, the head of Old Vic, as one of the greatest artistic experiences of her life. “Acting was great, but there is a lot of nonsense. I had an agent once who said you should never take a job that you don’t want your kids to find on late-night TV. I have two daughters. With my plays, I don’t have to worry about that.”

She always wrote on the side until eight or nine years ago, when she gave up acting to focus exclusively on writing. “I came cheap for this play, that’s why I got the job. I was available and not expensive.” She still does voiceovers, in her closet, to make money; has written a screenplay, and is about to finish her third TV pilot.

The current production of “Jack Was Kind” has presented challenges. While she sits at her computer, during each performance family members and friends must take shifts as handlers in the basement to keep their dog happy so she doesn’t bark. Because Ms. Thorne has to turn off her email, phone, and any other alerts, the theater, which is monitoring the audience and all the feeds in New York, must text the handler if problems arise.

Ms. Thorne and her husband, Edmund Lewis, a contractor, renovated a brownstone in Harlem 20 years ago. “We raised our family as white people in Harlem, in a neighborhood where we were not the dominant culture.” Having her daughters Bella and Mabel learn about another culture as they grew up “has been a pleasure of my life.” They bought their house in Springs 16 years ago.

Among the influences on her writing have been Samuel Beckett, Harold Pinter (“I steal his style”), and Edward Albee (“I steal his outrageousness.”) She also cited August Wilson, Mfoniso Udofia, a Nigerian-American playwright, Zadie Smith, and Elena Ferrante as important sources of inspiration.

Speaking of “Jack Was Kind,” she said, “What I’m good at is telling the story of what it feels like to just sit there, and it’s not necessarily an attractive story. Some people will think she is the hero of the century, while others will think she is so complicit we shouldn’t spend time with her. And that’s the point. I’m really good at writing about what things feel like.”

The play will run Wednesdays through Saturdays at 8 p.m. through Oct. 10. Single-viewer tickets are $10, with a limited number of $5 tickets for artists, students, and those unable to pay more. Tickets are available at afo.nyc.