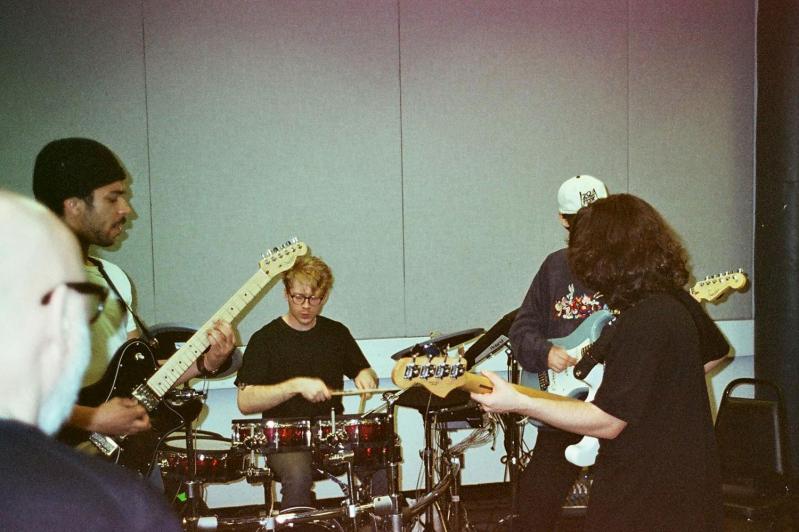 Anthony Genovesi, center, was the drummer in the Broadway production of "Sing Street," before it shut down in rehearsals due to the pandemic.
By Jon Kuperschmid

Anthony Genovesi, the drummer in the Broadway musical "Sing Street," has had a drum set in his house for as long as he can remember.

"I've always played a little bit starting from around 4 years old, but it got serious at 12-ish, when I joined my first band," he said the other day. A 2019 East Hampton High School graduate, he never planned on being a professional musician until his teens, and once he had made that decision he "never looked back, no backup plan," which he "would later find out is really inconvenient during a global pandemic."

"I was in a practice room at City College," Mr. Genovesi said of the moment he received the news that he had been cast in "Sing Street," and "after I hung up the phone, I knew my life was changing in a big way."

The play is set in the music scene of 1980s Dublin, where Declan, played by Mr. Genovesi, is the drummer in a band formed to escape home life and win over a girl.

He began working on the show's Off Broadway rehearsals in October of 2019, and from then on he can only recall "a massive, frenetic pool of crazy. I mean that in the best way. I learned so much, as not only was it my first time helping create a brand-new work, but it was my first in-depth experience with acting as well -- a daunting task made easy with the love and support of our creative team and my castmates."

Unfortunately for Mr. Genovesi and everyone else who has a career in the theater industry, the Covid-19 pandemic has ripped those dreams -- and sources of income -- away. On March 12, the day of the shutdown, the "energy in the theater (and N.Y.C. in general that day) was one of the eeriest things" he has ever experienced. The shutdown began on the first day of tech rehearsals for "Sing Street," so just as he was seeing his ambitions realized, his drums booming through a Broadway sound system, the theaters went silent indefinitely.

"I didn't want to spend the rest of my precious time in that theater feeling like garbage after achieving something so big. We played our music loud and worked right up until 5, when we had a big meeting onstage and said goodbye to each other."

The gravity of the news truly hit him when he was walking down 45th Street right afterward and saw "nothing but empty theaters and the occasional news reporter. No one else."

"Sing Street" had an opening night set for April 19, but the lights never came up.

He feels as though he has been suddenly spat out from his parallel-universe Broadway life. "I'm living in East Hampton again, playing drums in my basement, and seeing my dog every day. My family and I are together, healthy, and safe. Right now, that is more than I could ask for."

For many in the theater industry, from front-of-house ushers to Tony Award-winning actresses, there is a communal fear of not returning to work for the foreseeable future. Nationwide, there are about 72,000 people working for theater companies, according to Variety magazine.

"Nobody in the industry can give specific timelines or details about how to proceed -- and nothing's really guaranteed. We will be the last to get our jobs back, because in terms of public health, theater and live entertainment is fairly low priority, which is incredibly frustrating and scary for all of us in the industry," Mr. Genovesi said. "Many of us have families to take care of, debt, and the cost of living in N.Y.C. is ridiculous. Nobody knows how eager audiences will be to return, and it's a notoriously tough environment for shows to become profitable and long-running."

Right now, he is working at Innersleeve Records in Amagansett but is optimistic about returning to the Lyceum Theater. "Humans have had live performance forever, and we will always have it. It's in our blood, we'll manage to make it work. The industry and businessmodels will most likely undergo significant change, but that may end up being a good thing for theater. We'll see."