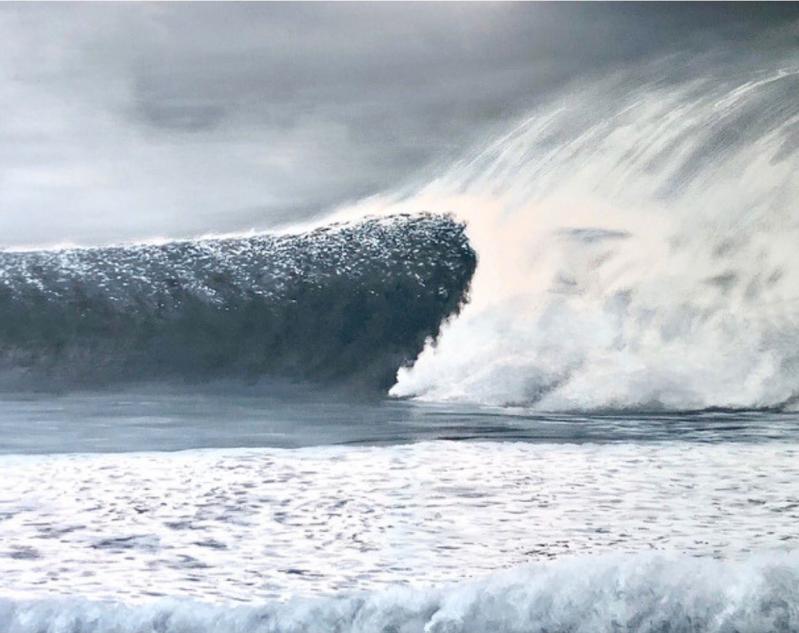 Scott Bluedorn, whose work is above, is one of several artists in both eastern and western Suffolk County who are showing their support for congressional candidate Nancy Goroff on Instagram and other platforms.
By Jennifer Landes

A group of visual and performing artists and writers who support the Democratic candidate for Congress Nancy Goroff have banded together from across the First District to form Artists for Nancy.

Christine Sciulli, a visual artist from Amagansett, is one of the organizers. On a group call this week, she and two fellow members, Tali Hinkis and Alex Hu, discussed their aims in forming the group and their upcoming Zoom forum, "Get to the Core With CD1 Candidate Nancy Goroff," to be held on Wednesday.

Ms. Hinkis, who lives in Stony Brook, began Artists for Goroff. An interdisciplinary artist known for her partnership with Kyle Lapidus under the name LoVid, she met the candidate soon after moving from the city five years ago. "She's a little less known as the president of the board of Gallery North, our local not-for-profit gallery in town," Ms. Hinkis said.

She said she has been happily volunteering for local politicians for the past few years, but "I really had to follow the script of what a campaign thought was best." As an artist, she had other skills she wanted to use and sought "a parallel structure really centered on the arts and artists and the way we organize and work with communities."

Acknowledging the history of artist-run exhibition spaces, she added that artists understand the importance of promoting their work and building a larger community to support one another and their concerns.

Mr. Hu, a community organizer for Perry Gershon, the previous challenger to Representative Lee Zeldin, the incumbent Republican in the race, said there is a broader goal past Election Day, to have Suffolk County rediscover its progressive values.

"People here care about the same things -- a clean environment, clean water, having good, sustainable jobs," he said. "We're trying to tell those stories through arts." Those goals are supported "through a political system, which, for now, is voting for Nancy Goroff." Ms. Sciulli agreed, adding that the effort has built a strong web network.

Members have been meeting weekly since mid-July, and they plan to use a visual vocabulary very different from the usual campaign promotion and design. The organizers' aim is to be as geographically inclusive as possible, while also including a variety of ages and career levels. They said that art can be the unifying force necessary for such a large and unwieldy district.

The group's Instagram account, @artistsfornancy, and a Facebook group have been highlighting the artwork endorsements of its visual artists. Its musician members plan to release an album to support the effort in the first week of October. A postcard writing campaign will incorporate some of the art submitted, along with text.

Ms. Hinkis said she has witnessed how bringing people together around a cultural event can spark activism in her own backyard, where artists have met people from the university and her neighbors. "In a suburban area, we don't have a lot of places for gathering." People vote differently when they know their neighbors and what is important to them, she said.

"Tactically it's a challenging district, roughly 80 miles long and 20 miles wide at its widest point," Mr. Hu noted. "The other hypothesis is that the art community is a fine thread that brings the community together." He said it was amazing to him how quickly it has happened.

Wednesday's panelists will include Laurie Anderson, Skyler Johnson, Tanish Lindsay, Carlos Morales, Maya Schindler, and Kelynn Alder. Carter Burwell will moderate. According to the organizers, the panelists are guests and do not represent the views of Artists for Nancy.

"The panelists are really diverse, and they're going to ask focused questions that don't necessarily show up as bullet points on her website," Ms. Sciulli said. "We're running this panel so we understand her issues and policies."

The panelists will have 15 minutes to question the candidate on topics of their choice. Registrants can submit up to three questions that may be chosen.

The free public forum will be held from 6 to 8 p.m. Preregistration is required.