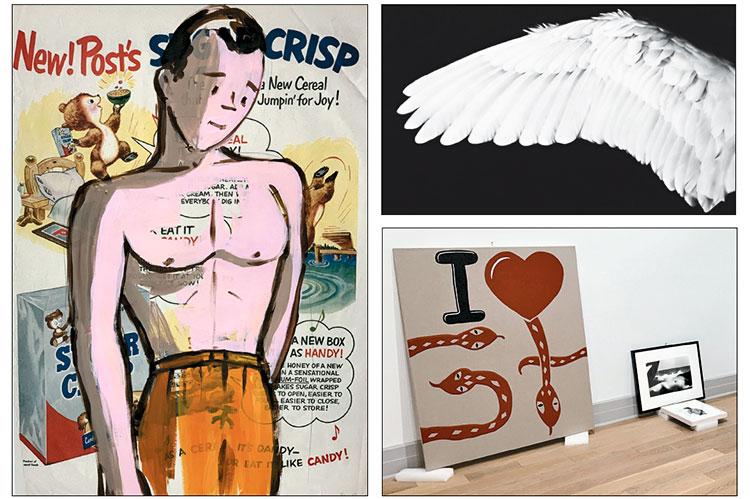 Artwork that will be part of the benefit sale and exhibition for Guild Hall includes David Salle's untitled digital print, left, and Robert Longo's drawing on vellum "Study of Angel Wing," upper right. A photo taken during the show's installation features a painting by Joel Mesler, left, and a photograph by Ralph Gibson.
Guild Hall
By Jennifer Landes

Robert Longo sounds apologetic when he says he's been living here for only a couple of years. Yet, unlike some recent arrivals, he's a neighbor we should definitely embrace. The benefit exhibition he initiated for Guild Hall, "All for the Hall," has given regional artists a chance to show their appreciation for the institution at a time when it needs some help.

"I know I'm a newcomer, but I feel like I've been warmly welcomed by a lot of the artists that I know out here," he said last week. "They have been really great. Some of them have been lifelong friends of mine, like Cindy Sherman," whom he's known since college.

On March 12, he fled the city, as many did, while cases of Covid-19 climbed and the shutdown was imminent. Since then, he has lived in East Hampton full time with Sophie Chahinian, whom he credits with showing him around when he first arrived some two and half years ago. As the founder of the Artist Profile Archive, she has made mini documentaries on many area artists, using their own words to offer insight on who they are and what they make.

"One of the first places Sophie took me was Jackson Pollock's house and grave," he recalled. "I felt a really strong connection and felt it was an important moment for me."

At Guild Hall's opening and gala last year celebrating his friend Ugo Rondinone's exhibition, Barbara Lane, a board member, and Christina Strassfield, the museum's director and chief curator, approached him about mounting a solo show of his work this summer.

With a number of exhibitions scheduled from that fall through this summer, both here and abroad, "at first I felt a little overloaded, but realized it would be great," he recalled. "As an artist you really want people to see your work. Selling your work is important, but you make work for people to see." The museum's gala also coincides with the opening of its late-summer show, and that benefit element was important. He wanted to help.

Then the pandemic hit. "It became pretty obvious to me that doing a one-person show at Guild Hall during this was not the right thing now." Understanding that the gala was a critical part of the institution's funding, "I thought it would really be quite wonderful if this artistic community would come together to help Guild Hall."

He asked for a few days to call some friends to gauge the level of interest. "You have to understand that artists are being bombarded right now with requests of this type all the time." Further, the value of the donation had to be appropriate given what was going on in the world. "Artists aren't going to give you a $500,000 work of art . . . when people are struggling to get enough face masks," he noted.

He called Ms. Sherman and Rashid Johnson first. They said yes, so he kept going with Mr. Rondinone and Tony Oursler, expanding the scope to the North Fork and entire East End. Then artists began contacting him.
It's not only the direct act of giving that Mr. Longo felt would have an impact, but what the donations symbolized. "The idea that artists would help an institution could be an example" for the wealthy people living here "who could write one check and take care of Guild Hall for the rest of the year."

He said his hope is that someone will buy the whole lot and give it to the museum. If not, there are pieces that will be priced as low as $500, making a purchase more accessible than at the typical summer benefit auction. The range of artists and the generosity they have displayed in not sharing in the proceeds of the sale "blows my mind," he said.

Andrea Grover, the director of Guild Hall, said there is eagerness to engage with art again on all levels, which could also be seen in the success of this year's clothesline art sale. "The clothesline sale exceeded our goal by double," she said. "We downsized dramatically our goal, but almost had the same profits as a regular year."

She pointed to the spate of galleries from the city opening up locally, which she heard are doing well. The reason, as she sees it, "is people need the comfort that art provides right now."

At first, Mr. Longo thought it made sense to cancel his original show to focus only on the benefit exhibition. "I was excited about doing a show there, but this took a back burner to everything else." Instead, it's been rescheduled for next summer. "I don't know if it's going to be the same show. Who knows what's going to happen in the world?"

Given his oeuvre and the subject matter he has chosen over the past few years, he is better positioned than most to figure that out. Works that date to the shooting of Michael Brown in Ferguson, Mo., during the summer of 2014 and beyond look as though they could have been done yesterday in reaction to the current moment. "Artists tend to have the Cassandra curse," he noted. "We can see the future but nobody wants to listen to us."

From the very beginning, he said, his work has been political. "I think making art is a political gesture, period. Around 10 years ago that volume got cranked up to 11 and I really went heavy when Ferguson happened."
Shocked by what he was seeing in American streets as armored vehicles confronted protesters, he wanted people to focus on these images and what was happening in the country. He has donated a share of the sales of that series to legal defense funds and related organizations.

In the aftermath of George Floyd's death in May, "all of the sudden people are actually seeing cops beating up people." It's much more visible, he said. Although now he has more material than ever to work from, "ironically maybe I don't have to do those images anymore. I don't know. I'm in a very confused place right now."
He said the small studio he keeps in a basement as he awaits moving into a new place in Northwest is "a storm of chaos right now."

The new reality brought on by the pandemic has made him more of a "day to day person." Used to working 10 out of 24 hours, "I'm living more of my life than I ever have before. I make dinner. I mean dinner, what the fuck is that?"

He said he misses restaurants and strangers. Recently he began going back to the city  two days a week to reconnect with his studio there while he prepares for upcoming shows in the fall and spring.

As for next summer's Guild Hall show, the original scheme was to show his large-scale charcoal interpretations of Abstract Expressionist paintings by artists such as Pollock and Willem de Kooning (with a couple of twists) in one room. The other gallery was to hold newer work such the "Destroyer Cycle" and a triptych addressing "the sins of America," with images of Native Americans, cotton fields, and opioids. The overall theme is "a house divided," he said.

He is not sure whether next year's show will be the same. The Ab-Ex room will likely remain. Depending on the outcome of this year's election, he said it might "be a dark one."

"All for the Hall" opens on Saturday and will be on view through December. The works will be available for purchase on a first-come-first-served basis. Mr. Longo's contribution will be auctioned as a tribute to his efforts.