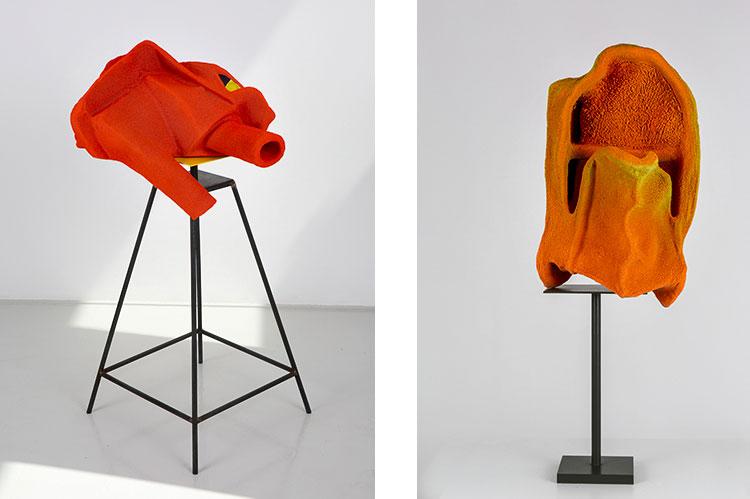 Shechet at Pace
“Together,” an exhibition of 12 new sculptures by Arlene Shechet, will open Saturday at the Pace Gallery in East Hampton and remain on view through Aug. 30. The sculptures evolved out of a conscious decision by the artist to make work that was radiant during the dark early days of the pandemic.

Ms. Shechet applies thickly layered, effusively colored glazes to complex hollow forms made of ceramic and powder-coated steel. The forms are cantilevered in a variety of positions on colored steel supports. Titled after the hours of the day, the works allude to the medieval Books of Hours and, by implication, to the marking of time during quarantine.

Phillips East
The Phillips auction house has opened in Southampton with an exhibition of 20th-century and contemporary art, design, jewels, and watches. The centerpiece of the show, Jean-Michel Basquiat’s “Portrait of A-One A.K.A. King,” has not been seen publicly in more than 30 years. It will be offered in Phillips’s November evening auction in Manhattan for $10 to $15 million.

Tripoli's Back
The Tripoli Gallery in Wainscott will resume its exhibition schedule on Saturday with “Six Hot and Glassy,” a show of artworks related to surfing and waves by Katherine Bernhardt, Ashley Bickerton, Katherine Bradford, Sabra Moon Elliot, Herbie Fletcher, Roy Fowler, Mary Heilmann, Yung Jake, Liz Markus, Dan McCarthy, Alexis Rockman, Lucien Smith, and Lucy Winton. The gallery is open by appointment only. The show will run through Sept. 28.

New at Harper’s
“AEAEA,” an exhibition of eight paintings by Alejandro Cardenas, an artist from Los Angeles, is on view at Harper’s Books in East Hampton through Sept. 17. Inspired by the seascapes of the East End, Greek mythology, and the Covid-19 pandemic, the paintings feature meticulously rendered environments inhabited by surreal faceless figures in expressive poses, their contours filled with bands of colors.

Eclectic Mix
“Open Air,” an exhibition of work by 15 emerging and midcareer artists, will open Saturday in an industrial garage space at 4-10 Sherrill Foster's Path in East Hampton. Works will be hung salon style, with both front and back doors open to create an open-air feeling. An eclectic mix of painting and sculpture organized by Tong Art Advisory, the exhibition will be open Wednesdays through Sundays from noon to 6 p.m. through Sept. 7.

“Field of Dreams” will also include original programming, such as evening projections on the museum’s facade and live performances that engage the building and grounds.

Distanced Sculpture
More than a dozen works by Hans Van de Bovenkamp have been installed by the Louis K. Meisel Gallery along Montauk Highway in Water Mill, Bridgehampton, and Sagaponack.

Working primarily with bronze, nautical stainless steel, and aluminum, Mr. Van de Bovenkamp, a longtime Sagaponack resident, is often inspired by myth, symbol, and nature. A printable brochure with descriptions and directions can be found at meiselgallery.com.

Going Solo at MM
MM Fine Art in Southampton will open exhibitions of work by Strong-Cuevas, Christophe von Hohenberg, and Cornelia Foss with a reception Saturday from 6 to 8 p.m.

Strong-Cuevas’s sculpture reflects interests in positive and negative space, physics and spirituality, and outer space and inner consciousness. Mr. von Hohenberg will show work from his upcoming book of bleached-out beach photographs, “The White Album of the Hamptons.” Ms. Foss’s paintings capture the beaches and landscapes of the East End, her Bridgehampton garden, and Central Park.

Both exhibitions will run through Sept. 7.

Art Fair Returns Online
Market Art + Design, which launched in Bridgehampton 10 years ago, has returned in virtual form with works from 45 galleries around the world, including Lawrence Fine Art in East Hampton, Kathryn Markel Fine Arts in Bridgehampton, and Sara Nightingale Gallery in Sag Harbor. The show can be seen through Sept. 7 on 1stdibs.com.

This article has been modified from its original and print versions to acknowledge that the "Open Air" exhibition has been organized by Tong Art Advisory and includes work by 15 artists, not 16.

Trees, Wreaths for Sale in Amagansett
Holiday Cheer Is Coming to Sag Harbor
Even More Thanksgiving Options From the Pike and Old Stove
END_OF_DOCUMENT_TOKEN_TO_BE_REPLACED