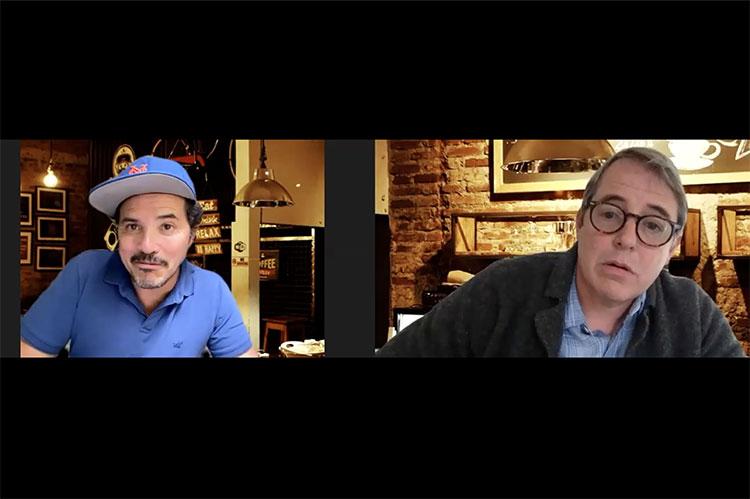 John Leguizamo and Matthew Broderick in "The Pack," a benefit for Guild Hall
By Mark Segal

The plays are the thing at Guild Hall, both virtually and live, starting Sunday with “The Pack: Short Comedies by Eugene Pack,” three plays featuring stellar casts that will be available via YouTube Live at 8 p.m.

Mr. Pack, a Drama Desk Award winner and Emmy nominee, is the creator of “Celebrity Autobiography,” which ran on Broadway and has been performed internationally. The show, which features readings from celebrity autobiographies by a rotating cast of noted actors, has been a summer fixture at Guild Hall.

Tickets, which are $50 per household, can be purchased on Guild Hall’s website.

Starting next Thursday and continuing nightly through Aug. 23, Guild Hall will present Plays in the Backyard, outdoor performances presented at 8 p.m. in the open air theater behind the building.

Of the four plays, two, Albert Camus’s “The Fall” with Ronald Guttman on Friday, Aug. 21, and “The Gin Game” with Mercedes Ruehl and Harris Yulin on Aug. 22, have sold out, although a Guild Hall representative said they hoped to schedule a second performance of “The Gin Game” at a future date.

The series will launch with “tenderly,” a new play by Ida Esmaeili starring Nate Janis and Ms. Esmaeili and directed by Rebecca Miller Kratzer. When Will’s professor suggests he seek Alina’s insight for a paper on Iran, he doesn’t expect to meet the woman of his dreams. However, when her visa renewal is denied early in their relationship, they have potentially life-changing choices to make.

Ms. Esmaeili, a Swedish-Iranian actor and playwright, explores whether marriage can be tainted and how immigration issues can alter lives and relationships.

“Heisenberg,” by Simon Stephens, will conclude the series on Aug. 23. Directed by Austin Pendleton, an award-winning director and actor, the story takes off when, in a crowded London train station, George sees Alex, a much older man, and plants a kiss on his neck. As its title suggests — Heisenberg postulated the uncertainty principle in quantum mechanics — the play is a look at life’s unpredictability.

Tickets are $50 for each of the two plays, and each ticket buys one lawn circle, which can sit one or two people. Guests have been advised to take blankets or lawn chairs, as seating is not provided.