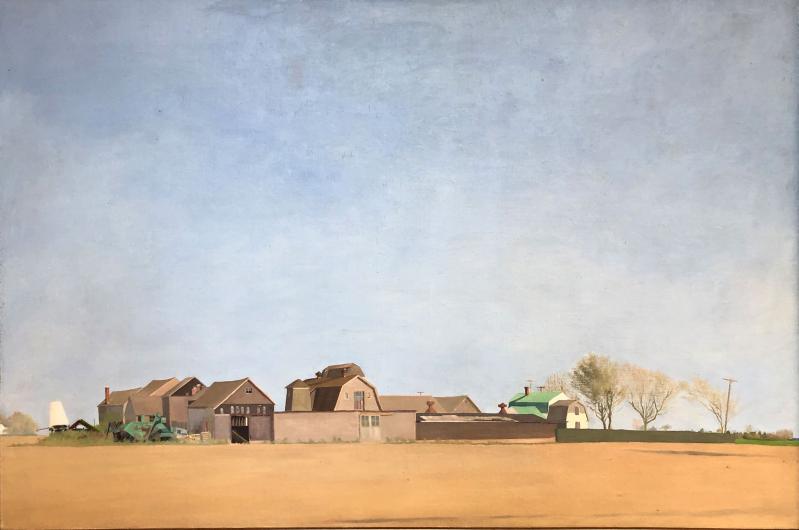 Sheridan Lord, as an inspiration for Terry Elkins, is part of the group exhibition "Under the Influence" at MM Fine Arts.
By Mark Segal

Halsey McKay Gallery in East Hampton has a new group exhibition of new paintings and sculpture by James English Leary, Milena Muzquiz, Hilary Pecis, Ryan Steadman, and Johannes VanDerBeek in its ground floor space. Upstairs, there is “I Am the Oncoming Voices,” a solo show of paintings by Maysha Mohamedi.

Ms. Mohamedi’s boldly saturated formal compositions begin as feelings or events translated into specific words she looks up in her Persian-English dictionary. The Farsi alphabet becomes the inspiration for the Iranian-American artist’s abstract linear mark-making.

The shows will run through Aug. 23.

“Chiaroscuro: Shadow and Light,” an exhibition featuring traditional, digital, and alternative photographic processes by members of the East End Photographers Group, will open today at the Water Mill Museum and remain on view through Aug. 16.

The show includes work by Gerry Giliberti, Jennifer Heffner, Janis Hurley, Joanna McCarthy, Rosa Scott, Mark Testa, and Nick Tarr, among others. A reception will be held Saturday afternoon from 5 to 7.

William King at the Heckscher

When the Heckscher Museum of Art in Huntington reopens on Saturday it will feature “Balancing Act: Three Sculptures by William King.” The East Hampton sculptor, who died in 2015, was known for his ability to breathe life into static, often precariously balanced, representations of human figures.

The three pieces, all from the museum’s collection, are being shown together for the first time. Referring to the social distancing required in the museum, Karli Wurzelbacher, its curator, said, “I’m thrilled that King’s freewheeling figures can populate the space and greet our visitors as they return.”

“Colors of Hope,” the Artists Alliance of East Hampton’s first virtual exhibition, will launch Saturday on its website and continue through Sept. 7. Inspired by the pandemic, 37 member artists have created works that chronicle contemporary concerns or provide relief from anxiety. The show includes painting, drawing, sculpture, photography, glass, collage, and mixed media. For interested collectors, contact information for the participating artists is on aaeh-virtual.org.

“As I See It,” an exhibition of landscapes and seascapes by Bruce Lieberman, will open at BCK Fine Arts in Montauk with a reception tomorrow from 4 to 6:30 p.m. and continue through Aug. 17.

Mr. Lieberman, who lives in Water Mill, sees his work as the search for a modern vocabulary for representational painting. His powers of observation of nature and his domestic life are complemented by his knowledge of art history, which informs some of his compositions, as well as modernist theories.

Chase Edwards Contemporary in Bridgehampton will present “A Different Perspective,” concurrent solo exhibitions of sculpture by Jim Rennert and paintings by William Nelson, from Saturday through Aug. 18, with a reception set for Saturday from 6 to 9 p.m.

Mr. Nelson juxtaposes within single canvases images of Hollywood film icons and comic book characters, such as one with Janet Leigh screaming in the shower while SpongeBob SquarePants hovers with a loofah. Mr. Rennert’s bronze and steel figures and forms of men in suits comment on concepts of corporate success and the obstacles faced by the modern white-collar working man.

MM Fine Art in Southampton will open two new exhibitions on Saturday with an indoor-outdoor reception from 6 to 8 p.m. “Under the Influence” pairs contemporary artists with the artists who have influenced them, including Dan Rizzie with Donald Sultan, Edwina Lucas with John Alexander, Terry Elkins with Sheridan Lord, Rainer Andreesen with William Merritt Chase, and others.

“Strands, Threads, and Metabolic Meditations” is a solo exhibition of abstract paintings by Irina Alimanestianu, whose biomorphic forms, rendered through color and shape, examine the invisible relationships between objects and their environment.

The exhibitions will continue through Aug. 16.