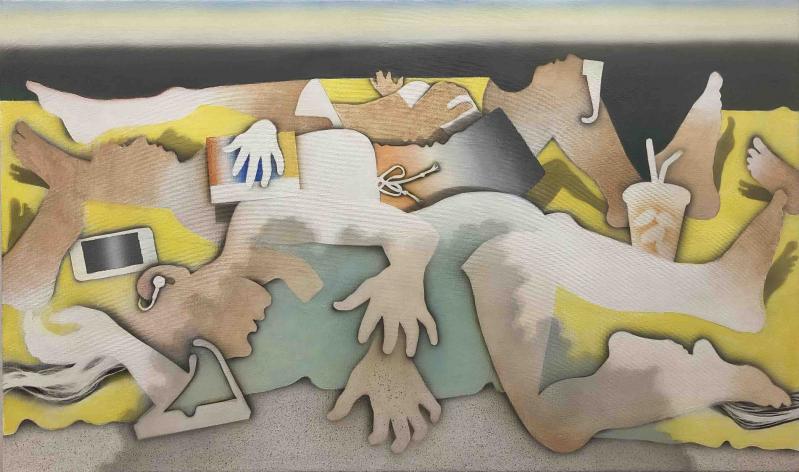 Both artists and writers in the show "2020 Vision," among them Alexi Worth, above, were invited to address the pandemic and the Black Lives Matter protests in their contributions.
By Mark Segal

When David Kratz and Stephanie Roach were invited to organize a summer exhibition for the Southampton Arts Center, they had a number of different ideas. But when the pandemic took hold in March and they realized it would dramatically change the world, they decided the show needed to address that crisis.

Guided by the conviction that artists are the antennae of society, Mr. Kratz, a painter and president of the New York Academy of Art, and Ms. Roach, who is the director of the Flag Art Foundation in New York City, began to solicit artists' thoughts on living and working during quarantine and what life would be like afterward.

"But as we were really deep down that road, George Floyd was murdered," said Mr. Kratz. "We started to think we could no longer do a show that just focused on the coronavirus, because there was something equally important happening." They had already chosen a title for the show: "2020 Vision," "and we were lucky, because it really is a look onto the current year through the lens of these two major events."

The exhibition, which will open on Saturday, includes work by 42 visual artists and 18 writers. "When everything was in lockdown, it seemed extremely challenging to organize a show," said Ms. Roach. "But everybody we contacted was very receptive and wanted to share what they were going through."

Some of the artists elected to show existing work they felt was thematically relevant, while others created work during and in response to the pandemic and the Black Lives Matter protests. Steve Mumford, for example, roamed the city during the protests and made drawings on the spot of what he was seeing.

Chris Wilson is represented by a vibrantly colored painting of a Black funeral in Baltimore, while Rachel Lee Hovnanian's installation of two computer monitors at opposite ends of a dinner table is a comment on social distancing. Clifford Owens is showing a series of street photographs made during the protests.

"I've always had this dream of doing a show that included written pieces along with visual imagery," said Mr. Kratz, "because I think they're both equally important in storytelling and in capturing a mood or a feeling or a time."

Among the written pieces are a view from an emergency room doctor in Harlem, a discussion of the economic impact of the pandemic by a Yale economist, and a reflection on the shuttering of Broadway by a playwright.
Quotes from each of the written pieces will be interspersed on the gallery walls among the visual artworks. QR codes on their wall labels will link to each written work, and a catalog will be available online, as will a film of the entire exhibition.

"We knew, given the current situation, that attendance would have to be tightly controlled, so we worked really hard to give the show a big virtual presence so it could reach a national audience," said Mr. Kratz.

Among the writers are Paine the Poet, a formerly incarcerated speaker and spoken-word artist, J. Kenji Lopez-Alt, a chef and author of "The Food Lab," Vivek Murthy, a former United States Surgeon General, Wendy Olsoff, a curator and art dealer, Brynne Rebele-Henry, a poet and novelist, and Emma Gilbey Keller, a writer, journalist, and editor of the exhibition catalog.

Mr. Kratz said the academy had everything up and running online, including classes and critiques, within two weeks of its closure. The real challenge, however, was that "so much of the work we do is based on having live models in the room, in-person demonstrations by master artists, and our teachers are always with the students when they're working."

A live-model session on Zoom that began with 20 students now draws 80 artists every week. The academy's continuing education program has also flourished online. "There were so many people who wouldn't have actually come to the school to take classes, but once it became available in their homes, people from all over the world started taking classes. Now, we will always have them."

Among the public programs planned are a virtual tour of the exhibition, via Zoom, with the curators and tours of the studios of various artists in the show. "2020 Vision" will remain on view through Dec. 27.

The caption for the image has been modified from its original and print version. The image is of a work by Alexi Worth, not works by both Mr. Worth and Andrae Green.