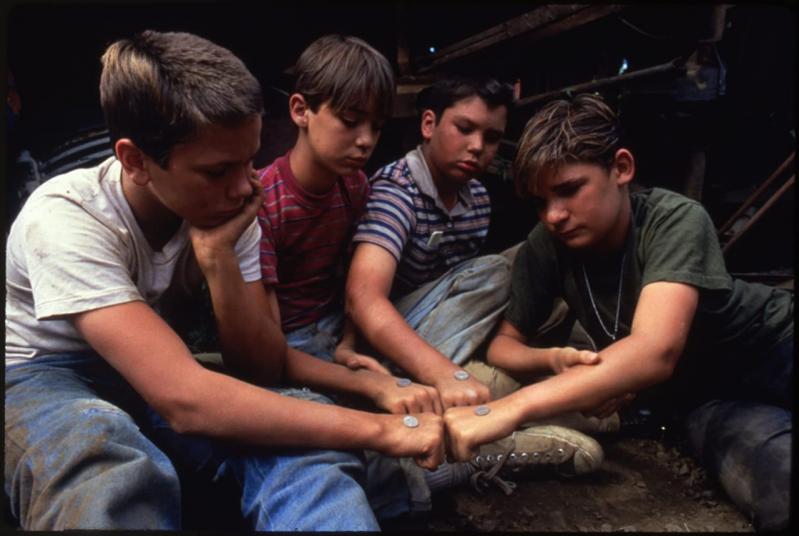 "Stand by Me" is one of the new films announced by Sag Harbor Cinema for its drive-in program at Haven's Beach.
By Mark Segal

Summer Cinema
Sag Harbor Cinema's drive-in series at Havens Beach has announced a new slate of films that capture "the feeling of summer," in the words of Giulia D'Agnolo Vallan, the cinema's artistic director.

It's summer in New York in "The Seven Year Itch," Billy Wilder's romantic comedy starring Marilyn Monroe and Tom Ewell, which will be shown Sunday evening. The film includes one of the most famous scenes in cinema history, when Monroe's white dress takes flight over a breezy subway grate.

Water Power
The Parrish Art Museum will present two onsite programs highlighting the power of water this weekend. "Aquarela," a feature-length documentary that travels from the frozen waters of Lake Baikal in Russia, to Miami during Hurricane Irma, to Venezuela's Angel Falls, will be shown Friday at 8 p.m. on the museum's terrace. It will be preceded by "Blues for the Glaciers," a six-minute film of a Swiss artist playing the blues on a disappearing Alpine glacier.

Tickets are $20, $10 for members; pre-event registration and advance payment are required. Guests have been advised to take chairs, as museum seating will not be available.

"Watershed," an outdoor projection by Anita Glesta on the museum's exterior south wall, addresses dwindling marine life, with images of fish, including the pirarucu of South America, and carp, in flooding water. "Watershed" can be experienced only from Montauk Highway, between 9 and 11 on Saturday night.

'Same Time' on Demand
For those who missed its virtual benefit premiere on July 12, Guild Hall has made available through Aug. 16 the recording of Alec Baldwin and Julianne Moore's performance of Bernard Slade's play "Same Time, Next Year" for $9.99 for a 48-hour rental, through Vimeo on demand. Directed by Bob Balaban, the play features the two stars as George and Doris, lovers who meet once each year for 26 years as their otherwise separate lives evolve.

Bill Boggs, Virtually
Bill Boggs, the Emmy Award-winning TV talk show host and producer, who has a house in East Hampton, has added a comic novel to his résumé. "The Adventures of Spike the Wonder Dog: As Told to Bill Boggs" is the story of an English bull terrier who rockets to fame after appearing with his master on "The Tonight Show with Jimmy Fallon." However, Spike's celebrity comes with a dose of peril he must fight to survive.

Mr. Boggs will talk about his book via Zoom, courtesy of the East Hampton Library, on Tuesday at 7 p.m. Those who register through the library's website will receive a link 15 minutes before the start of the event.

Drive-In Concert
The Chainsmokers, the Grammy Award-winning D.J. and production duo consisting of Alex Pall and Andrew Taggart, will headline "Safe and Sound," a drive-in music concert at Nova's Ark Project in Water Mill, on Saturday at 6:30 p.m. All profits from the event will benefit the Southampton Fresh Air Fund, No Kid Hungry, and the Children's Medical Fund of New York.

D.J. D-Sol (David Solomon), Matt White, a singer-songwriter, and the Jay Schneiderman Band will also perform, and Southampton Village Mayor Jesse Warren will serve as the M.C.
Guests will be able to drive onto the 100-acre property. Each car and its passengers will have a dedicated area of at least 300 square feet from which to watch the show. Tickets start at $225 per person and include a cooler with tequila, mixers, water, games, snacks, and bathroom access. As the prices rise, so do the perquisites, which include a catered dinner from a local restaurant for those paying $700 and up.

More information is available and tickets can be purchased at safeandsound2020.com/jaja.

Bay Street Classes
Bay Street Theater will hold a six-session course, "Introduction to the Joys of Opera II," starting Thursday via Zoom at 4 p.m. and continuing on Thursdays through Aug. 27. Taught by Ashley Galvani Bell, a soprano, and Anton Armendariz Diaz, a stage director, the course will draw upon six important operas to show how music and staging can enhance storytelling. The cost is $150, $25 for individual classes.

Meghan Rafferty, a casting director and actor, will give a class for aspiring thespians about the on-camera audition process for film and television on Saturday from 10 a.m. to 1 p.m. at LTV studios in Wainscott. The class, limited to 10 students, is full, but the wait list can be joined for $175 on Bay Street's website.

Drag Brunch
Our Fabulous Variety Show, the Southampton theater troupe, will present a drag brunch featuring Naomi and Aunt Barb on Sunday morning at 11 at the Inn Spot in Hampton Bays. Tickets, which can be purchased on the group's website, are $15 and include a beverage and entry into a raffle. Brunch and drink specials will be available for purchase. The rain date is Aug. 2.

Perlman's Virtual Benefit
The Perlman Music Program's annual summer gala will continue virtually this summer with a 45-minute musical program "and a few surprises," according to the website, which is where the concert will be presented. The program will feature commentary by Toby and Itzhak Perlman with Alec Baldwin as a special guest.

After a "musical welcome" with a piece by Mozart played by this year's summer music school orchestra, there will be string quartets by Beethoven, featuring students and faculty, and a grand finale by Edward Elgar, "The Snow," for two violins, piano, and chorus. Conducted by Patrick Romano, it will include performances by students, alumni, and faculty as well as Mr. Perlman, who will also conduct the introduction.

The event begins Friday at 5 p.m. and is free. There will be an auction of items and services and the program asks for donations from anyone who is able to support its mission of training young musicians.